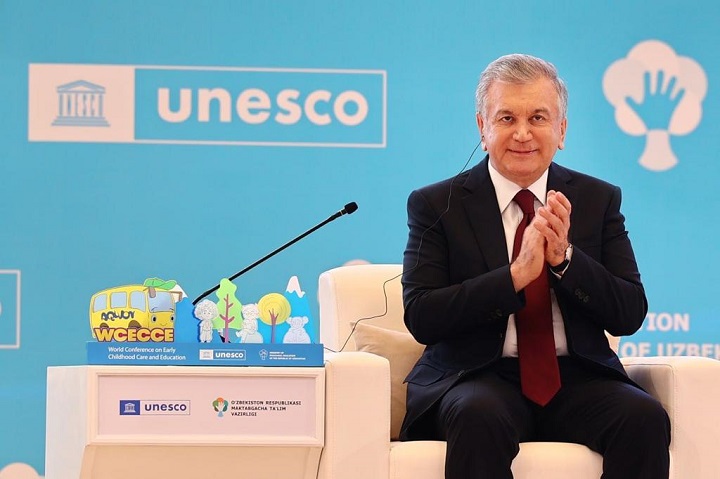 KUN.UZ and other news sites reported that on November 14-16, Tashkent hosted “The Second World Conference on Early Childhood Care and Education (WCECCE).” Speaking at the conference, Uzbek President, Shavkat Mirziyoyev, proposed adopting a special resolution of the UN General Assembly on the outcome of the World Conference, on the importance of educating children, as an important factor in achieving the development of all mankind. It has also been proposed to establish a UNESCO regional center in Tashkent.

Comment:
It is well known that the head of kufr, America and the West, spare no effort in fighting Islam and Muslims by all means. The most dangerous of these means is the cultural and intellectual attack, which is even more dangerous than the military attack. The military attack only kills a person physically on the battlefield.

However, the cultural attack enables the enemy to penetrate homes and poison people’s minds, especially the minds of youth and children, and turn them into obedient slaves to him! The kuffar colonialists implement these attacks through global organizations such as the United Nations and UNESCO that serve their interests with the help of their tools, agent rulers.

From the theme of this conference in Tashkent, it is clear that young children are the target! This is because children are the future of the Ummah. And the plan of the kuffar colonialists is to destroy this Ummah’s future! Of course, the progress of America and the West, as it is called, is wrapped in glossy paper with resonant phrases such as “progress, development, and quality of education…”. This is evidenced by Mirziyoyev’s words that this is “an important factor in achieving the development of all mankind.”

In his book “The Battle of Ideas in the War on Terror,” Robert Satloff, executive director of the Washington Institute for Near East Policy (WINEP), focuses on the importance of winning over the minds of young people in the Middle East. The young people in Central Asia, including in Uzbekistan, are of course no exception. There is no doubt that a cultural offensive has also taken its place in the new US strategy for Central Asia for the period 2019-2025. This conference in Tashkent can be considered as working within the framework of this strategy.

This behavior from the West marks the pangs of death, as the West heads towards death. The reason for this is the collapse of the religious, family, educational and moral values with the West. In the West, adultery, abortion, homosexual sodomy and other vices are considered normal and even legal! For example, on 30 June, 2017, the German parliament approved a bill to legalize same-sex marriage. 393 deputies of the German Parliament voted in favor of legalizing such a marriage! Another example of moral deterioration in the West is that the Guardian newspaper monitored a number of sexual abuses at the hands of members of parliament from different parties, including the Conservatives and Labour.

So it is clear from this the kind of life that the West wants for Muslims by introducing its culture.

“The sexual revolution has begun to devour its children,” wrote Patrick J. Buchanan, an adviser to three former US presidents, in his book “The Death of the West,” stressing the collapse of America, Europe, and the Jewish state, “The statistics on abortion, divorce, collapsing birthrates, single-parent homes, teen suicides, school shootings, drug use, child abuse, spouse abuse, violent crime, incarceration rates, promiscuity, and falling test scores show how this society, in which the cultural revolution is ascendant, is decomposing and dying. Empty nurseries and full waiting rooms outside the psychiatrist’s office testify that all is not well. But before this diseased culture runs its course, it may take the West down with it.” He writes with horror, “Gays and lesbians influenced sex education in our nation’s schools and gay and lesbian libbers seized wide control of faculty committees in our nation’s college[s]. State legislatures nullified laws against sodomy.” He also writes, “Since Justice Blackmun’s decision, 40 million abortions have been performed in the United States. Thirty percent of all pregnancies now end on a tabletop in an abortionist’s clinic.”

This is the testimony of a man from them. This is only the tip of the iceberg of vices in the West! So the West, with its corrupt and evil culture, wants to drag Muslims, especially youth and children, into the abyss of destruction!

Therefore, the politically aware, politicians, thinkers, intellectuals, ‘ulema, bloggers and parents must sound the alarm about this danger. Allah (swt) has warned us that they will never be pleased with us until we follow their religion; therefore, no good can be expected from them and their culture, and goodness and glory are in Islam only.

As the Khaleefah Umar (ra) said,

“We were the most humiliated of a nation, so Allah (swt) honored us with Islam. Whatever we sought glory in other than Islam, Allah (swt) would humiliate us.”

Seeking honor in other than Islam only brings humiliation and we are witnessing this in reality. The only way to change this bitter reality is to resume the Islamic way of life. This will not be achieved except under the rule of the Khilafah Rashidah (rightly-guided Caliphate), which will be established soon, inshaa Allah.