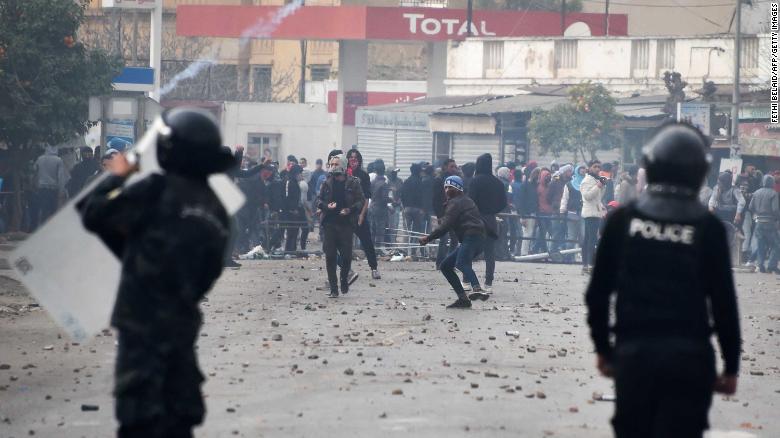 Despite general concerns about the physical and mental health of US President Donald Trump, the White House claims after medical review that Trump is in ‘excellent health’. According to The Guardian:

The White House physician pronounced Donald Trump to be in “excellent health” after Trump had his first medical exam as US president on Friday, capping off a week in which his mental fitness for the job has come under intense scrutiny…

“The president is in excellent health and I look forward to briefing some of the details on Tuesday,” Jackson said.

The exam comes as the White House faces a barrage of questions over the president’s contradictory messages on key policies and an incident last month where he slurred some words while giving a speech.

The White House determines what data will be released from the exam. Trump is not compelled to release any information, and there is no template for the presidential exam.

Every age has its false beliefs, and one of the leading false beliefs of our age is the idea of democracy. The democratic ruling system is simply a device for elite vested interests to maintain control over government, in the name of the general population. It is completely fanciful to imagine that ordinary people in Western countries actually determine government policies. Governments are run in accordance with the interests of the wealthy and the powerful, and the job of any head of government is to mediate between these different interests, portraying the resulting policies as popular demands. Trump’s value to the American establishment is exactly that, the ability to present elite interests as if they were demands of the ordinary people, as can be seen for example from his recent elitist tax legislation. Weak physical or mental health has not been an obstacle in carrying out this function.

In Islam, the Khalifah is himself the actual ruler of the state, and must be of potent physical and, particularly, mental health in order that he is able to impose his will and not be influenced by special interests. The condition of the Khalifah’s health is a legal matter that requires ongoing review by the Qadhi Madhalim, the judge of acts of injustice, who is specially empowered to review matters of ruling and governance.

More than 770 people have been arrested in Tunisia during nearly a week of protests against a government plan to raise taxes and prices of basic goods, according to the UN.

Rupert Colville, a spokesman for the UN human rights office, called for calm and restraint on Friday, and urged Tunisia’s government to ensure freedom of peaceful assembly.

“We’re concerned about the high number of arrests, some 778 people we understand have now been arrested since Monday, and around a third of those arrested were between the ages of 15 and 20 so very young,” Colville told reporters in Geneva.

These recent events in Tunisia are just one more example showing that the entire Muslim Ummah is indeed one body, and the convulsions within it affect the body as a whole. The suffering in Tunisia is not unique to it but is common to all Muslims because they are all suffering from a common complaint, which is the oppression of the non-Islamic systems that have been enforced upon us by the Western disbelieving imperialists led by Britain at that time and now safeguarded by the Western disbelieving imperialists led by America. It is not possible that the revolutionary activities in countries such as Syria, Libya and Yemen should remain restricted to those places and should not incite Muslims across the entire world.

With Allah’s permission the world will soon these uncoordinated convolutions translate into a single movement calling for the overthrow of not only the agent regimes imposed upon us but also the non-Islamic systems and their replacement by a single state spanning all Muslim lands, implementing Islam and carrying its message to the entire world.

According to Sputnik News:

India’s Ministry of External Affairs (MEA) stated that the country would be exploring new avenues of cooperation with Israel in the defense sector during the upcoming visit of Israeli Prime Minister Benjamin Netanyahu. The Israeli Prime Minister will be meeting his Indian counterpart, Narendra Modi, on January 15.

“India has long-lasting and wide-ranging defense cooperation with Israel. This covers defense equipment, defense industry and technology cooperations which are developing very well. So both the countries will actively explore new areas of cooperation,” Bala Bhaskar, Joint Secretary, MEA told the media in New Delhi. Israel is India’s third largest defense partner after Russia and the US. Israeli ambassador to India Daniel Carmon has termed it a historic visit, which will strengthen the growing partnership between the two countries.

The two states share much in common. Both are established on Muslim land and both are committed to ruling by, and promoting, religions other than Islam. The Jewish state perpetrates a form of religious apartheid, which it seems Modi’s BJP is taking as a model for an explicitly Hindu state.

Only Islam was successful in making it possible for peoples of all religions to live together in peaceful harmony in a single state, no doubt because of the great respect Islam accords to all religions and committing the power of the state to this objective. Allah (swt) says in the Qur’an:

“And were it not that Allah checks the people, some by means of others, there would have been demolished monasteries, churches, synagogues, and mosques in which the name of Allah is much mentioned. And Allah will surely support those who support Him. Indeed, Allah is Powerful and Exalted in Might.”

The secularist project also claims to accommodate multiple religions but in fact continually fails in this simply because its real intent is to undermine, weaken and reject all religious belief and so Muslims are naturally provoked to arise against this disbelieving Western creed. It is only this threat from Islam that forces the secular project in Palestine and India to mask itself with the religions of Judaism and Hinduism, even though the leaders of these countries have no loyalty for these or any religion. With Allah’s permission the time is near that Muslims will resume charge of all their lands and return peace and justice to the entire world and reinstate noble values to peoples of all religions.

By 2040, Islam could be the Second-Largest Religion in the US

The Muslim population is growing, and in the next two decades Muslims could become the second-largest religious group in the United States, according to a Pew Research study. However, that’s not the whole story. The Pew Research Center combined studies they conducted in 2007, 2011 and 2017 with yearly data from the US Census (which does not track religious affiliation) to put together a portrait of the future of Muslims in America.  According to their data, the Muslim population is growing at an accelerated rate, and will more than double from an estimated 3.45 million in 2017 to an estimated 8.1 million in 2050. In the meantime, Muslims are expected to surpass Jews as the second-largest religious group.  According to the Pew Research Center, the number of Muslims in the United States is expected to more than double between 2017 and 2050. Why? One easy answer is immigration — Pew’s research showed a record number of Muslims immigrated to the US in 2016. In fact, according to Pew, three-quarters of Muslims currently in the US are immigrants or children of immigrants. There is another factor as well. On average, according to Pew, the Muslim population is younger than other religious groups, which means they have a higher fertility rate. However, even as the Muslim population in America is set to double in the next few decades, they will still account for a tiny fraction of the overall US population, and shifts in other groups will also have a big impact on the country’s makeup. For instance, in 2020, the projected Christian population will be 252,970,000 — almost 70 times the projected Muslim population. In 2050, the projected Christian population will be 261,960,000 — a massive growth in numbers, but because of the growth of other religious groups, a declining percentage of the population. Even then, even as the second largest religious group, Muslims will still only account for 2.1% of the population. [Source: CNN]

No matter how hard the US tries to suppress Islam globally in the end it will be a source of regret for America’s elite. Allah says:

The United States ambassador to the Netherlands on Wednesday refused to answer Dutch reporters’ questions about controversial comments he made in 2015, including an assertion that the “Islamic movement… [had] put Europe into chaos.” Pete Hoekstra, whom President Donald Trump nominated last summer, made headlines in December when a Dutch reporter asked him about comments he made at a 2015 conference. Hoekstra denied making them—despite a video of the conference that showed otherwise. “The Islamic movement has now gotten to a point where they have put Europe into chaos. Chaos in the Netherlands, there are cars being burned, there are politicians that are being burned. And yes, there are no-go zones in the Netherlands,” Hoekstra says in the clip. At a Wednesday press conference marking Hoekstra’s first official day as ambassador, reporters “repeatedly” asked Hoekstra to address those comments, as well as the December incident, the Associated Press reported. “This is the Netherlands, you have to answer questions,” one reporter maintained, according to the outlet. The ambassador, however, declined to do so, the AP reported. [Source: Newsweek].

Just like the liar Trump, his administration is also full of liars who routinely accuse Islam and Muslims of falsehood. The only positive aspect about the Trump’s administration is its open declaration on racism, bigotry, Islamophobia and discrimination against people of all colour both at home and round the world.

Pakistan’s army chief has told a top US general that his nation feels “betrayed” by US criticism that it is not doing enough to fight terrorism, which has prompted Washington to suspend military aid for Islamabad. The Pakistani military in a statement on January 12 said that General Qamar Javed Bajwa told US Central Command chief General Joseph Votel in a phone conversaton this week that the “entire Pakistani nation felt betrayed over US recent statements despite decades of cooperation.” Bajwa told Votel that Pakistan will not seek to restore US military aid, but it does “expect honorable recognition of our contributions, sacrifices and unwavering resolve in the fight against terrorism,” the statement said. US President Donald Trump on January 1 accused Pakistan of “lies and deceit” and said the United States would suspend around $2 billion a year in military aid until Islamabad moves decisively against Afghan Taliban and Haqqani Network militants who he said have found safe haven within Pakistan’s borders. During their conversation, Votel sought to reassure Bajwa, Pakistan’s army statement said, saying the United States is not contemplating any “unilateral action inside Pakistan” to go after the militants. “The general said that US values Pakistan’s role [in the] war on terror and expects that on-going turbulence [will be] a temporary phase,” the statement said. [Source: Radio Liberty]

Pakistani army chiefs are supposed to identify the enemy and deal with the enemy in an appropriate fashion. However, from Musharraf to Bajwa the Chief of Army Staff have committed blunder after blunder in trying to appease America knowing full well that this would lead to the destruction of the country. If Bajwa possesses any sincerity, he should immediately stop all forms of cooperation with the US starting with the closure of the embassy and the expulsion of all American personnel from Pakistan.