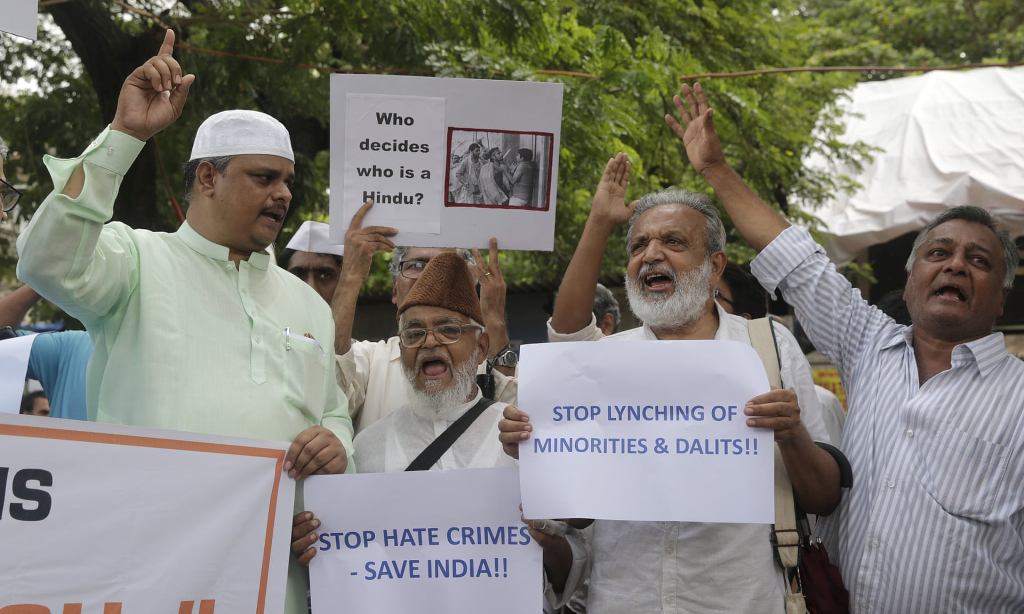 A young Indian Muslim man has died days after reportedly being beaten by a crowd who forced him to perform Hindu chants. A recent US government report on international religious freedom found that mob attacks against Muslims in India occurred throughout 2018. (Source: Independent)

The condition of Muslims of India is no different from that of others around the world, where their faith has become a looming danger for them and it is not about carrying out the call or preaching of Islam that threatens anti-Muslim extremists but the simple everyday lives in which their names or beards can become the cause of torture and death. Muslims, who ruled over the Indian Subcontinent for more than 400 years until the British invasion and later were divided in the name of the two-nation theory, have become the prisoners of division. Still the Muslim population of India is nearly 172 million, which makes it the second largest Muslim population in the world after Indonesia; is a target of mob attacks. Anti-Muslim hate crimes are encouraged and even rewarded by the people of power. According to a report released by Fact Checker, 76 percent of victims of hate crime in India in the past 10 years have been Muslims, and 90 percent of these attacks have occurred since Prime Minister Narendra Modi was first voted into power since 2014.

India, which claims to be the world’s largest democracy, fails to protect its own people. This negates not just the Indian Government’s claim of being a ‘sovereign, secular and democratic republic’ but also shows that how dangerously this hatred has been spread in people who fearlessly and mercilessly hunt for their helpless Muslim Victims. Believing in Nation States, the protection of Indian Muslims is the responsibility of the Indian Government, which it is failing to provide, and we find UN and other international monitoring systems playing dead. Meanwhile, the Prime Minister of Pakistan, Imran Khan, in an attempt to prove himself a peace-loving soul, has recently written his third letter to Modi, offering him cooperation in dealing with terrorism and to hold a dialogue to resolve Kashmir dispute. Not a word was spoken for the victimization of Indian and Kashmiri Muslims.

Muslim lives will continue to be compromised until the Muslim leadership understands that responsibilities of a Muslim ruler for the safety of Muslims are not restricted by boundaries drawn. Allah’s world is for His rule and when someone takes responsibility for His people, then he should fear Allah as betraying the people is a betrayal of the Almighty. The Subcontinent was opened to Islam in response to the call of a Muslim woman, and now this call is coming from every nook and corner, but we don’t see our rulers sending any Muhammad Bin Qasim to the rescue. The Muslims of India and Pakistan are in desperate need of the protection named Khilafah. A strong Khalifah will not write letters begging for attention but a simple warning note for a tiny transgression will shake them and butchers like Modi will be dealt as they deserve.

In the Targhib wa’ l-Tarhib of Imam al-Mundhiri, 3/276 it has the following hadith from `Abd Allah ibn `Amr ibn al-`As (Allah be well pleased with him) that he said: رأيتُ رسولَ الله صَلَّى اللهُ عَلَيْهِ وَسَلَّمَ يطوفُ بالكَعْبَةِ ويقول: «ما أطْيَبَكِ، وما أطْيَبَ ريحَك؟ ما أعْظَمكِ وما أعْظَمَ حُرْمَتكَ. والذي نفسُ محمَّدٍ بيده لحرمَةُ المؤمِنِ عند الله أعْظَمُ حرمةً منكِ؛ مالُه ودَمُهُ» “I saw the Messenger of Allah ﷺ performing tawaf around the Holy Ka`ba saying to it: ‘how pure and good you are! how pure and good your fragrance is! how great and exalted you are! and how great and exalted your sanctity is! But by Him in Whose hand is Muhammad’s soul, the sanctity of a believer’s blood and property in the sight of Allah is greater than your sanctity!’”