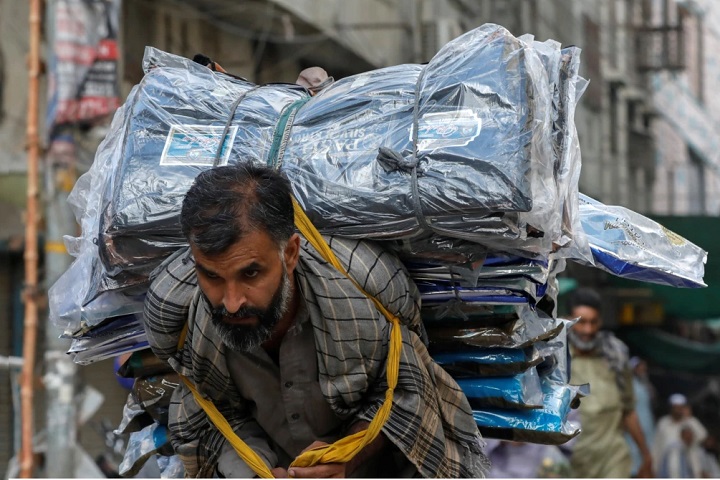 On 28 July 2021, the economic advisory wing of the finance ministry declared in its Monthly Economic Outlook (MEO) for July that, “In the transition towards a higher potential growth level, pressure can be built on external accounts, calling for close monitoring to ensure that the new growth strategy is sustainable.” As for the IMF economic hit-man and American economic viceroy, the Governor of the State Bank of Pakistan, Raza Baqir, he stated that, “There were good reasons to expect that, unlike several previous growth upturns in Pakistan, the current economic recovery would be accompanied by external stability.” For the past few months, the government has been touting the increase in GDP as its greatest achievement. It claims that the difficult days are now over, whilst the coming days will bring economic prosperity. However, the Muslims of Pakistan have gone through a vicious cycle of GDP growth many times previously. As previously, the increase in GDP is already coinciding with increasing trade and current account deficits. So in a while, Pakistan will be where it was in 2018, facing large current account and trade deficits in a balance of payments crisis, with the government insisting that it has no choice but to go to the IMF.

Even if we do not review the entire 74 years of Pakistan, restricting ourselves to the last 21 years alone, it is clear that each outgoing government leaves a huge current account deficit for the incoming government. The main reason behind this phenomenon is the continuous increase in expensive, high value imports. When the government then goes to the IMF, the problems only worsen and a cycle is set up. The IMF calls for an increase in electricity and gas prices, increased tax rates, imposition of new taxes and trade policies which create dependence on imports. When the situation reaches the point where Pakistan is close to defaulting on external payments, a loan is sought from the IMF. Whilst the IMF loan reduces or eliminates Pakistan’s balance of payments deficit, IMF policies never allow Pakistan to meet its needs through domestic production and import substitution. Thus, continuously deprived of a substantial heavy industrial backbone by which to stand on its own feet, Pakistan plunges deeper into debt in a vicious cycle of deficit based growth. Today oil, gas, chemicals, machinery and high tech equipment are all imported. Even wheat, sugar, cotton, edible oil, pulses are imported, despite Pakistan being amongst the top ten agricultural countries in the world. Thus, it is no surprise that the current GDP growth is not sustainable.

Unless the Khilafah ends slavery to the IMF, Pakistan will never be able to achieve the goal of sustainable and stable economic development. In the Islamic economic system, electricity, gas, and oil are publicly properties that are supervised by the state. So energy will be available at reasonable prices, as profits and commissions from generators, refineries, marketing companies and distributors will be taken out of the equation. The Islamic economic system does not have any income tax, general sales tax, excise tax or any such non-Shariah tax. In this way the cost of production is drastically reduced, whilst the establishment of local heavy industrial units is eminently viable. This is how under the Khilafah, Pakistan can achieve the goal of real, sustainable and stable development.So for the pleasure of Allah (swt), let the Muslims strive for the re-establishment of the Khilafah Rashidah (Rightly Guided Caliphate) on the Method of the Prophethood. It is in the Khilafah alone that rulers will no longer make economic systems, policies and laws according to their whims and desires, as the Khilafah restricts implementation to laws derived from the Qur’an and Sunnah.