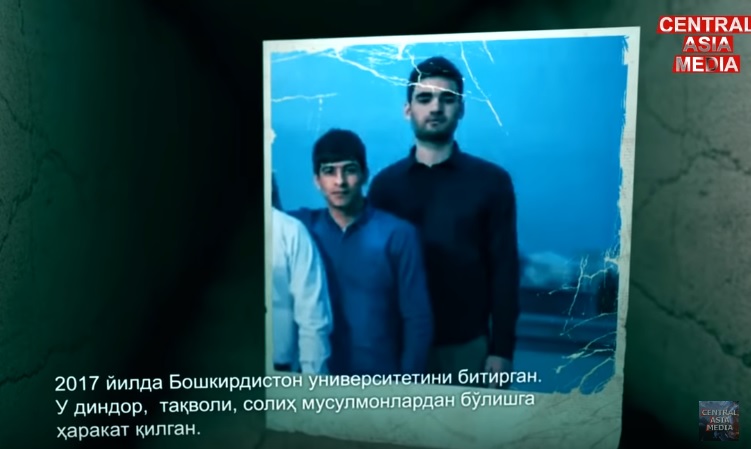 He graduated in 2017 from Bashkortostan University. He aspired to be a committed, pious and righteous Muslim. He had a burning desire to introduce the true Islam to people, this is what he called for; this is why he gained people’s love.

Annayev Bekentesh’s wedding day was set for 24-25/9/2018, but he disappeared from his work place on 17/8/2018, and his body was found on 18/8/2018. There were many wounds found on his head and his arm was broken. There were signs of torture on his body and there were signs on his hands of being tied up! This clearly shows that he was abducted by the intelligence services, and here is the evidence for this:

In 2016, Kazakov Wiba and Ata Kildi Noor Murad returned to Turkmenistan. They were also graduates of Bashkortostan University, where Annayev studied. Kazakov Wiba worked as a lecturer in the Institute of Agriculture, and Ata Kildi worked in the Council of the authority. These young men too wanted to teach people the true Islam and call them to it.

In the beginning of February 2017, they arrested Kazakov Wiba from his work place. A week later, they arrested Ata Kildi Noor Murad from their work places too. They sentence each with harsh sentences and one-year imprisonment,

This means that the regime in Turkmenistan also practices oppression against the Muslims! This is why fingers point to the intelligence services for killing Annayev Bekentesh Khaidirovitch. Many people took part in his funeral and burial, and many people expressed their rage and anger for the brutal killing of this young man.

This is one of the incidents that came to our knowledge, but there are many that we have no knowledge of! The regime in Turkmenistan -as you can see- is relentlessly fighting against the Muslims with many cruel styles.

We ask Allah (swt) to grant our Brother Annayev the Jannah and raise him with the Prophets, Truthful, Martyrs, and righteous and they are the best of companions! And we ask Allah (swt) to protect our other brothers and oppressed sisters from the oppressors soon!

The Khilafah state upon the method of the Prophethood (Caliphate) will be established soon by the permission of Allah, and it will punish harshly the oppressors and murderers for their crimes!] End.

It is known that Central Asia is an area of strategic importance, as this region links Europe to the Middle East, East and South Asia. Central Asia covers 3 million and 994,400 square kilometers. This region is rich in energy sources, oil, gas, gold, coal and other resources. For example, according to information released, the volume of oil reserves in the Central Asian countries is between 15-31 billion barrels, and the volume of gas reserves 230-360 trillion cubic meters. This accounts for 7.2% of the oil resources and 7% of the world’s gas resources! According to global statistics, the volume of gas consumption in 2003 was 93 billion cubic meters,

It is possible that this size can increase in 2030 to 182 billion cubic meters! In this region, cheap labour can be found and is quite abundant. According to information for the year 2017, the population of Central Asia was 69,241,030. For example, a staff member of the Bashkortostan University, Morzagaliev, wrote in his article: Now only 2.3 million immigrants from Uzbekistan are working in Russia! And from Tajikistan, 1.1 million immigrants work in Russia. This region, with its enormous wealth, is what the Kafir colonialists from Russia, America and China salivate and crave for.

The Central Asian Republics, including Turkmenistan, also suffer from an economic and financial crisis. For example: according to the correspondent of “Freedom”: Now in Turkmenistan there is a shortage of food such as flour, sugar and oil. According to Professor Steven Khanki, such a crisis is caused by massive inflation. According to estimates, inflation in Turkmenistan is 294%! This is why people complaints are growing. The agent regimes practice a policy of persecution to keep people in a state of fear!

But the dawn is near! It is time for the Ummah of Islam to rise up to bring people out of darkness to the light with the permission of their Lord, to the path of Al-Aziz Al-Hamid! The Khilafah Rashida (Caliphate) on the method of Prophethood is coming, Allah willing! Tomorrow for those yearning for it, is near.

“And that day the believers will rejoice In the victory of Allah. He gives victory to whom He wills, and He is the Exalted in Might, the Merciful”