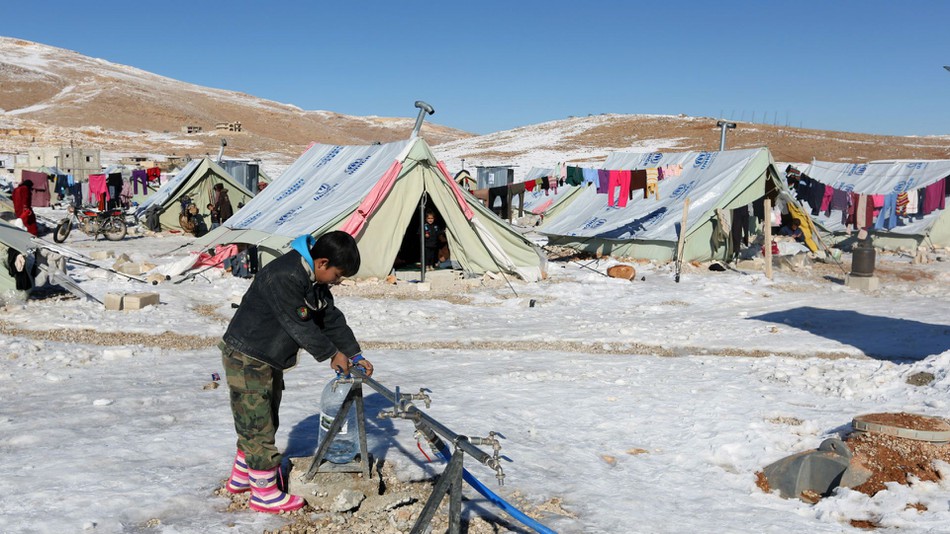 A video clip from inside the camps shared by activists on social media websites, showed a refugee from Syria inside his tent shivering from the cold weather. He appealed to the relevant authorities to provide them with fuel oil.

Refugees in various inhumane camps have appealed to relief organizations for support and have called for emergency assistance from the relevant authorities. They said that only a miniscule amount of aid has reached camp residents, which is not enough for 10 per cent of the total number of refugees in the camps, at a time when there is severe shortage of fuel and means for keeping warm in such harsh weather conditions that have hit most of Ash-Sham region.

For example, more than 80,000 refugees from Syria, in the Lebanese town of Arsal which is about 1300 m above sea level, complain from the absence of the basic elements of decent living, such as ensuring proper sewage networks and the construction of paved roads. Each year the harsh weather comes with disastrous impact on the children and women, even on adults and the young in these haphazard camps and even the structured ones.

It is natural in these months of each year to see snow on the mountains and heavy rain and successive storms by different names, but it is not natural for the tragedies and humanitarian disasters to recur throughout these years due to the absence of minimum heating requirements such as blankets and fuel oil, in addition to the lack of some of the main foodstuff like bread and baby formula.

It is also natural for regions to experience plummeting temperatures during these months of the year, but it is not normal to see that children, especially infants, continue to experience the severe cold conditions.

What is not normal and the impossible happens. We saw, heard and experienced it with our people in the refugee camps throughout these difficult years, where the real tragedies take place, even in the absence of the snowstorms, which stripped the last cover off the traitors, the neglectful rulers, on the one hand and the organizations claiming to work for humanity on the other.

The establishment of such refugee camps and these miserable living conditions unsuitable even for animals, may Allah protect you from it, is the result of the classification of human beings on the basis of the abhorrent citizenship (nationality) law that led to this racial discrimination. The one with the right to live a decent life is the one who holds the nationality, if it is available in his country, while restricting the so-called alien with systems and laws that limit the possibility of living a good and stable life. And what if these foreigners had an added attribute as refugees… especially in such capitalist systems of interest that holds no value to humans!!! They are forced to live in the most difficult places and the most severe conditions such as the cold mountains and the very hot deserts and in valleys where there are floods. As if the cruelty of displacement and asylum is not enough, they add to them the cruelty of life without dignity.

Know Muslims, that this is the situation of refugees: hunger and humiliation in the Muslim countries and they are let down by those who describe themselves as responsible for their affairs, who are sleeping in the arms of the West and negotiate (with them) after they sold the blood of the martyrs with the cheapest prices and covenants. The plight of the refugees with their miserable conditions and cruel suffering is no longer at the top of the politicized media articles as it was in the early years of the Syrian crisis. Their file, like other humanitarian files related to the ongoing war, is absent and is replaced by political nonsense and disputes over interests, as if they are in a public auction, to instill the American political solution in the region that revamps the image of Criminal Bashar as the innocent “baby lamb”!

And know also that in our unity is the glory and empowerment, and in our division is humiliation and weakness. Let us work for our unity, and seek to live by the orders of Islam and the Deen and restore our Khilafah Rashida (rightly guided Caliphate) again to fulfill the promise of the Lord of the Worlds.