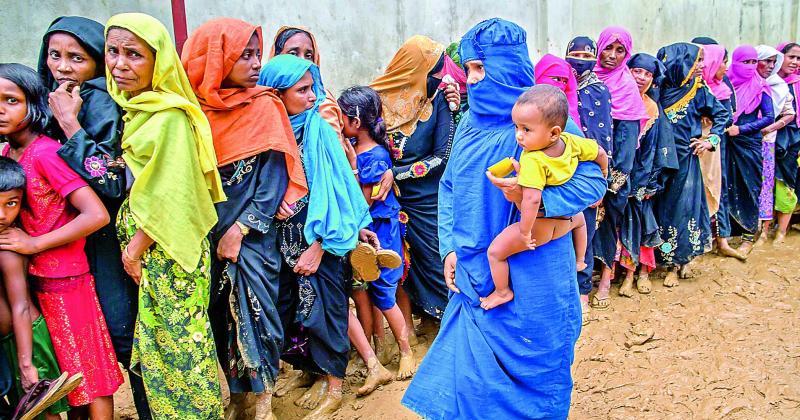 On Thursday 16th November, Human Rights Watch (HRW) published a report that stated that the Myanmar military committed systematic and “widespread rape” against Rohingya Muslim women and girls as part of its campaign of ethnic cleansing in the country’s Rakhine State. The report, “‘All of My Body Was Pain’: Sexual Violence Against Rohingya Women and Girls in Burma”, was based on interviews with 17 representatives of humanitarian organisations providing health services in the Bangladesh Rohingya refugee camps, as well as interviews with 52 Rohingya refugee women and girls, 29 of whom said that they had been raped, with all but one of the rapes being gang rapes. In one case study cited in the report, a 15 year old Rohingya girl described how Myanmar soldiers stripped her naked and dragged her from her home to a nearby tree where about 10 men raped her. Many of those interviewed also described Buddhist soldiers bashing the heads of their young children against trees, throwing children and elderly parents into burning houses and shooting their husbands. Skye Wheeler, Women’s Rights Emergencies Researcher at HRW and author of the report, stated, “Rape has been a prominent and devastating feature of the Burmese military’s campaign of ethnic cleansing against the Rohingya.”

Other Rohingya women and girls in Bangladesh’s refugee camps have also recounted stories of torture, mutilations, being stripped and humiliated, having their breasts slashed with knives, being raped in front of their children, husbands and fathers, and having sharp wooden sticks or firearms thrust through their private parts, as well as having to endure the harrowing, treacherous journey to Bangladesh to escape death while still bleeding and writhing in agony from their rapes. There are also accounts of Rohingya women and girls being raped and then locked inside houses that were torched. Furthermore, in October, the charity, Médecins Frontiéres, reported that more than half of the girls in the Rohingya refugee camp in Cox’s Bazar, Bangladesh that it had treated after sexual assaults and rape in Myanmar were under 18, and some were under 10.

Every government in this world, every world leader, and the United Nations, sees these desperate images of human suffering, reads the reports of the most gruesome atrocities and crimes against humanity, and hears the heart-breaking stories from the victims of genocide and yet they stand still, choosing to do nothing to end this tragedy that has befallen our dear Rohingya Muslim brothers and sisters. When the UN’s Security Council met in November, their punitive response to these horrors was to merely issue empty statements as usual, requesting the Burmese government that has no moral conscience to, “ensure no further excessive use of military force in Rakhine State.” When leaders at the ASEAN summit met this month, they were effectively silent on the Rohingya crisis. And when Rex Tillerson, US Secretary of State, visited Myanmar last week, he stopped short of even calling the situation in the country a case of ethnic cleansing while also advising against any broad-based sanctions against the regime or military. But what is even more sickening than all this, is the deafening silence of the rulers and regimes of the Muslim world to this bloodbath and heinous crimes against our Ummah – rulers and regimes who have washed their hands of any responsibility to protect the lives of the believers.

Today, we live in a capitalism dominated world that ignores the great value of human life and dignity; a world that does not move to defend the oppressed unless there is political and economic gain to be had. So why do some Muslims still turn to the UN or Western governments or the rulers of the Muslim world with false hopes that they will protect the believers when their moral duplicity and lack of any genuine concern for the Muslims is crystal clear? Surely, there can be no doubt that ONLY the truly Islamic leadership of the Khilafah based upon the method of the Prophethood will defend the dignity and blood of this Ummah for it has a sincere concern for the lives of the believers, and is obliged by Allah (swt) to protect them from any harm. This was exemplified by the 9th century Khalifah, Al-Mu’tassim Billah who mobilised a huge army, tens of thousands strong, to rescue a single Muslim woman who was abused and captured by a Roman soldier. Today, in the absence of the Khilafah (Caliphate), tens of thousands of our Muslim sisters are violated across the world yet no state heeds their cries!