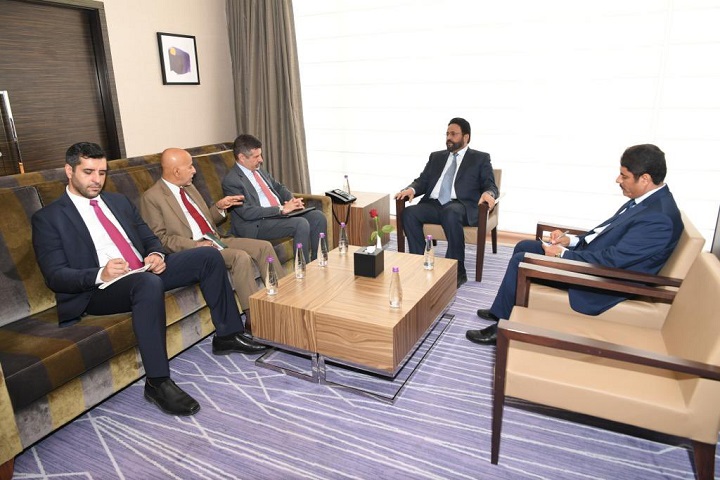 The Presidential Council of Aden Receives the Americans under Compulsion

Al-Thawra Daily Newspaper, issued in Sana’a, reported the news of the arrival of the American ambassador to Yemen, Stephen Fagin, from Jeddah to Hadramout, and his meeting with the local officials there. So, were the ballistic missiles of the Houthis unable to reach the Hadramout province inside Yemen, hitting a handful of American soldiers, despite having already reached many places in the kingdoms of Al Saud and Al Zayed, by passing the borders of Sykes and Picot, and the Houthis’ voices chanted morning and evening, summer and winter, “Death to America”?!

The Houthis must realize that America and its ambassadors, from Krajesky to Firestein, and its current ambassador, Stephen Fagin, are not trustees, but are actually combatants. Its ambassadors and its international tools are clearly visible and it is not hidden from anyone. It’s “something fishy”! If the slogan “Death to America” was serious, the rockets and marches would not have left their eyes staring or their eyelids blinking. Eight years have passed since the war, and today we are witnessing a truce, and not a single American blood was shed!

The Houthis often say that al-Qaeda is the banner behind which the US military forces are hiding inside Yemen. So what are they waiting for?! The American forces inside Yemen, specifically at the headquarters of the coastal defense brigade “Qarat al-Persa” in Hadramout, and in Ma’ashiq Aden, are within range of their missiles and drones.

How do the Houthis measure the matter for America? Let us suppose that the slogan is not death to America. Aren’t the Americans occupying forces in Yemen, and over the years of the war you have declared that? Why don’t the army and people’s committees target them with fighting and confrontation, even from a distance, with ballistic missiles and drones?! A question we put to the followers of the Houthis in the hope that we will receive a politically conscious answer from them. Or are the Houthis continuing to help the Americans in occupying southern Yemen, following Iran’s footsteps in its cooperation with America in occupying Afghanistan and Iraq?!

We do not say this speech and exonerate Al-Alimi and his council are the creation of the West. Rather, both are in the race for evil alike. The Presidential Council and all components are equal in southern, eastern and central Yemen. They went too far in injustice and oppression, as those in the north of Yemen. So, O followers, you must reflect on the actions of these leaders so that the cover will be revealed to you, and measure their actions according to your creed. Then you must go to where Allah commands you, so the justifications will not be useful in the hands of Allah Almighty on the Day of Resurrection.

Faith and disbelief do not meet, and true faith is what will drive America out of the Islamic lands, beyond the Atlantic Ocean, under the second rightly-guided Khilafah (Caliphate) state upon the method of Prophethood, Allah willing.