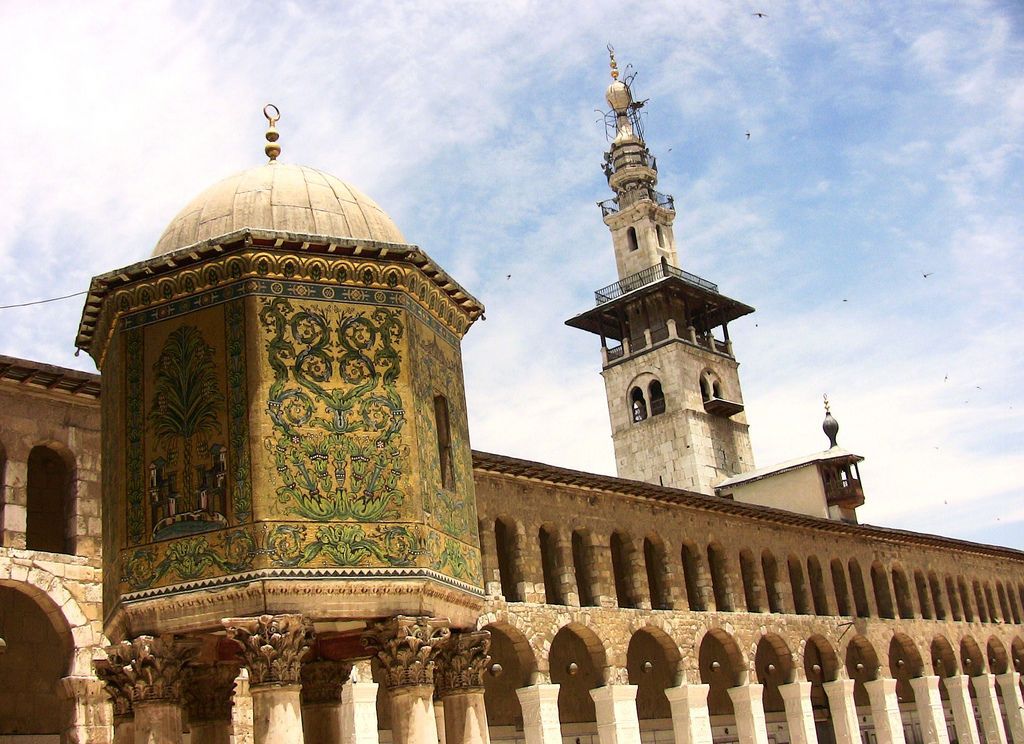 When the Prophet ﷺ was calling for the good (i.e. Islam), he ﷺ was simultaneously refuting the prevailing system of ignorance (Jahiliyah) and exposing its corruption. So with his call to worship Allah alone (Tawheed) and to leave the worship of idols, he also attacked the corrupt system they lived in, condemned their cheap lives, and deplored their unjust means of living. With the saying of his Lord قُلْ يَا أَيُّهَا الْكَافِرُونَ * لَا أَعْبُدُ مَا تَعْبُدُونَ * وَلَا أَنْتُمْ عَابِدُونَ مَا أَعْبُدُ “Say, “O disbelievers, * I do not worship what you worship * Nor are you worshippers of what I worship” [Al-Kafiroon: 1-3].

He ﷺ strongly attacked usury (riba) and its origins which they lived on, and conveyed from his Lord وَمَا آتَيْتُم مِّن رِّباً لِّيَرْبُوَ فِي أَمْوَالِ النَّاسِ فَلَا يَرْبُو عِندَ اللَّهِ “And whatever you give for interest to increase within the wealth of people will not increase with Allah” [Ar-Rum: 39].

And he ﷺ warned those who cheat in the balance and measures, Allah (swt) says: وَيْلٌ لِّلْمُطَفِّفِينَ * الَّذِينَ إِذَا اكْتَالُوا عَلَى النَّاسِ يَسْتَوْفُونَ * وَإِذَا كَالُوهُمْ أَو وَّزَنُوهُمْ يُخْسِرُونَ “Woe to those who give less [than due], * Who, when they take a measure from people, take in full.* But if they give by measure or by weight to them, they cause loss” [Al-Mutaffifin: 1-3].

Islam is Allah’s Deen, which He revealed to the people; it is a general ideology for all life’s affairs; it addresses human problems and organizes all of life’s affairs in full, economically, politically, socially and educationally. Allah (swt) says: وَنَزَّلْنَا عَلَيْكَ الْكِتَابَ تِبْيَاناً لِّكُلِّ شَيْءٍ “And we have sent down to you the Book as clarification for all things” [Al-Nahl: 89]

The Prophet ﷺ said: «تَرَكْتُكُمْ عَلَى المَحجّةُ الْبَيْضَاءِ، لَيْلُهَا كَنَهَارِهَا لا يَزِيغُ عَنْهَا إِلاَّ هَالِكٌ». “I am leaving you upon a (path of) brightness whose night is like its day. No one will deviate from it after I am gone but one who is doomed.”

Therefore, the carrying of the economic system in Islam, promoting it and calling for it, and all its resulting policies is carrying a part of Islam that is no less important and valued than other aspects. Allah (swt) says: أَفَتُؤْمِنُونَ بِبَعْضِ الْكِتَابِ وَتَكْفُرُونَ بِبَعْضٍ فَمَا جَزَاءُ مَن يَفْعَلُ ذَٰلِكَ مِنكُمْ إِلَّا خِزْيٌ فِي الْحَيَاةِ الدُّنْيَا وَيَوْمَ الْقِيَامَةِ يُرَدُّونَ إِلَىٰ أَشَدِّ الْعَذَابِ وَمَا اللَّهُ بِغَافِلٍ عَمَّا تَعْمَلُونَ “So do you believe in part of the Scripture and disbelieve in part? Then what is the recompense for those who do that among you except disgrace in worldly life; and on the Day of Resurrection they will be sent back to the severest of punishment. And Allah is not unaware of what you do” [Al-Baqara: 85].

Therefore, the economic system in Islam should be carried and advocated as one of the parts of the Deen which is a trust in our necks and as the only one capable of providing a just, crisis-free and secure economic life, and the care it includes prevents from the start falling into crisis. It is not a man-made system as is the case with other man-made systems (communism and capitalism). It is from Allah, the creator of all human beings and creator of everything. This article will not allow, in limited lines, to mention what is stated in the 300 page book, The Economic System in Islam by the eminent scholar Taqiuddin an-Nabhani in which he detailed the Islamic economic policy and how this system ensured a decent life for all people, Muslim and non-Muslim, for nearly 13 centuries without crises and problems, but the contrary. I will just mention this story, as one example, and not the only one, of how there was surplus of money, which has increased tremendously in the era of the Caliph Umar bin Abdul Aziz, may Allah have mercy on him. He ordered the governor of Iraq Abdul Hamid bin Abdul Rahman, “to give people their rights,” Abdul Hamid wrote back: I have taken out the rights to the people, and there is money remaining in Bait ul Mal”.

He ordered him to pay the debt of those indebted from Bait ul Mal. He said: “pay the debt of those in debt but not those in debt out of extravagance or wasting”.  Abdul Rahman wrote back: “I have paid their debts, and still there is surplus money in Bait ul Mal.” The Caliph ordered him to help the poor Muslim youth to get married, he said: “pay for every unmarried youth who wishes to get married, but has no money.” Abdul Rahman wrote to him: “I have helped all those whom I found who wanted to get married, yet there is still money in Bait ul Mal.” Omar ordered that the agricultural credit process to be initiated from Bait ul Mal, as a bank of the state, so they provide the money to the farmers if they are hit by crisis or hardship. He said to the governor: “find out who has to pay the tax on his land, give him a loan to improve his land; we do not want them (taxes) for a year or two.” To conclude, the Islamic economic system is not only the alternative, but it is the true system, because its laws are revealed by the Lord of the Worlds, Creator of all human beings, who knows what works for his creation. أَلَا يَعْلَمُ مَنْ خَلَقَ وَهُوَ اللَّطِيفُ الْخَبِيرُ “Does He who created not know, while He is the Subtle, the Acquainted?” [Al-Mulk: 14]

Today, after communism failed to provide a secure economic life for the people, it is followed by the failure that envelops the neck of capitalism, which has sunk into the quagmire of successive crises despite the holding of conferences and the efforts of its scientists and economic experts who limited their thinking in two failed systems. Failure is the result of all their solutions, rather the problems increased and engulfed all countries of the world without exception.

Since the domination of the capitalist system, the whole world has been living in the darkness of this system, having failed to create an economic life free from crises that have produced poverty, hunger, unemployment, homelessness and destitution at high and dangerous rates, for several factors, most notably economic globalization. Globalization has dominated the past 20 years and has had a major impact on the ongoing economic crisis. The integration of local economies into the international economy, which is dominated by America because of its political dominance, has extended the economic problems to all countries of the world.

And if the Kuffar are not guided by the truth and do not reason as described by Allah (swt): وَقَالُوا لَوْ كُنَّا نَسْمَعُ أَوْ نَعْقِلُ مَا كُنَّا فِي أَصْحَابِ السَّعِيرِ “And they will say, “If only we had been listening or reasoning, we would not be among the companions of the Blaze.” [Al-Mulk: 10]

Then what is the excuse of the Muslims today, who reject to the Book of Allah and the Sunnah of His Messenger?! Allah (swt) is the One who says: قَدْ جَاءَكُم مِّنَ اللَّهِ نُورٌ وَكِتَابٌ مُّبِينٌ * يَهْدِي بِهِ اللَّهُ مَنِ اتَّبَعَ رِضْوَانَهُ سُبُلَ السَّلَامِ وَيُخْرِجُهُم مِّنَ الظُّلُمَاتِ إِلَى النُّورِ بِإِذْنِهِ وَيَهْدِيهِمْ إِلَىٰ صِرَاطٍ مُّسْتَقِيمٍ “There has come to you from Allah a light and a clear Book * By which Allah guides those who pursue His pleasure to the ways of peace and brings them out from darknesses into the light, by His permission, and guides them to a straight path” [Al-Ma’ida: 15-16].