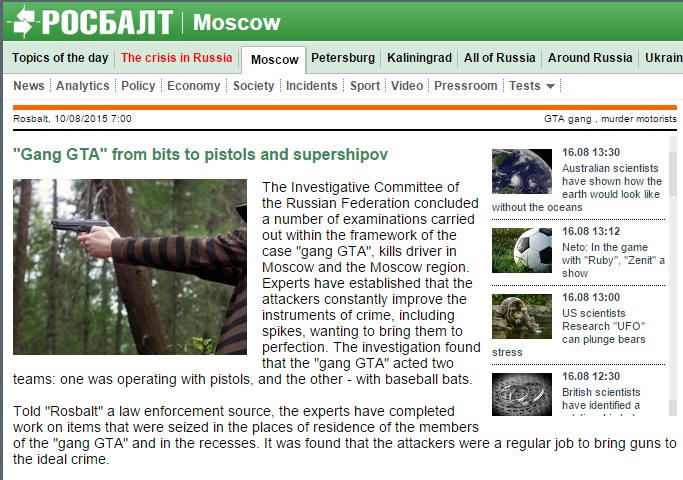 Rosbalt News agency website published an article dated 08/10/2015, titled “Gang (GTA): from stick beatings to guns and iron knobs”, talking about the next version of investigations on the contentious issue that occurred last year. Unfortunately this is not the first time that the site links the incident to a member of Hizb ut Tahrir, as claimed by some “law enforcement sources.”

The one behind the insistence of Rosbalt news agency on distorting the reality of our party is the security agencies which are concerned to falsify the reality of Hizb ut Tahrir’s activity to the reader. And again as usual, they show a fictional person as the gang leader and present him as a member of Hizb ut Tahrir. The name of this person and his family name are anonymous, and will remain mostly unknown; because this person is probably and simply does not exist, simply the security agencies and the media invented him only to distort the image of the Hizb’s members and to present them as if they were criminals.

Since Hizb ut Tahrir is known as a political party, the newspaper had no other means but to accuse a man who is not from Hizb ut Tahrir of his criminal doctrine. Rosbalt never forgot to hint at the connection between the big head in Hizb ut Tahrir and the criminal organization.

Incidentally, Rustam Usmanov, who was mentioned on one occasion of being the mastermind, was killed during his arrest operation; therefore it is easy to weave and fabricate about him untrue stories and rumors, the same is true concerning the imaginary leader.

Although we have, more than once, invited the press and specifically Rosbalt news agency,  to abide by the basic principles of journalistic ethics, but it still continues to publish the security agencies’ lies, as it does not leave any opportunity to discredit Hizb ut Tahrir in people’s eyes but to exploit it, what proves to people the extent of their spite on the Hizb.

Irrefutable facts have shown that the Russian media these days are unable to perform their natural duty objectified in delivering the truth and correct information to the community, and have become a propaganda mouthpiece for the state.