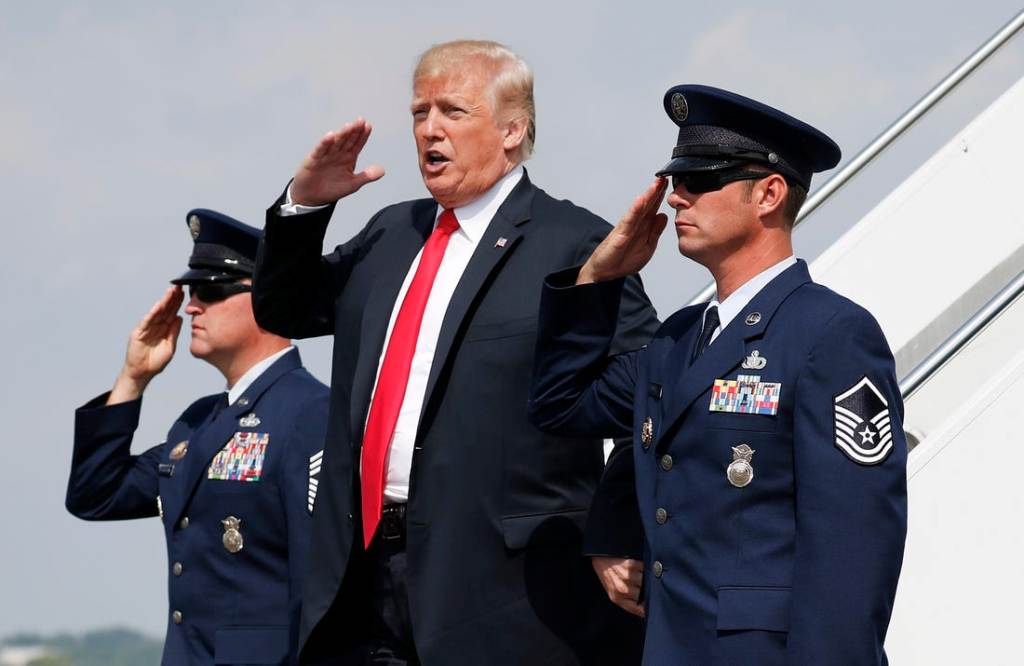 During Obama’s presidency, the American foreign policy lacked a lot of clarity as he withdrew America from the conflicts within the Middle East to support liberal democracy and humanitarian goals. But the Syrian war posed a dilemma for President Obama, which was that neither his idealism nor the US intervention would have helped to solve the Syrian situation, which was due to the country’s damaged reputation of invading Iraq and Afghanistan. The same goes for George W. Bush whose foreign policy focused on the “global war on terror” and to maintain America’s unipolarity. He did this by linking weapons of mass destruction to Saddam Hussein as a pretext to carry out its imperial mission across the region. Bush ignored the so-called International Law and justified America’s actions by utilizing the term “National Security”, which also helped gain domestic support. This is very similar to George Kennan, who also used the same term to justify America’s actions against the Soviets during the Cold War.

According to Clausewitz Strategy, which consists of three elements, politics, public consent and operations, if any of the three components from a strategy are missing, then the strategy is likely to produce ambiguities. The reality is that America’s foreign policy crisis started during the early days of the Cold War, where they used ambiguous policies to justify their actions and to manufacture the consent of the American public.

The containment theory during the Cold War also possessed many obscurities regarding US objectives. The containment policy comes between détente (relaxed) and roll back (aggressive expansion); this was done intentionally to confuse the public and the Soviet Union. The confusion within the containment policy causes the Communists to miscalculate their actions, which the United States used as a pretext to carry out its imperial ambitions. The US justified its actions by creating Soviet propaganda in order to make it look acceptable to the Western world and to the American people. These obscurities within the American policy of containment caused the Korean and the Vietnamese war, where the primary objective was imperialism for the economic wellbeing of the United States.

Ever since the unipolar moment, America has had a tough time justifying its actions across the world since there was no other powerful state, which poses a serious threat to the American superpower. Post-1991 America’s strategy has not been clarified but rather remains ambiguous, where it continues to justify the use of power politics due to the rise of different terrorist groups whose emergence also raises suspicion. America is well aware that the Wilsonian idealism, on which the liberal order is built, can’t represent all people of different cultures, traditions, and beliefs. Thus, the only way for America to gain power is through imperialism, where in some countries it becomes the method to implement ideas of secular liberalism and in others it becomes the objective. But since there isn’t a great power or a proper state posing any threat to the United States hegemony, the justification for their imperial missions under the shadow of idealism seems to be failing.

Now some academics and experts say that power politics has always been more dominant than ideology; however, this is incorrect. In fact, the method of capitalist America and every other capitalist empire in the past, like Britain and France, has always been imperialism, which only correlates with the ideas of capitalism. For the United States, liberalism and democracy are simply used to safeguard their real interests. These ideas of propagation are not in correlation with the method of implementation. They use academics to generate terms like liberal markets and liberal globalism when in reality there is nothing liberal about it. It is just a marketing scheme to gain hegemony over everyone else because marketing is the engine of capitalism. For this very reason, the public is left puzzled because the American strategy doesn’t correlate with its real objectives in foreign lands as compared to the way its advocated.

America utilizes the centre left and the centre right approach within its political spectrum. This creates a balance and compromise between the two parties also known as bi-partisan politics, which in reality creates a balance of deluding the public and the world with ideas of liberalism, while simultaneously accomplishing its imperial objectives. Both come under the liberal order and both believe in liberalism; however, it varies within the both parties. These two parties are the democrats and the republicans where one is liberal and the other is conservative. The Liberal democrats are more liberal in their styles and means but very deluded and anaemic. The others are the Conservatives, who also believe in liberalism but still maintain the traditional values and resist to further experiment with liberalism.

President Bush was still part of the liberal order even though he did nothing but annihilate two countries. This is because he still propagated free markets and globalism even though he was neo conservative. Obama, however, resisted the confrontational approach and pursued more of a relaxed foreign policy. However, he still got pulled into the Syrian conflict because he had to resort to imperialism in one way or another. These are styles and means towards their inseparable method of imperialism, but there is an issue. The styles within the Liberal democrats don’t correlate with the methods of imperialism at all because they give more focus on idealism, which moves them further away from the method of imperialism. But the styles of the conservatives which is more illiberal compared to the left is, however, more synonymous with the imperial method and not too far off. This is why America fails to produce a clearly defined grand strategy where the public can understand the country’s clear objectives. The real reason for this is that the American political elite are continuously deceiving the public with different styles and means to cover the same indispensable method of imperialism.

This is why the centre left has always been weaker when it comes to getting things done and results in contradicting themselves even more. As for the centre right, it is not really concerned with idealism, and get things done with a bit more efficiency. But both the left and the right have issues in reconciling between idealistic concerns of human rights, democracy, freedom with their true ugly agenda of capitalism.

Today America is facing a crisis ever since the Iraq invasion, Afghan invasion and the 2008 financial crisis. It also struggles to portray its global military power because of its imperial commitments have exceeded its GDP. Overall America’s domestic stability has resulted into a debris due to liberal globalism; therefore, Trump is utilizing protectionism and withdrawing from several multi-lateral trade agreements.

Since Trump’s arrival, the political spectrum has been polarized and has gone from centre left-right to far right. Trump does not care about liberalism, multilateral agreements and cooperation between states on liberal principles at all. Rather, he cares about fixing the United States and the United States only. This approach of assertiveness has brought a new phase within the American politics, which appeals to his supporters because it is straightforward and Trump has won their support by manipulating their nationalistic and patriotic sentiments.

Trump wants to maintain the US a dominant position by focusing on strategic places of interests, while withdrawing from others to bring troops back home. This strategy is more focused on maintaining the US position rather than further expanding it with all means necessary. However, compared to the previous presidents, the strategy still remains doubtful. Trump is not busy with utilizing discretion or by prompting principles of the liberal order and for this very reason, Trump is getting things done more efficiently compared to all his predecessors. The issue that still remains is that there is no clear strategy to keep the US as the leader of the “free world” and to maintain its deception, while clarifying its real objectives because it just cannot admit its real objectives to the American public.

Since the pressure has mounted within the US, the elites have been divided and the compromise has ceased to exist amongst them. Some elites prefer liberal global trade as for others believe that it hurts the United States rather than benefiting it. The American superpower can no longer continue the paradox between the liberal ideas and the imperial method, as the public is becoming more disgruntled where the domestic situation is far from being par.

Today there is a division between the elites of America; hence, everyone is for themselves and this is due to their secular creed, which generates individualism due to the emphasis on the survival instinct. There is an internal war between the elites of America regarding America’s future. America can now only maintain what is left of it because America is about to lose its status as the only global superpower. This is because there is no more grand strategy to amend the domestic and foreign crisis, which contains objectives that demand clarity from the public. Decline has strengthened within America owing to the deviation from its politics, which will very soon affect the intellectual thinking and finally the legislative thinking. The only question that remains is who will be the next rising power?