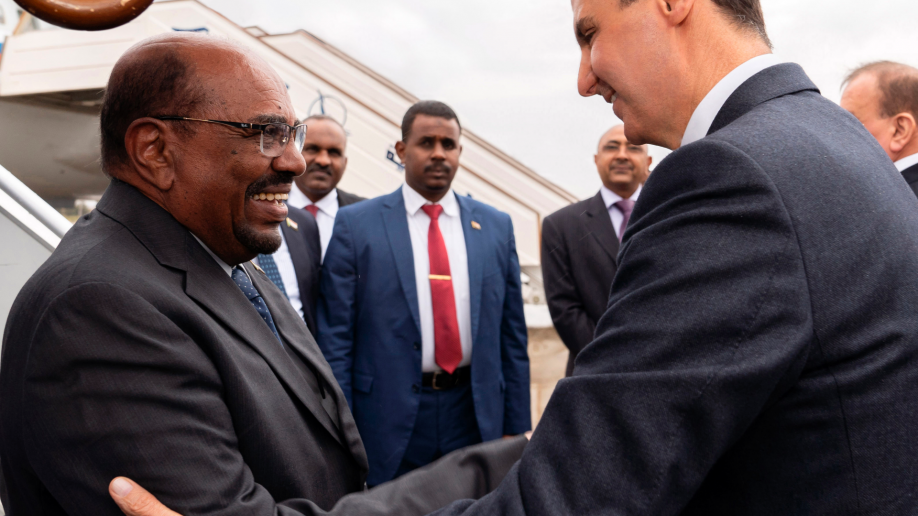 On Sunday evening, 16/12/2018, the Sudanese President Omar al-Bashir ended a surprise visit to the Syrian capital Damascus, during which he held talks with President Bashar al-Assad, who welcomed him at the airport. This visit was not announced, it took place in complete secrecy through arrangements and a Russian plane, as diplomatic sources confirmed to Sudan Tribune. Bashir is considered the first Arab president to visit Syria since the outbreak of the revolution in this country in 2011.

In light of this strange reality, we in Hizb ut Tahrir / Wilayah of Sudan illustrate the following facts:

Firstly: The whole world has heard of the brutal massacres committed by today’s criminal Bashar al-Assad against his people, massacres committed using explosive barrels in the markets and schools, rockets, as well as chemical weapons that killed infants and elderly.  Not to mention the crimes and atrocious forms of torture committed in prisons and detention centers, and the displacement of the cities which rose up in order to repulse injustice and demand the establishment of justice and security; which can only be implemented through establishing the rule of Islam.

Secondly: The step taken by al-Bashir, shows that all Arab rulers – despite their crimes – are embarrassed from taking such a step, to break the isolation of the criminal Assad regime, but history will record the shamefulness and disgrace until the Day of Judgment of those who committed it.

Thirdly: It is clear that the visit came in accordance with US instructions to break the isolation of the Syrian regime – the veteran American agent, it was not a mere visit, but there are other roles assigned to others, the BBC has published on Sunday, 16/12/2018 – on the day of Bashir’s visit to Syria – “Turkish Foreign Minister Mouloud Chaochoglu revealed Turkey’s willingness to consider working with Syrian President Bashar al-Assad if he wins democratic elections.” Al-Quds Al-Arabi Newspaper reported on December 19, 2018, quoting The Independent, British newspaper, “It is imperative that the US president, Donald Trump, is the one who assigned Bashir this visit, but Trump’s attempt to rehabilitate Assad would be a losing battle”.

Finally we say, that the situation of the Muslim Ummah is an abnormal situation, because there is no State that protects and defends the weak Muslims. If the Muslims had a Khaleefah (Caliph) to do so, the Prophet ﷺ expelled the Jews of Qinqaa from the city because they killed one Muslim man and Al-Mu’tassim sent a whole army to free one woman, thus the Khaleefah of the Muslims is the only one who supports the weak, not those rulers who sold their Deen, and handed over their lands to the colonist Kuffar. Above all, the Khaleefah will implement the laws of Allah (swt), and cut off the hands of the colonists. In order for the Ummah to elevate the humiliation imposed upon her, she should work with her sons in Hizb ut Tahrir to establish the leadership of Islam through the implementation of the Righteous Khilafah on the method of the Prophet; the promise of Allah and the glad-tidings of His Messenger ﷺ who said:«ثُمَّ تَكُونُ خِلَافَةً عَلَى مِنْهَاجِ النُّبُوَّةِ» “And then it will be a Khilafah on the method of Prophethood.” (Imam Ahmad)