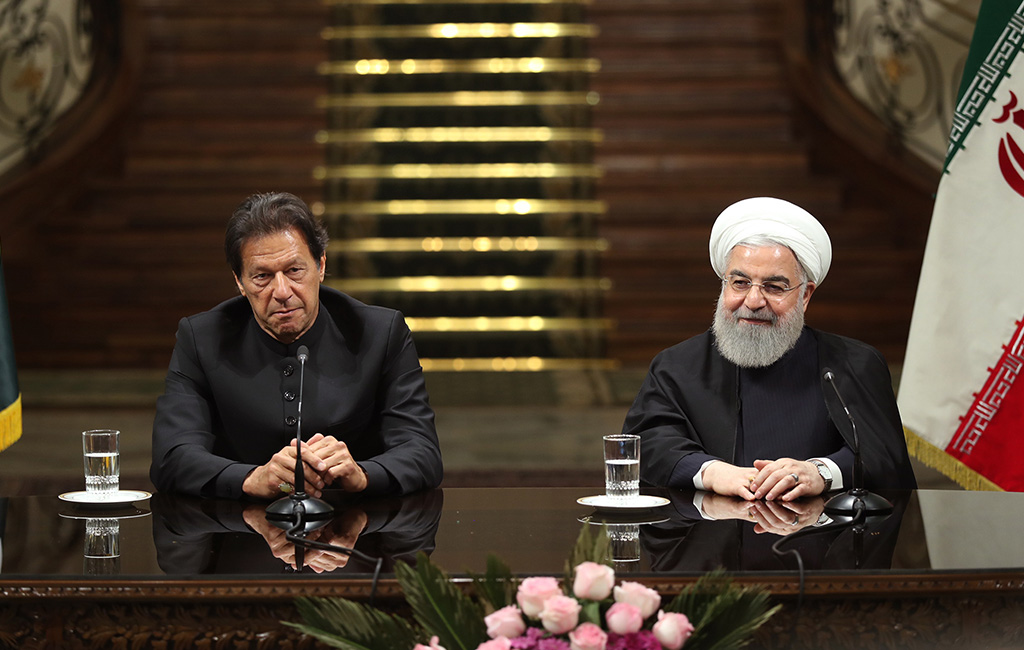 Pakistan on 16th May 2019 blamed the United States for heightening tensions with Iran in the ongoing crisis in the Persian Gulf and called on both sides to show restraint. “We expect all sides to show restraint. … Pakistan desires that all issues should be settled through peaceful dialogue and engagement by all sides,” Foreign Office spokesman Dr Mohammad Faisal said at the weekly media briefing. “War is not an option,” he emphasised.

The spokesman was responding to questions about the deepening US-Iran crisis that has led to a massive military buildup by the US in the region, in response to an unspecified threat. As part of its offensive posture in the Persian Gulf, the US has deployed an aircraft carrier, positioned B-52 bombers at Al Udeid Air Base in Qatar, and sent F-15 jets to the region. The spokesman of the Bajwa-Imran regime on one hand blamed US for heightened tensions but on the other hand called for all sides to exercise restraint. Thus the regime did not distinguish between an aggressor and the victim of aggression. The mentality of this regime is same as that of the previous regimes which is not to confront US and its allies like India. So it gave the same advice to the Muslims of Iran, calling them to the same restraint that it has adopted towards US and Indian aggression against Pakistan. This approach of abandoning a victim of the aggression of America has never benefitted Pakistan, as we have witnessed in the case of Afghanistan. Pakistan not only abandoned the Muslims of Afghanistan, it became a non-NATO ally and supported America in its attack and occupation of Afghanistan. America rewarded this betrayal by allowing India to establish its footprint in Afghanistan, which has resulted in weakening of Pakistan.

America only dared to attack Afghanistan when it gathered the support of all the Muslim countries in this region. Similarly America cannot dare to attack Iran if Muslim countries of this region, including Pakistan, do not become allies of the US or remain silent over its aggression. If any one country of this region, including Pakistan, openly oppose US aggression and announces to stand with our Muslim brothers in Iran, then the US will not be in a position to even give a threatening statement. However this requires Imaan in the Islamic Aqeedah and obedience to the command which clearly asks Muslims to not abandon your brother when he is in need of your support. Allah (swt) said, وَالْمُؤْمِنُونَ وَالْمُؤْمِنَاتُ بَعْضُهُمْ أَوْلِيَاءُ بَعْضٍ يَأْمُرُونَ بِالْمَعْرُوفِ وَيَنْهَوْنَ عَنِ الْمُنكَرِ “The believing men and believing women are allies of one another. They enjoin what is right and forbid what is wrong” [Surat al-Tawba 9:71]. And the Messenger of Allah ﷺ said, «الْمُسْلِمُ أَخُو الْمُسْلِمِ، لاَ يَظْلِمُهُ وَلاَ يُسْلِمُهُ» “A Muslim is a brother of another Muslim, so he should not oppress him, nor should he hand him over to an oppressor.” (Bukhari). So the coming Khilafah (Caliphate) on the method of Prophethood will not abandon any Muslim in front of the aggressor. Instead its mighty armed forces will be moved in their support and no aggressor will dare to threaten any Muslim anywhere in the world. Allah swt said, لَاَنۡتُمۡ اَشَدُّ رَهۡبَةً فِىۡ صُدُوۡرِهِمۡ مِّنَ اللّٰهِ‌ؕ ذٰلِكَ بِاَنَّهُمۡ قَوۡمٌ لَّا يَفۡقَهُوۡنَ “You (believers) are more fearful within their breasts than Allah, that is because they are a people who do not understand” [Al-Hashr: 13].