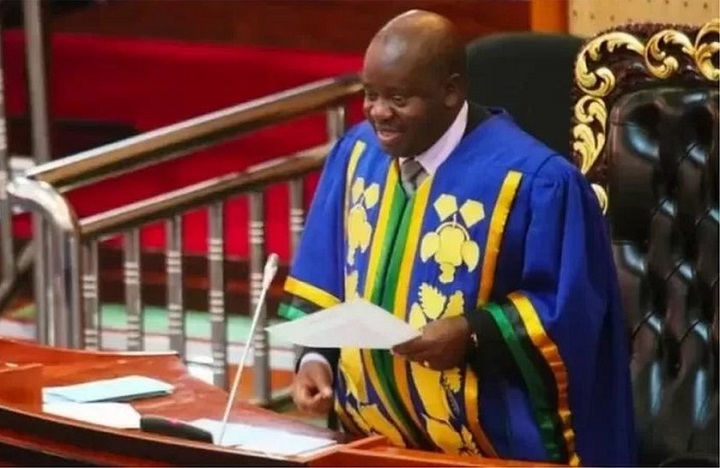 The Speaker of Tanzania’s National Assembly, Job Ndugai has on Thursday 06/01/2022 resigned from the position as a result of his recent public criticism to the President regarding the loans and growing national debt.

Comment:
On 28/12/2021, the National Assembly Speaker Job Ndugai who is the 7th speaker since independence made a statement questioning the ongoing borrowing from the International Monetary Organizations whereby he claimed thatTanzania risks being auctioned due to rising national debt.

The criticisms from Job Ndugai were received with a great deal of protest especially from officials of his ruling party (CCM) and fellow MPs forcing him initially to issue a public apology, but it seemed that his apology was not accepted. A few days later, while the President Suluhu Hassan was addressing her Cabinet ministers, regional commissioners and regional chairpersons, she made serious statement against Ndugai:

“It is inconceivable that the head of one of the pillars of the State can stand up and say what he said. It all has everything to do with 2025, (general election),” President Hassan said.

Under that situation Speaker Ndugai had no choice except to resign.

Of course Ndugai’s statement was strong of its kind though it is truth from the liar, since it is well known that the National budget and borrowings are approved by the parliament where the Speaker could manipulate and influence the denial of such loans through the National Assembly, but he and other members of the parliament approved the government decision to borrow.

Furthermore, the Speaker as the head of one of the main arm of the state enjoys access and power to seek an audience with the President (personally) and discuss on the trend of borrowing.

With all this, it is clear that he is not different from other democratic politicians who pretend to care welfare of society, but in reality they play with the minds of people for their own political agenda.

This scenario gives us a vivid picture that the democratic notion of “freedom of expression” is an empty slogan. It is only championed when it does not contravene and jeopardize the interests of the government and politicians. So, the claims that it is the primary rights to the citizens to express, receive, seek and be informed on any information that relate to their lives is far from the fact.

On the other hand, it depicts clearly the non-existent reality of the concept of ‘separation of power’ and independence between the three arms of state that is the Executive, Parliament and Judiciary. The claim will remain a delusion and unrealistic since its inception by the Frenchman Baron de Montesquieu in the year 1748 until the end of day.

Above all, since democracy is built upon benefit criteria, it would always cause disagreement, tug of war and disorders, disputes among people and its proponents who always compete day and night in power mongering.

Developing nations including Tanzania and humankind in generally should notice the invalidity and inability of democracy political system to tackle human problems. Instead, they should think of Islam having an alternative fair political system to govern their affairs and lives and save humanity from all political and economic disorders.