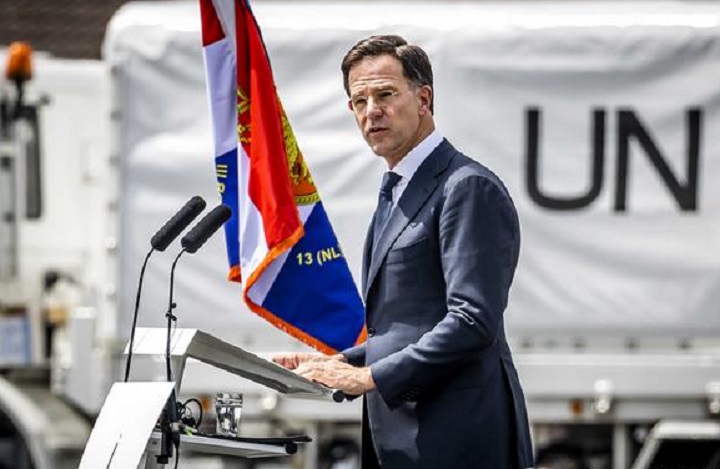 Prime Minister Mark Rutte made an official apology to hundreds of Dutchbat veterans for the government’s conduct regarding the tragedy in Srebrenica in 1995. He did so during a “day of recognition and appreciation.”

Comment:
In 1995 Serb forces entered the Bosnian town of Srebrenica which was formally under the protection of the Dutch UN battalion “Dutchbat”. Without any resistance from the Dutchbat battalion the Serbian aggressor was able to deport and execute 8,000 Muslim men and boys and dump their bodies in mass graves. The Muslims were not just handed over to the aggressor but the Dutchbat even assisted the Serbs with the evacuation of Muslim men knowing that they will be tortured or even be killed! However, since this tragic event, the shame, disgrace and lack of responsibility of these Dutch soldiers turned into recognition and appreciation. The “veterans” even got a symbolic amount of 5000 euros tax-free. While the families of the victims of the genocide of Srebrenica did not receive any compensation till now. Since the compensation for the families of the victims of the genocide is related to the responsibility of the Dutchbat. The official apology of the Dutch government to the Dutchbat is a confirmation that it is not accountable with regards to the genocide, which, by the way, is entirely in line with the conclusion of the NIOD report on Srebrenica and the conclusion of the UN, which state that the Dutchbat do not share in the blame in respects to the genocide. So, the Dutch government, its military forces and its allies distanced themselves from their responsibility and accountability with regards to genocide of Muslims at the hearth of Europe.

This weak and deceitful stance represents just another expression of the stance of many Western countries against Islam and the Muslims.

The deep-seated sentiments of hatred and resentment toward the Muslims, among a large part of the Serbs, were expressed through Serbian General Ratko Mladic during a short video message released to the public before he gave the order to massacre the Muslims. He then said, “Here we are, July 11, 1995, in the town of Srebrenica, in Serbia. On the eve of the Serbian holy day, we give this city back to the Serbian nation. In memory of the uprising against the Turks (read: The Islamic Khilafah State of the Ottomans), the day has come to take revenge on the Muslims.” Also, a video footage surfaced of him calling out to Muslim children with “Where is your Allah now, it is Mladic who is going to save you.”

The Dutchbat, whose job it was to protect the Muslim enclave, knew about this deep-seated hatred of Muslims. In fact, in the Dutch camp there was partial sympathy for the Serbs and a shared hatred of the Muslims. There are testimonies from physical intimidation, such as pointing guns at innocent Bosnian Muslims and expressing the desire to run Muslims over with tanks, to assault and rape of Muslim women! Even the graffiti on the walls of the compound of the Dutch soldiers, described the hatred towards Bosnian Muslims.

The question then is: how real is the expectation that these Dutchbats will sacrifice their lives to protect these Muslims?

The bottom line is that The Netherlands, Europe and the entire UN failed to protect the Muslims in the West against Muslim hatred and even distanced themselves of any responsibility. The Bosnian Muslims have been abandoned. They will always be in this condition until Muslims and Muslim countries reunite under one leadership whose priority is to protect Muslims wherever they are.

The Prophet (saw) has said,

“Verily the Imam (Khalifah) is like a shield, from behind which you fight and are protected.” (Sahih Muslim)