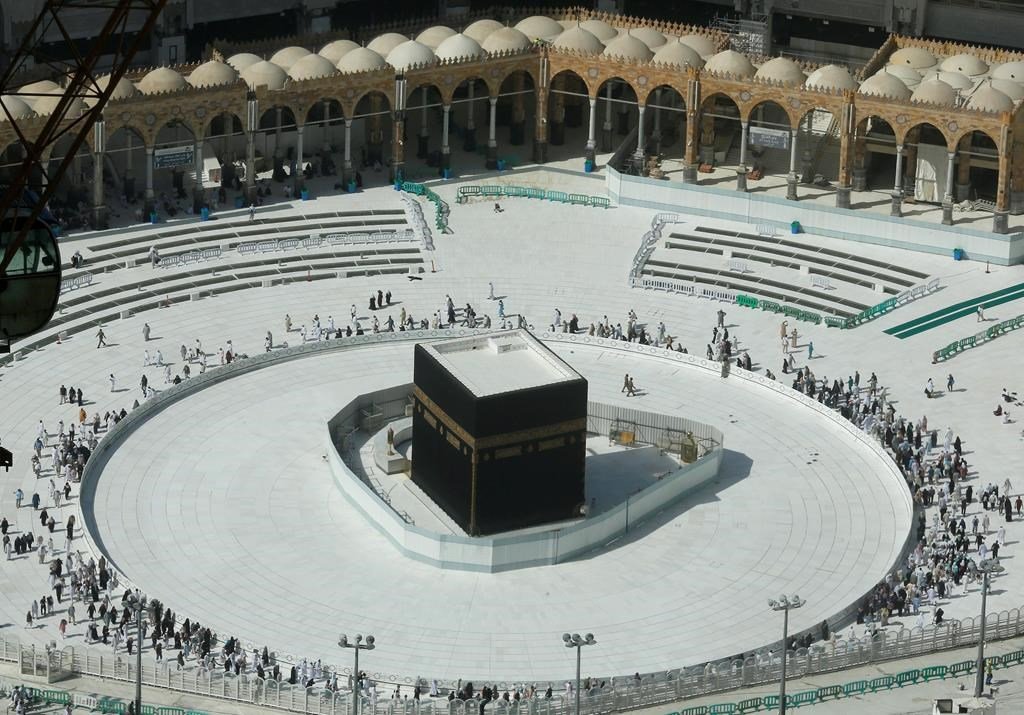 Saudi tells Muslims to wait on Hajj plans amid coronavirus crisis. Minister of Hajj and Umrah asks Muslims to defer preparations for the annual pilgrimage scheduled in late July due to the pandemic. Around two million people visit Mecca to perform the annual pilgrimage, which this year was set to begin in July, but plans have been thrown into doubt as the kingdom has recorded 1,563 coronavirus cases and 10 deaths. Like many countries, Saudi Arabia has enforced a lockdown and curfew in an attempt to stem the outbreak, and entry to the holy cities of Mecca and Medina has been severely restricted. Riyadh has already suspended the lesser Umrah pilgrimage. [Middle East Eye, 01 April 2020]

Hajj has been cancelled several times over the centuries, However since the Kingdom of Saudi Arabia’s foundation in 1932 it has never missed a year, nor even during the Spanish flu pandemic of 1917-18 that killed millions of people worldwide. The decision was made taking into account the current situation of this COVID-19 pandemics.  At the same time, observers are perplexed about why, in order to prevent the spread of coronavirus and its spread, the authorities suspends Umrah and also planned to cancel 2020’s Hajj, while all other industries specifically Oil industries in the country operate in the same mode. Amidst of this lockdown and curfew because of the spread of COVID-19, where the global demand for oil and gas is falling sharply, Saudi showed obedience to her master America by raising its production to confront Russia. Saudi Arabia surprised many in OPEC by publicly pushing for steeper and longer production cuts than had been expected. Moscow felt the shock by Saudi Arabia at the OPEC summit, but the following day, Saudi Arabia responded and slashed its crude oil prices and promised to ramp up oil output. This created a supply war on oil price with Russia [Al-Hurra (American) 19/3/2020]. After doing this, MBS is now ready to cut production to raise the price on Trump’s insistence [According to The Washington Post]. The Saudi regime is fully subdued to American control without the least element of independent thinking. It was Trump that earlier commanded Muhammad bin Salman to crash the international oil price in order to benefit the American consumer. And, although quarantine measures are part of Islam and Umar ibn al-Khattab (ra) in his life implemented the first quarantine measures during the epidemic in Sham, nevertheless, they should be implemented sequentially, and not only in relation to religious and spiritual matters.

Moreover it is absolutely forbidden to abandon the Hajj under the pretext of everyone is vulnerable to this COVID-19 infection. As Hajj is one of the pillars of Islam and it is obligatory upon the state to make the arrangement for the Muslims to perform this obligation. Allah (swt) says: وَأَتِمُّوا الْحَجَّ وَالْعُمْرَةَ لِلَّهِ  “And Complete the Hajj and Umrah for Allah…” (2:196). Thus in the Khilafah state, Hajj will not be stopped and suspended during these pandemics. Rather it is organized with proper precautions and measures. The Prophet ﷺ said: «لَيُحَجَّنَّ الْبَيْتُ وَلَيُعْتَمَرَنَّ بَعْدَ خُرُوجِ يَأْجُوجَ وَمَأْجُوجَ» “The people will continue performing the Hajj and ‘Umra to the Ka’ba even after the appearance of Gog and Magog.” [Sahih Bukhari].

It is absurd that the Muslim rulers even in this pandemic obey and care for their master’s order to benefit them by not closing industries like Oil and Gas but abandon the Hajj, Pillar of Islam. Moreover this is not a new issue for Saudi regime to abandon the Hukum of Allah on its land. Today they abandon the Umrah and decided to cancel Hajj by making use of COVID’19 as an excuse. Before this, since its establishment they had abandoned numerous Ahkam of Allah (swt) and currently under the leadership of Salman and his son MBS, Saudi is swiftly moving towards westernization of its nation.