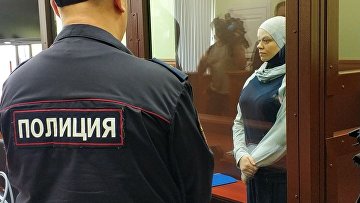 On July 18th, in St. Petersburg, the Muslim woman Jannat Bespalova (Alla Bespalova) was pronounced guilty for participating in Hizb ut Tahrir’s activities as an exchange for Bespalova’s confession of the charges raised against her and denying her the right to challenge the verdict, and the court did not consider evidence of her conviction and sentenced her to five years’ imprisonment.

Jannat heard the ruling quietly and took advantage of the presence of the media and addressed a word of thanks to all those who supported her and defended her case and said: “May Allah reward you with goodness.”

In turn, we thank all Muslims from all over the world who have supported our Muslim sister and protested her arrest and Russia’s anti-Islam policy.

A year ago, Jannat’s husband, Issa Rahimov, was arrested on charges of organizing Hizb ut Tahrir activity. He was sentenced to 12 years in prison with hard labor, and now his wife is also imprisoned. This shows the face of modern Russia where things are turned around; criminals have with unlimited power and are immune to the law, while the pure Muslims are thrown in prison because they want to live according to the word of “La ilaha illa Allah” (there is no god but Allah).

“And they resented them not except because they believed in Allah, the Exalted in Might, the Praiseworthy,”
[A-Buruj:8]