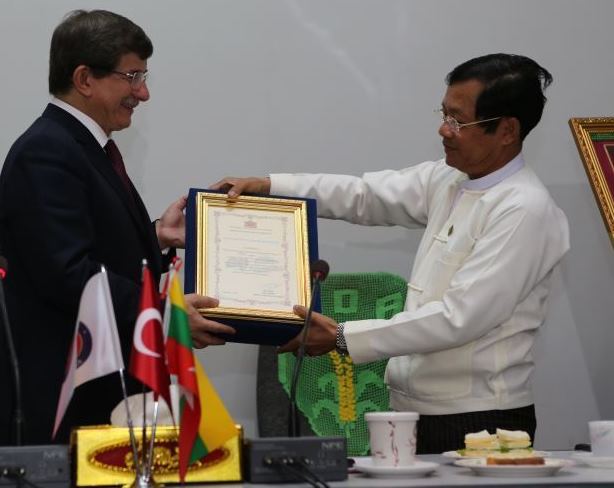 That the plight of the Rohingya Muslims sparks thought and action within the Ummah is a natural process that is directly derived from our Islamic Aqeedah and based upon the narration of our Prophet ﷺ when he said:

“You see the believers as regards their being merciful among themselves and showing love among themselves and being kind, resembling one body, so that, if any part of the body is not well then the whole body shares the sleeplessness (insomnia) and fever with it.” (Sahih Bukhari)

It is also the reason why the Turkish Minister needed to make the statement in the first place, because of rising concerns within the Ummah about their fellow Muslims. In the same manner that the reaction given by the Prime Minister of Bangladesh: “that Muslim refugees fleeing violence in Myanmar are not her country’s responsibility,” ignited anger and demonstrations amongst the Ummah.

Our Aqeedah has shaped the way we consider the situation of other Muslims. It teaches us that we need to imagine that we ourselves or our loved ones are in the same situation. Only then will we be able to consider what is necessary to change the situation of the Rohingya Muslims and only then will it be done in a correct manner one that we would long for ourselves. Now let us for a moment think about the predicament of the Rohingya Muslims. A minority group who have been forced to leave their homes and villages to escape the brutal military killing sprees of the Myanmar government, who have been tortured, raped and burnt alive all because they say: “La ilaha illallah.”

Envision being in this situation and hearing the statement made by the Turkish minister. Will it satisfy our needs? Will it bring justice for the living and for the ones already killed by this brutal regime? Will it solve the problem and will it stop the brutal attacks of the Myanmar army?  But most important, what message are we as an Ummah giving when we don’t stand up against the great injustice, that being a Muslim, is now a reason to be attacked.

There is at least one statement that will put an end to the massacres of the Myanmar army and that is, knowing that the second largest force in NATO, is on stand by to protect their Muslim brothers and sisters. So it would be more befitting and appropriate for the Turkish minister to react to the situation in Myanmar by saying that the Turkish Army is ready to intervene if the violence doesn’t stop at once.

When looking at the situation of the Rohingya Muslims, the symptoms we are seeing is that people are being killed, tortured, raped and forced to leave their homes. The reason for this problem is that there is no entity which protects the Rohingya Muslims. No army who will come to their protection! No authority which will bring these criminals to justice. The cause for this problem is that the Muslim leaders aren’t referring to the Shariah of Allah when organising their countries. Or in this case when organising their armies.

So the solutions to the problem isn’t to pay for the costs that their stay will amount to, if they make it to Bangladesh. It won’t bring any justice and it surely won’t change the vulnerable position of the Rohingya Muslims. The only solution to the problem is to organise the armies of the Muslim world and spread the message that we have got the backs of our Muslim brothers and sisters.

“And if they seek help of you for the religion, then you must help.”