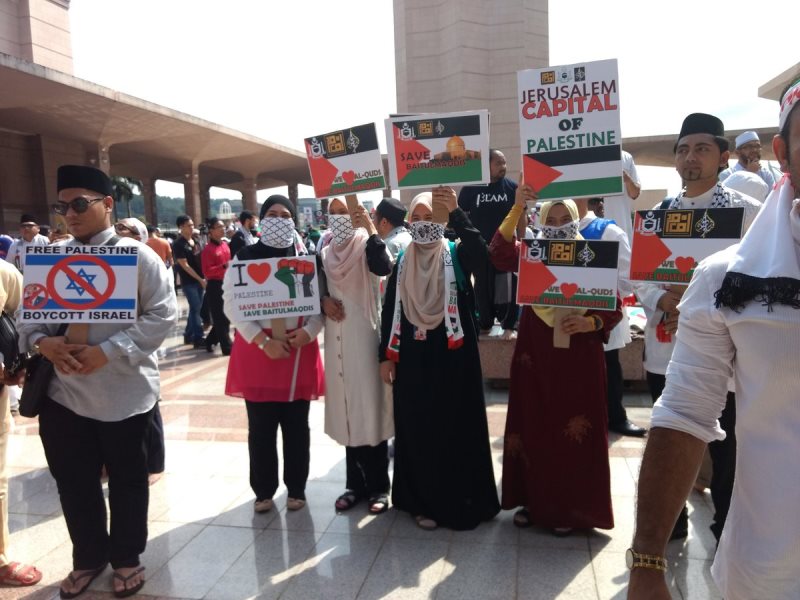 Last Friday, 22nd of December 2017 saw Malaysian political rivals put aside their differences to unite behind the “Solidarity to Save Baitul Maqdis” rally here at Putra Mosque in Putrajaya. Thousands were present in support of the rally including religious authority officers and opposition parties. Najib, the Prime Minister of Malaysia gave a very strong speech in the rally – “We will not budge, we will not budge in our defence for the plight of the Palestinians; returning Baitul Maqdis to them…even if it means cutting me up into pieces, leaving behind only one piece of ‘meat’, we will not budge”. This is a second rally organized by the government in solidarity with Muslims who are being persecuted around the world. In December 2016, Najib organized a similar rally in support of the Rohingya Muslims.

A critical person witnessing these events can’t help but question why are rallies being held by the government in power when it is exactly these people in power who are supposed to act on the issues? When the rally on Rohingya was organized, Najib also gave a fiery speech by mentioning that “I refuse to shut my eyes and my mouth. We will continue to fight until the Rohingya are safe”. Just as in the case of the persecution of the Muslims in Myanmar, the question of Baitul Maqdis and Palestine as a whole can never the solved by the mere rhetoric of the politicians. Until today, the persecution of Rohingya Muslims is continuing to occur. The agreement between Myanmar and Bangladesh to allow refugees to return to their homes is at best a lame effort to show that something ‘concrete’ has been done. And when Trump declared that Baitul Maqdis is the capital of the Jewish entity, Muslim leaders, including Najib, convened in Istanbul and manufactured more rhetoric.

A critical person would certainly see that the gathering organized by the government merely functions to attract the emotions of Malaysians and to show that the government is ‘doing something’ although this in reality will not solve the problem of Baitul Maqdis or Palestine. The duty of the government is to declare jihad to liberate Baitul Maqdis, not hold rallies. For the ummah, it is of course desirable to organize rallies but for governments, the power is in their hands to mobilize armies, not hold rhetorical demonstrations. All Muslim leaders, despite their fiery rhetoric, still hold on to the ‘two-states solution’ and the 1967 borders which are clearly forms of recognition to the occupation and the settlement of the Jewish illegal entity on the Palestinian land, and is a clear betrayal to Islam and the Muslim ummah. Despite the flaming rhetoric, none of the Muslim nations, including Malaysia, even dared to warn to expel the US ambassadors in their countries! Worse, Turkey even declares that their economic relation with the Jewish entity gets stronger by the year!

Baitul Maqdis will never be liberated by the drama and rhetoric of the Muslim rulers. The blessed land will only be liberated by jihad. Muslims rulers are obliged to dispatch armies to do jihad in Palestine in order to liberate Baitul Maqdis from the grip of the Jewish entity who are backed by the United States. However, looking at their true response on the issue, it is not expected that these rulers will declare jihad against the Jewish entity. Our only hope is the Khilafah. Working to establish this mother of all furud is obligatory upon all Muslims and when it is established very soon, jihad fi sabilillah will be launched by the Khalifah to liberate Baitul Maqdis as had been done by Khalifah Umar al-Khattab and Salahuddin al-Ayubi in the past.