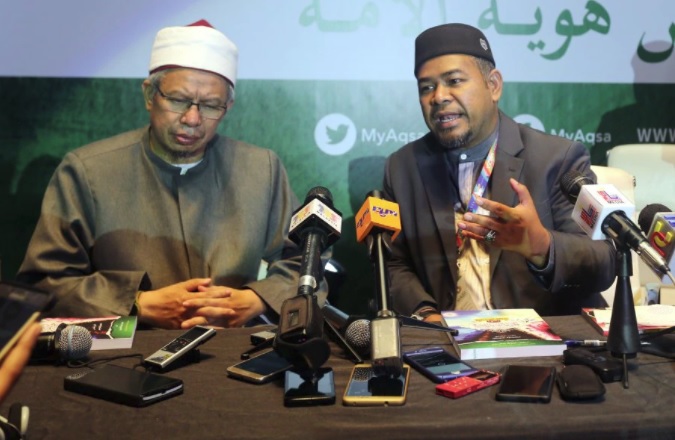 One hundred Ulama from 30 countries attended the World Islamic Scholars Round Table Conference on Jerusalem (MART) in Putrajaya, Malaysia to discuss the status of Al-Quds, following the announcement by US President Donald Trump recognising Al-Quds as the capital of “Israel”. The conference which was organised in conjunction with the MyAQSA festival on 27-28 January 2018, was jointly organised by the MyAQSA Foundation, the Islamic Development Department of Malaysia (JAKIM), the Palestinian Diaspora Scholars Union and the World Union of Muslim Scholars. At the end of the conference, 14 resolutions were issued.

Dear beloved Ulama! Do you not realize that Al-Quds was first liberated by Caliph Umar al-Khattab by way of jihad? So was the second liberation of Al-Quds from the hands of the Crusaders by Salahuddin al-Ayubi. The current reality is that Al-Quds was taken from us by force and is under the hands of the Jewish entity who control it with fully equipped armies. Yet do you not realise O inheritors of the Prophets, that in order to liberate Al-Quds, jihad is the only way!? Is there not a single one of you realised that the Jewish entity does not understand any language except a language of war? Is there not a single one of you who is brave enough just to mention the word “jihad fi sabilillah”?

Dear beloved Ulama! You are not only supposed to realise the true solution for Al-Quds, but you should also have the courage to say the truth wherever you are and in whatever situation it could be. By Allah, Al-Quds and Palestine will never be liberated by organising festivals and conferences alone. Thousands of conferences have been held but Al-Quds is still incarcerated and thousands of resolutions have been adopted, only to the disappointment of Al-Quds! How many more conferences are to be organised and resolutions to be adopted before you realise that the only way to liberate Al-Quds is by jihad fi sabilillah? The Ulama, as the inheritors of the Prophets, must look at Al-Quds exactly the way Umar al-Khattab and Salahuddin al-Ayubi looked at it and only then the liberation of Al-Quds shall be realised with the permission of Allah (swt).

Hizb ut Tahrir shall never remain silent from reminding the Ulama, the rulers, the armed forces and Muslims in general of the fact that the one and only way to liberate Al-Quds and Palestine is by declaring jihad fi sabilillah and mobilising the Muslim armies towards the said Blessed Land. Hizb ut Tahrir shall never stop working towards establishing the Daulah Khilafah ar-Rashidah ala minhaj nubuwwah, (Righteous Caliphate on the method of the Prophethood) which upon its establishment soon, the Muslim armies shall be mobilised to liberate and return Al-Quds and Palestine to Muslim hands, Insha Allah.