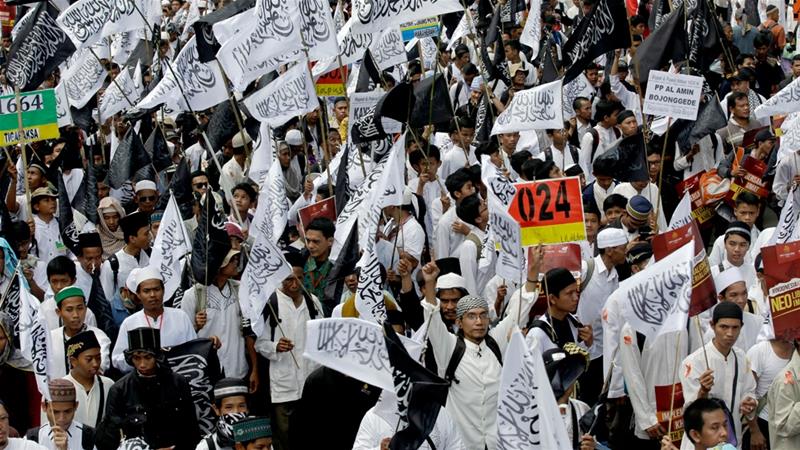 In front of about ten thousand protesters, the Vice Chairman of Alumni Presidium 212 Hasri Harahap read out the five resolutions of the Rally in Defense of Islam 287.

First, “To all Indonesian Muslims, regardless of the madhabs (school of thought) and the parties they belong to, in fact, we are one body. The Prophet said that if one Muslim were one body, then Hizb ut Tahrir Indonesia (HTI) would be an integral part of the Muslim. HTI became the first victim, and most likely there will be other victims. People are not aware, they are not aware because they will eventually become the next target,” said Hasri reading the Resolution to Reject the Government Regulation in Lieu of Law (Perppu) on mass organizations, Friday (28/7/2017) at the Horse Statue, National Monument, Jakarta.

Second, the House of Representatives should think about the long-term and not the short-term interests of the effects of the law. “Be the real institution, do not simply serve as a rubber stamp for the ruler in return for worldly rewards,” he said.

Fourth, MUI (Indonesian Ulema Council) is expected to give purely religious opinions, so that MUI’s opinion becomes substantial, do not open the door of people to become a regime.

Fifth, “To the President, we remind you that the political power in 2014 is only a trust from Allah, Allah is willing or prolong it in this world, but we also wish from the Presidium 212, especially the Honorable President to be willing to withdraw the law. According to Allah’s will, keep the mandate from the power of the people carefully,” he concluded.