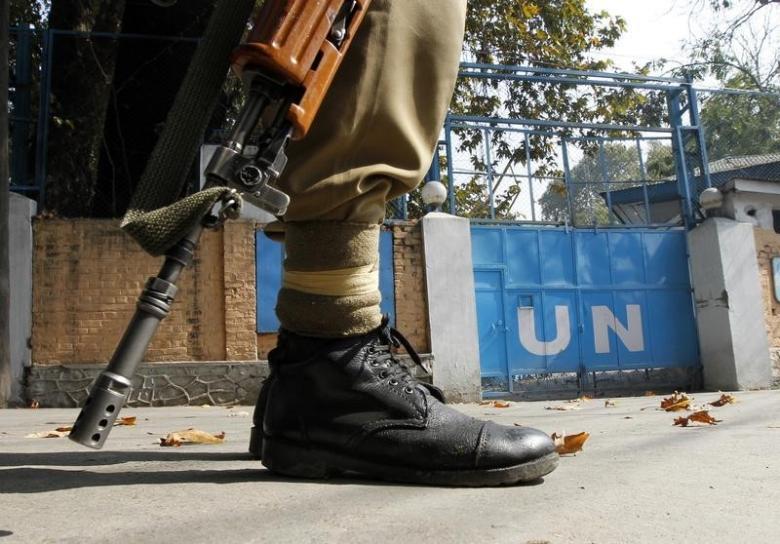 US Ambassador David Hale on 22 May 2017 during a meeting with Army Chief Gen Qamar Bajwa at the General Headquarters called for elimination of terrorism from Pakistan’s soil. It was a follow-up to US President Donald Trump’s speech at the Arab-Islamic-American Summit in Riyadh in which he had called on Muslim countries to ensure that “terrorists find no sanctuary on their soil”. The Inter-Services Public Relations, meanwhile, in its statement said: “COAS (Gen Bajwa) reiterated Pakistan’s stance that its soil is not being used for terrorist activities against any other country nor shall we tolerate any such action against Pakistan.”

Pakistan is the world’s only Muslim nuclear power and Bajwa commands the sixth largest army in the world. Yet, instead of expelling the US envoy for his audacity, Bajwa listened meekly, as a slave would his master. He listened despite the US’s own terrorist activity throughout the world, including Afghanistan, Yemen and Iraq, through its countless military incursions and intelligence black operations. He listened despite US support for the Jewish entity and its use of lethal force on stone throwing Muslims in Occupied Palestine. And he agreed despite the US support for India and its campaign of killing, maiming and blinding in Occupied Kashmir.

There is no justification whatsoever for Pakistan, a state established in the name of Islam, to mobilize its armed forces to protect the US terrorists in Afghanistan and the Indian terrorists in Occupied Kashmir. It is the duty of the Muslims to fight the occupying forces and end their terrorism decisively. And this will never occur whilst spineless rulers such as those of the Bajwa-Nawaz regime are in authority.

A conference of Pakistan Army’s commanders has stressed the need for introducing reforms in the Federally Administered Tribal Areas (Fata). The 75th conference of Annual Formation Comm­anders held at the GHQ here on 24 May 2017 was presided over by Chief of the Army Staff (COAS) Gen Qamar Javed Bajwa, said a press release of the Inter-Services Public Relations. The participants were briefed on geo-strategic environment, progress of Raddul Fasaad military operation, operational preparedness against conventional threat and other matters concerning national security.

The greatest challenge our armed forces face is to end Pakistan’s alliance with the United States. Far from being a source of strength by which to counter India’s regional mischief, this alliance is the cause of our being progressively and perilously weakened before India.

Through its alliance in the era of General Musharraf, the US exploited the intelligence, bases and air corridors of our armed forces to make possible its invasion and subsequent occupation of Afghanistan in the first place. Then, the US promptly opened the doors of Afghanistan to India to grant it an unprecedented presence there, which the Hindu State began using as a base to destabilize Pakistan, igniting the fires of chaos and Fitna throughout our soil. Firmly allied to the United States, General Musharraf then declared Jihad in Kashmir as “terrorism,” an American demand that granted great relief to India, whose cowardly troops were shaken by small groups of poorly armed, yet highly motivated Muslims.

Then, through its alliance in the era of General Kayani, Washington ensured our armed forces were massively deployed on the Western border. It is this American demand which not only granted India on the Eastern border even greater relief, further bolstering its regional ambitions, it reduced Pakistan’s armed forces role to that of a security detail for the American and Indian presence in Afghanistan.

Then, through its alliance in the era of General Raheel, Washington brought further relief for India, through ensuring the forceful suppression of Islam under the banner of “fighting extremism,” stabbing the Muslim resistance in Kashmir in the back under the banner of “ending cross border terrorism” and restricting us to frustrating, token, tit-for-tat responses in the face of ever increasing Indian aggression on our eastern borders, under the banner of “restraint.”

And now through alliance with the United States under General Bajwa, Pakistan is herded towards US sponsored talks with India, to bury forever any hope of a fully liberated Kashmir being unified with Pakistan. This American ploy is to grant India a victory through the maze of diplomatic talks that it could never secure for itself on the battlefield. As for the “normalization” of relations, it is an American demand to permanently remove Pakistan as an obstacle to India as the dominant regional power, through a whole host of security concessions, including our falling on the sword of self-inflicted nuclear disarmament.

America is an open, hostile, Kaffir enemy of Muslims. Its enmity is apparent from its support of the Hindu State in the east and the Jewish State in the west. Its enmity is evident from its aggression in Afghanistan, Iraq and Syria. Its enmity is clear from its relentless bringing Pakistan to heel before India. Islam forbids alliance with the enemy forces who fight Muslims, occupies our lands and desires only our ruin, for Allah (swt) said,

“O you who believe do not take My enemy and your enemy as allies, meeting them with softness. Indeed, they disbelieve in that which has come to you of truth.”

Our armed forces are not only fully capable of ending alliance with Washington, the situation is ripe for it. Only under the Khilafah on the Method of Prophethood will our armed forces finally be mobilized for the liberation of Muslim Lands.

The Solution to Occupied Kashmir is its Liberation by the Khilafah

In a fresh ceasefire violation, Indian forces on 25 May 2017 resorted to firing at a time when a two-member United Nations team was on a visit to the Khanjar (Baghsar) sector of AJK’s southernmost Bhimber district. The vehicle was carrying Maj Emmanuel from the Philippines and Maj Mirko from Croatia of the UN Military Observer Group in India and Pakistan (UNMOGIP) when the Indian troops opened fire at around 2pm. “The Indian [army] post committed ceasefire violation, targeting UNMOGIP vehicle moving along the LoC in Khanjar sector,” the ISPR said in a statement.

As always the actions of the Indians are within the broad guidelines given to them by their colonialist supervisor, the Trump administration. Such flare-ups over the Line of Control build a case for making it a firmer border, enforcing the status quo. The American plan for Kashmir is now becoming obvious to those who follow such events closely. This is likely be based on some kind of formula to consolidate the status quo over Kashmir, including the firming of the Line Control, alongside the partitioning of Jammu and Kashmir that would give greater independence or greater autonomy to the valley, at the expense of Pakistan waiving its rights to the Jammu and Ladakh regions. In any variation of the settlement the US is seeking the establishment of military bases in South Asia for the containment of China and the strategically placed Kashmir seems to be a probable contender. This plan provides the fastest route to a settlement of the Kashmir issue, but it is nothing short of a complete betrayal of the tens of thousands of Muslims of Kashmir, who lost their lives under the brutal occupation of Kafir Hindu forces, and a complete betrayal of the thousands of Mujahideen, who sacrificed their blood in 1948, 1965, and in the decade long Kashmiri uprising that culminated in Kargil in 1999, which was to rid Kashmir of its oppressive Kafir rulers.

The correct solution to the Kashmir problem is not to give a part of Kashmir to India, but to liberate all of it from the rule of the Hindu kafir; instead of aiding the ‘divide and rule policy’ of the Kuffar, Muslims should work towards re-unifying all Muslim lands under a single leadership. Allah orders us to fight those disbelievers who fight us

“O ye who believe! Fight the Unbelievers who gird you about, and let them find firmness in you: and know that Allah is with those who fear Him.”

Contrary to the atmosphere of resignation to the US conspiracy, that is being generated by the Bajwa-Nawaz regime, Pakistan’s armed forces are not too weak to fight the cowardly Hindus, who were present in their hundreds of thousands in the Kashmir valley, but were unable to dispose of a few thousand Mujahideen. The Pakistan Army is like the lion who has been told that it cannot confront even the smallest of creatures. Just one strike of its limb, upon the command of a Khaleefah Rashid, will make clear to the world the strength of the Muslim Ummah over all the other nations of the world.