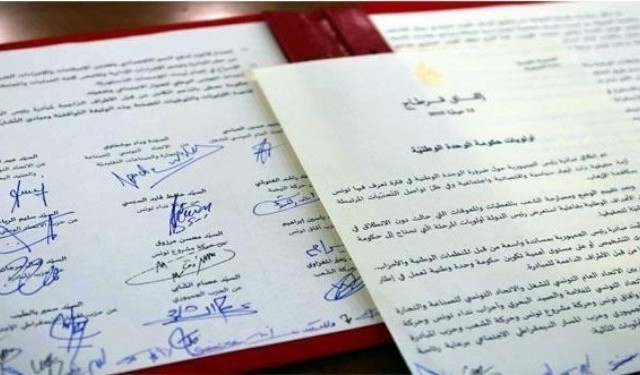 After the nationwide boycott of the municipal elections, and after most parties and trade unions signed the Carthage Document agreeing on a broad change of the government, including its president, it was announced on Monday 28/5/2018 the suspension of negotiations on that document and keeping Youssef Chahed as prime minister for the forthcoming period.

In spite of all the attempts to show the decision as sovereign and derived from the personal will of the Head of State, the observer of the intervention of the colonial powers’ ambassadors in the internal affairs is aware that they are behind the resolution of the controversy over the Carthage 2 Document; not the artificial disagreement between the Al-Nahda movement and other parties, which is just a mere exchange of roles for local media consumption.

Keeping the former US embassy official as foreign minister despite all the catastrophic consequences he has sustained is yet another proof that those who furnish the governance scene do not understand any sense of leadership and that their job presence is linked to the implementation of external dictates set out for domestic and foreign policy, issued by the European Union or experts of International Monetary Fund.

We in Hizb ut Tahrir / Wilayah Tunisia confirm that what is happening is the distraction of public opinion with the issue of the prime minister’s permanence, and to ignore the millions of Tunisians who boycotted the recent elections because they do not trust this political system that is steeped in corruption, employment and serving colonial interests at the expense of the nation.

We say to our people:

The main issue for the nation in Tunisia is not the change of people but the liberation of the country from all kinds of colonialism and subordination and the establishment of a political system that guarantees the nation’s rights and protects their dignity with the rulings of Islam under the shade of a Khilafah (Caliphate) on the method of Prophethood.