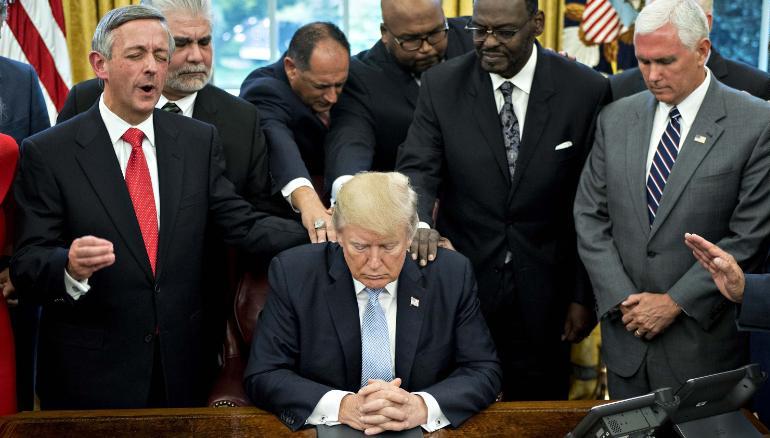 Americans are divided, and on the first anniversary of Donald Trump’s presidency, the US government was officially shutdown because of failure to agree a new budget with Congress, which means that 750,000 government employees will stay at home without pay. Trump called himself the great dealmaker, who would ‘make America great again’, and now after his first year in government it is time to judge what he achieved.

Representative Linda Sanchez’s judgment was: “They have proven that they are incapable of the most basic functions of government such as keeping the lights on … How can we trust them to face the many challenges our country faces?” Trump tweeted: “This is the One Year Anniversary of my Presidency and the Democrats wanted to give me a nice present”. Democrats blamed Trump, and Trump blamed them!

Trump’s racist language offended blacks, Latin Americans, Mexicans, and Native Americans but Muslims were also a target of his administration, which imposed travel bans preventing Muslims from various countries from entering the US. Huge demonstrations against him, on the day of his inauguration and afterwards, led to violence and loss of life. Scandals and insults surrounded him from all sides, and most Americans do not believe what he says. Trump attacked anyone who opposed him, and undermined his own country’s judiciary, intelligence services and the media. He also humiliated and undermined members of his own Republican Party and his staff and cabinet members on many occasions, while dozens of medical practitioners openly question his mental health.

Nevertheless, he delivered results on some of his campaign promises, such as withdrawing from the Trans Pacific Partnership, the Paris Climate Accords and securing a massive tax cut for US corporations. Trump’s withdrawal from international agreements may ultimately harm US leadership in an increasingly multi-polar world. China is expanding its economic and political influence as the US declines in moral leadership of the so-called free world in favor of what Trump called: ‘Putting America First”. The US has always put America first, but Trump has unmasked the US by casting aside an international world order regulated by international institutions and principles such as the United Nations. Previous presidents have done that at times, but none with as much arrogance as Trump; US allies and enemies have been exposed equally to his crude and threatening rhetoric.

The statesmen of the world judge based on political realities more than rhetoric, but as Trump appeases those who vote for him, so too other leaders around the world cannot be free from the constraints of public opinion that is resentful of US arrogance. Trump raised tensions over North Korea to frighten China, and yet China continued to grow economically and politically, while North Korea managed to make significant progress in its missile and nuclear capabilities. Trump threatened other countries with violence including Mexico, Venezuela and Iran, but none collapsed to his threats as totally as some of the subservient rulers of the Arab world did.

During Trump’s visit to Saudi Arabia in May, a huge deal worth $380 billion was publicized. White House economic adviser Gary Cohn, said at the end of Trump’s trip: “The president was able to make some of the most amazing deals that have really been made by an administration ever.” The sums of money involved would bankrupt Saudi Arabia, which is already struggling to pay for the $112 billion in useless weapons agreed in 2012 under the Obama administration. Congress agreed to support the deal after guaranteeing that the Jewish entity would get more advanced weapons. Typical of Trump’s presidency, even this deal turned out to be a lie! The so-called deals were mostly non-binding memoranda of understanding. Nevertheless, Saudi Arabia has increased its services to the US and is purchasing new weapons to kill more Muslims in Yemen and join the Jewish entity in unspecified initiatives that promise to waste more Muslim blood and resources in a manufactured conflict with Iran. Finally, there is the so-called “deal of the century” which includes Trump’s recognition of Jerusalem as the eternal capital of the Jewish state and deeper humiliation of the Palestinian Authority.

After one year in office, Trump has divided his own country, alienated US allies, failed to stop Chinese influence in the world, weakened international institutions that the US previously relied upon, and tightened the noose around the necks of the subservient rulers of the Muslim countries. Trump has unmasked US hegemony, and by so doing brings closer its end.