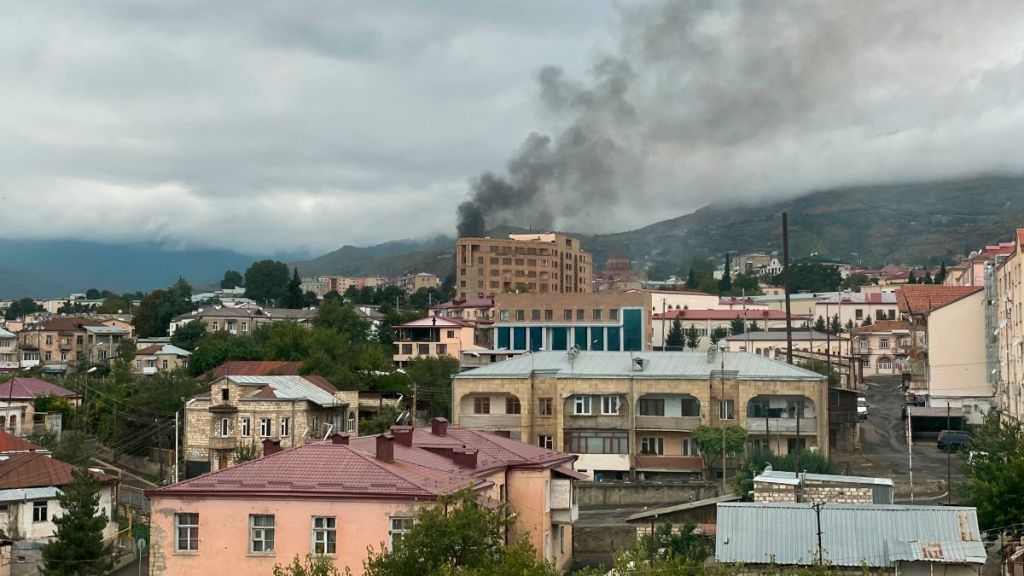 In leading news this week, the longstanding conflict in the south Caucasus escalated into armed warfare between Azerbaijan and Armenia over lands occupied by Armenian forces in Nagorno-Karabakh. This local conflict has a regional and international aspect also, with Russia supporting Armenia and Turkey supporting Azerbaijan with, inevitably, the United States covertly standing behind Turkey. Despite denials, there are reports that the latest escalation was provoked by Turkey, which is said to have last month transferred a group of 150 Syrian fighters via Turkey into Azerbaijan. According to al-Monitor, ‘The fighters were allegedly taken to training camps on two islands in the Caspian Sea for tactical training and told that their job would be to defend Azeri gas facilities’.

No doubt there are many who will assume Erdogan’s actions are in support of the Muslim cause but the reality is that Erdogan only serves his American master. Like other Muslim rulers, Erdogan is not concerned with solving problems but with exploiting them for his own interests and those of his master, in the process becoming an expert in betrayal. Erdogan entered Syria claiming to support the revolution but in fact he only betrayed it. Then Erdogan entered Libya, claiming to support the Tripoli government but has occupied almost half the country himself and locked benefits for Turkey in the eastern Mediterranean, while the Tripoli government is left suffering the resignation of its prime minister. And in Azerbaijan, despite all Erdogan’s rhetoric, he has done nothing to resolve the situation but instead wishes to maintain antagonism between the two countries in order to provide him with leverage in the region and against Russia.

What is particularly heart breaking is that Erdogan does all this not even for some misguided sense of loyalty to the Turkish people but he actually does this only for America. Fearful of entering Muslim lands herself after the horrors of Afghanistan and Iraq and preoccupied with the threat of an ascendant China, America has resorting to building Muslim regional powers in order to carry out its evil work. The American Muslim Empire is built on a careful balancing of leading Muslim powers against each other, while tightly ensuring that all Muslim regimes fully suppress calls for the implementation of Islam and instead continue to fully safeguard the Western secular way of life in Muslim lands. With Allah’s permission, the conspiracies of the imperialist Western disbeliever will soon fail and the Muslim Ummah will arise to retake control of its own affairs by appointing a general leadership that shall unify all Muslim lands, liberate all occupied territories, re-establish the Islamic way of life and carry the call for Islam to the entire world.

The influence of the foreign Western disbelievers extends beyond the present Muslim rulers to the Muslim political medium in general, where Britain, the world’s leading power before America, continues to have influence. On Wednesday, 30 September, in a joint press conference in Khartoum, the Ummah Party, the Sudan Liberation Movement, and the Eastern Front called on Abdel Fattah al-Burhan, chairman of the Transitional Sovereign Council, to accept the US offer to normalise relations with the illegal Jewish Crusader entity. According to Anadolu, Mubarak al-Fadel, head of the Ummah Party, said, “The American proposal is limited to the upcoming US presidential elections, we shouldn’t miss this historic opportunity”.

It is astonishing to see the leader of a party that claims to be Islamic calling for such a thing. This is indeed an historic opportunity, not for Muslims but for Western powers who wish to see the alien entity fully absorbed into Muslim lands to provide a physical entry point not only for them but also for their culture and lifestyle. The latest round of recognitions has of course been pushed by the Trump administration in advance of the November presidential elections really as a consolation prize after the failure of the Kushner peace plan. However, Britain has also become actively involved in pushing its agents for normalisation not only because of general Western ideological concerns but also to try to trap American-backed rulers into recklessly normalising in opposition to formidable Muslim public opinion. Despite the lead of small British-backed regimes such as the UAE, none of the remaining major Muslim countries at this time has yet dared to take such a step. America did send US Secretary of State Pompeo to persuade Sudan to normalise but America, also fearful of its tenuous control over Muslim lands, has not forced al-Burhan to actually move ahead with this.

For Muslims to fully regain control over their affairs they must not only replace their rulers but also purify their political medium in general. It is incumbent upon those with sincerity and ability to engage in politics under its true meaning of caring for the affairs of the people, thus exposing and displacing the insincere and the incompetent from their positions as political leaders in Muslim lands.

In a speech on Friday 2 October 2020, Macron announced measures to limit the influence of Islam and develop an “Islam of France” that would be compatible with Western and French values. These measures include controlling home-schooling, scrutinising religious schools and making associations soliciting public funds sign a “charter” on secularism. According to The New York Times, Macron said, “What we must attack is Islamist separatism”, calling Islam both an ideology and a project that sought to indoctrinate children, undermine France’s values and create a “counter-society” that sometimes laid the groundwork for Islamist terrorism.

Just as the illegal Jewish entity implanted in Muslim lands is following the path of the Christian Crusader entity that preceded it, the polices of Western countries faced with large Muslim populations are following the path of the Spanish kings that brutally suppressed the Muslim population of Andalus. The end of the population was only to flee to Muslim lands or to face forced conversion to Christianity, though even then those who converted continued to face persecution as suspected secret Muslims.

The Muslim Ummah must re-establish the righteous Islamic Khilafah (Caliphate) State on the path of the Prophet ﷺ, not only for those living in Muslim lands but also to support Muslims in the West and other non-Muslim countries. Due to its size, geography, population, resources, and ideology, the re-established Khilafah State shall from its inception enter the ranks of the great powers and position itself as a global protector of Muslims and defender of Islam. The Prophet ﷺ said, «إِنَّمَا الْإِمَامُ جُنَّةٌ يُقَاتَلُ مِنْ وَرَائِهِ وَيُتَّقَى بِهِ» “Indeed, the Khalifah is a shield, from behind whom you fight and by whom you are protected”.