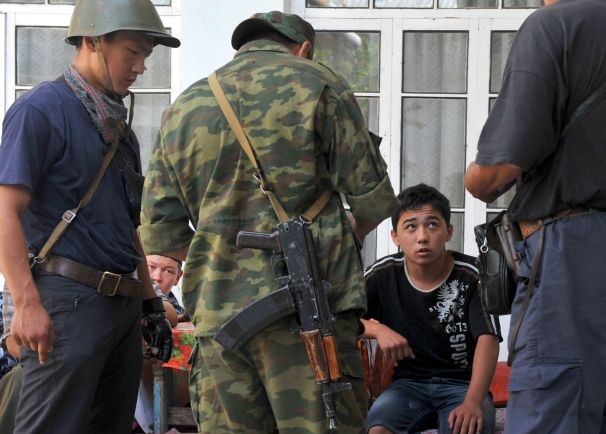 On May 18th, Information Agency Present Time published a reportage entitled “Like whom and how people being recruited into radical Islamic Party of Liberation in Kyrgyzstan?” The report states: “The peasant women, tradeswoman, ordinary housewives: at the Radical Party “Hizb ut-Tahrir” are increasingly women. Persuading them to give up their ideas is not easier than men, and on this working is a special Interior Ministry department, whose employees compare themselves with the preachers.“

In recent times, Kyrgyz authorities have stepped up their fight against the brothers and sisters of Hizb ut Tahrir. If before this fight was manifested in the physical plane, in the form of persecution at school, at work, fabrication of criminal cases, searches and arrests, today they are actively working on the discussion with brothers and sisters from the ideas of Hizb with the help of corrupt imams and police who are trying to dissuade Shabab from Hizb’s ideas. The corrupt imams in the service of secular authorities conduct lectures and seminars which are educating employees of special services to fight against Hizb ut Tahrir. So for example on 1st May The Fund “Iman” and the Institute of the National Security Committee of Kyrgyzstan named after Anarbek Bakaev conducted extension courses for the staff of the National Security Committee from all regions of the country.

The lectures under headline “The main religious trends, prevention of radicalism with the help of Islam and science arguments” was read by eminent scientists and theologians, among them the director of the analytical center, Religion, Law and Politics, Kadyr Malikov, a member of the Ulema Council Chubak Azhy Zhalilov, youth work specialist in the department Daavat SAMK Daniyar Muradilov, a leading Specialist SCRA Denis Pyshkin, department head of the theological faculty of the Osh State University Zaylabidin Azhimamatov, a teacher of the Kyrgyz-Russian Slavic University Vladimir Shcolniy and the head of the Department of Theology of the Kyrgyz-Turkish University (Manas) Bakyt Murzaraimov.

Authorities have also used public, private, central and regional mass media to spread lies against Hizb ut Tahrir. This reportage one of these orders of special services of Kyrgyzstan. In the reportage are involved the staff of 10th department of the Ministry of Interior, who are actively fighting against Islam and Muslims in Kyrgyzstan. Everybody is aware of the cases of how the staff of the 10th department encroach on honor, dignity and property of the country’s Muslims by breaking in their home for searches under the cover of night, without shame or conscience offending homeowners. There have also been cases of how they beat homeowners in front of young children by holding them at gunpoint and threatening them with violence.

Today, these officers of the 10th department are studying verses and hadiths, trying to dissuade the brothers and sisters of Hizb from their work for the revival of the righteous Khilafah state. One of the policemen in the report complains about the fact that both men and women do not abandon their ideas:

“We made a formal proposal, by saying that they will be shown on TV. But convince them to give up their ideas is very difficult. There were times when hizbiys were renounced from their parents when they tried to dissuade them.”

Authorities teach special services the ayat and ahadith, not in order to understand the truth, not to get their blessings, not in order to be healed from the darkness of ignorance but to distort the truth and to fight against carriers of appeal! How humbled is this government in their ignorance! As far as this authority-turn away from the truth!!! Distanced himself from Allah and His messenger, driving people to separate religion from life, pursuing calling Muslims to Islam, arresting and forcing to give up the truth, this government contrive!!! However, Allah سبحانه وتعالى says in His Noble Book:

“When the disbelievers plotted against you, to imprison you, or kill you, or expel you. They planned, and Allah planned, but Allah is the Best of planners.”