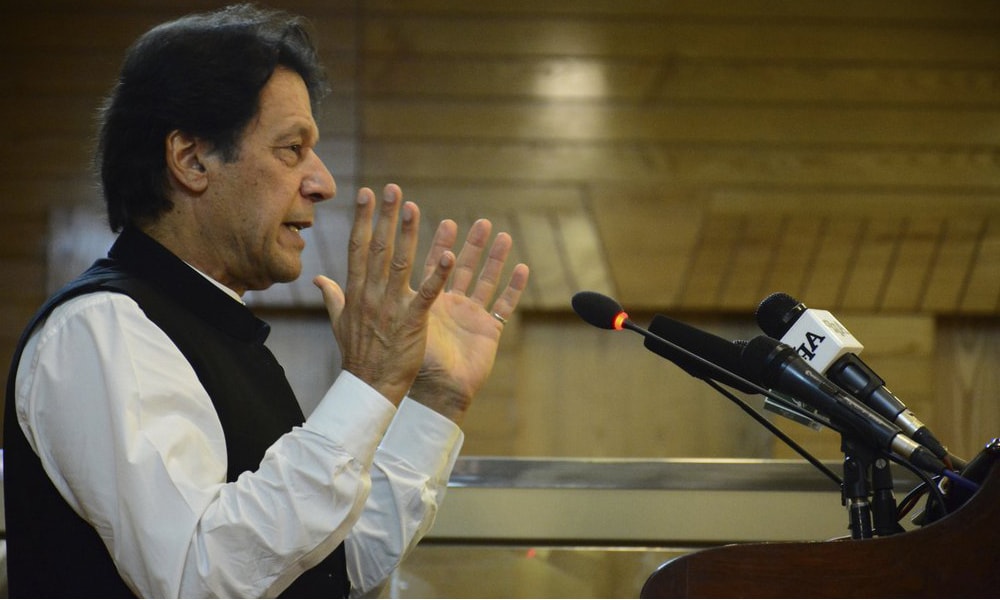 Khan’s speech on Independence Day was full of colorful metaphors but short on action. Both the people of Pakistan and Khashmir wanted to hear about Khan’s plan to liberate Kashmir, the jugular vein of Pakistan; instead, they got an earful about the dangers of Modi’s extremist ideology and a possible Indian attack.

The world is well acquainted with Modi’s crimes against Muslims in India and the venom spewed out from his BJP cadres. The destruction of the Babri Masjid, Gujarat massacres, mass incarceration of the people of Kashmir and almost daily lynching of Indian Muslims are the bloody emblems of Modi’s racist ideology and need no reminders.

The people of Kashmir do not need Khan to serve as their global ambassador highlighting their plight to the rest of the world. Kashmiris and Pakistanis want Khan to declare Jihad and liberate occupied Kashmir from the fanatic Hindus, and permanently reconnect Pakistan’s jugular vein with Jammu and Kashmir. However, Khan is determined to play the role of a storyteller making frivolous comparisons between Modi and Hitler, but not lifting a finger to unshackle Kashmir from Hindu oppression.

This is odd coming from Khan, a student of politics at Oxford. Surely, one of the great lessons he must have learnt is that Modi, like Hitler, must be stopped immediately by force and not given the space to spread his vitriol. Yet Khan is content to express solidarity with Kashmir only in words confined to global forums. Khan said. “We will go to United Nations…We will go to every global forum…We will go to the International court of justice…” But Khan will not go to Jammu and Kashmir with his army as liberators!

Khan rather wants to limit his actions in calling for Kashmiris to decide their own future. Khan said, “We will constantly hammer the narrative of Kashmir’s right to self-determination.” Does Khan not realise that the world has deliberately ignored Kashmiri self-determination for several decades? Does Khan not see with his eyes that the Jews, Hindus and the crusader Americans have formed an alliance to oppress Muslims in Palestine and Kashmir and the world is powerless to stop them?

Yet, Khan continues to implore Trump to intervene hoping that the US President will echo the self-determination narrative and force India to reverse its annexation. The US has already stated that the annexation of Kashmir is an internal matter, but Khan’s delusions continue unabated. Khan is a liar and he moves his sweet tongue to coax Pakistanis and Kashmiris into accepting no jihad for Kashmir. Allah (swt) says:

“There is the type of man whose speech about this world’s life May dazzle thee, and he calls Allah to witness about what is in his heart; yet is he the most contentious of enemies.”
[TMQ: Al Baqarah: 204]

Undeterred, Khan is re-defining new red lines. Khan wants the people of Pakistan to forget that Kashmir is Pakistan’s jugular vein, which demands liberation. In his speech Khan described these new red lines when he said, “Pakistan is fully ready; our army, our people are on one page. We have decided we will not tolerate any violation and are fully ready to counter it.” Now, Khan wants the people of Pakistan to focus on violations of Pakistani territory involving only Azad Kashmir only.

Thus, Khan is moving the red lines (The whole of Kashmir is Pakistan’s jugular vein) from an offensive posture to a defensive position (only defend Azad Kashmir). By doing so, Khan has abandoned the the people of Kashmir in Indian occupied Kashmir and he has violated the command of Allah.

“And fight them on until there is no more tumult or oppression, and there prevail justice and faith in Allah altogether and everywhere; but if they cease, verily Allah doth see all that they do.”
[TMQ: Al Anfal: 38].

Ostensibly, Khan’s cowardly actions will not only embolden India but also set the stage for hardening the LoC into a permanent border. After spilling so much blood to keep the Kashmir issue alive, Khan acting under the auspices of the army leadership is about to sacrifice Kashmir to the Hindu extremists for good. Hence, the duty now falls upon the Muslims of Pakistan to actively resist Khan and encourage the Pakistani army to liberate occupied Kashmir and unite it with Azad Kashmir.

“Oh you who have believed, respond to Allah and to the Messenger when he calls you to that which gives you life.”
[TMQ: Al Anfal: 24]