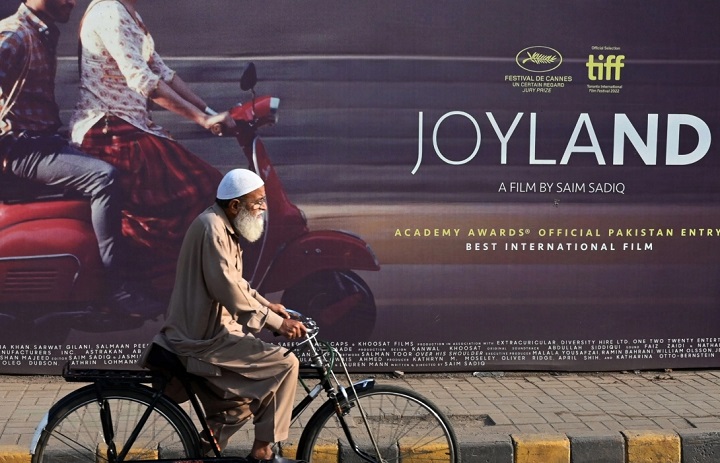 Among the many other controversies, a new one has engulfed our country regarding the upcoming movie, Joyland[1] and its disputed ban[2]. The movie, before its official release, has already bagged 4 major awards, among them the ‘prestigious’ Cannes Film Festival award in two categories, among them the Queer Palm category given to LGBT relevant content[3] and the much acclaimed jury prize[4]. The movie is also Pakistan’s official entry to the Oscar Awards[5]. It boasts Malala Yousafzai, the Nobel Peace Prize laureate as its executive producer[6] and the US-based Indian film-maker Apoorva Guru Charan as its main producer, who proudly claims “I think this is the first Pakistani film that has all American financing”[7]. Those in favor of the screening of the film argue that it’s based on our society’s reality and hence we shouldn’t shy away from presenting it. Those against its airing resort to the argument that it will spread vice in society as even though it’s depicting reality, the reality in itself is something that is Islamically impermissible and socially unacceptable.

At the core of the debate actually lies a more fundamental question, whether people should be free to express their opinions and views regardless of the societal consequences. Even more fundamentally, is there any society that allows such unrestricted speech, in the name of freedom of expression, or is that just a myth that liberal secularist societies and governments want others to believe? In reality, all societies, whether traditional or liberal have their red lines, however, the latter have managed to give the impression that they are absolutely free when it comes to speech and expression. Debunking this myth isn’t that difficult when one considers all the different terminologies liberal societies have introduced to actually restrict freedom of expression. ‘Fake news’, ‘libel’, ‘sedition’, ‘incitement’, ‘misinformation’, ‘hate speech[8]’, ‘fact check[9]’, ‘publication bias[10] ‘cancel culture[11]’, ‘no platforming[12]’, ‘birdwatch[13]’, and the more formal and legal term ‘proportionality test[14]’ are all different forms and tools for restricting free speech. There is a ton of evidence that even the most liberal societies are selectively restrictive when it comes to freedom of expression.

What then is the moral justification of liberal-minded people in objecting to the banning of a movie which is full of indecent content? It exaltingly displays extra-marital relations in a same-sex setting, all in the guise of bringing the plight of transgenders to the fore. Is there no decent way to raise awareness about the sufferings of the intersex community? Now that the wind from the freedom of expression argument’s sails has been taken out, let’s move on to some other arguments that are brought in favor of screening such irreconcilable content.

1. People learn important lessons: One of the loudest arguments is that movies and dramas educate people. Though this might be partly true, in all honesty, is this an effective and controlled way of educating the masses? Can we assess the damage it will incur by polluting millions of innocent minds who would have never thought about such acts and now might be fantasizing about them? Aren’t we as a society still struggling with the negative effects dramas have had on our family system?[15]

2. News media also report such or even worse incidents: Well newspapers report incidents but mostly without attaching feelings to them. Moreover, such incidents are most reported in news in the same light as society views them. So to date, extramarital affairs are not reported in a positive light, except for their portrayal in movies and dramas. This also shows how mass media other than news channels work towards changing morality and constructing acceptance for otherwise frowned-upon actions and concepts.

3. You are free not to watch: This argument is actually covered in the reasons given above for banning such content in the first place. Though we are free at an individual level not to watch such content if we dislike or disagree with it, it’s a moral imperative for us to stop others from spreading concepts that Islam views as devious and punishable.

4. Why is Islam endangered by just a movie? Again, this too is covered in the discussion above. It’s actually not a threat to Islam, rather it does endanger Muslims and society at large, by spreading vulgarity and building acceptance for such immoral and illegal behavior. Moreover, even if there was no danger, it’s a principled issue. As a comparison, do secular liberal countries (36 countries[16] to be exact) which have banned the public display of Nazi symbols and/or denial of the holocaust feel threatened by meter symbols? Does that pose a serious threat to liberalism or is it a principled issue?

5. The better viewpoint will prevail: Some would argue that movies are a suitable platform for fighting out ideological differences. So whether or not extramarital affairs and a third gender should be promoted is for the audience to decide. If this would’ve been a sound argument there wouldn’t be a need for restricting speech by those who actually defend its freedom so vehemently. However, they are the fiercest in systematically curbing it. Why? Because even they understand that ideas that cross a certain line shouldn’t be allowed to be promoted. Islam is clean from such hypocrisy in the first place as it never advocates free speech only to restrict it later. Regarding debating these issues, yes there should be such debates but movies are not the right platform for this as their appeal is more to emotions than intellect. Moreover, the uninformed consumers of movies aren’t shown both sides of the coin, mostly leaving them biased in favor of the movie-maker’s agenda.

6. What’s wrong with speaking up for LGBTQI rights? This is perhaps the most appealing argument as it involves compassion. Even though the misery of the Intersex community is undeniable we need to understand how Islam views and deals with this issue. Islam differentiates between transgenders and intersex people. The three separate phenomena to understand are gender identity, gender expression, and biological gender. Gender identity refers to a person’s internal sense of being male, female or something else; gender expression refers to the way a person communicates gender identity to others through behavior, clothing, hairstyles, etc. Biological gender refers to a person’s status as female, male, or intersex depending on their chromosomes, reproductive organs, and other characteristics According to clear Shariah’ evidences, the first two categories, where the person’s perception[17] or expression[18] is contrary to their biological gender, are absolutely unacceptable and prohibited in Islam. We humans are not free to choose our gender based on what we feel or like, rather this is something determined purely based on the biological reality. In either case, if the gender identity or gender expression is nonconforming to the biological gender, these are termed as transmale (mutarajallah) and transfemale (mukhanas). For those rare cases where the biological gender is ambiguous, generally known as intersex (khunsa), they are assigned a gender, either male or female, with the help of experts. They are also assisted with surgical procedures if required. Similarly, the only acceptable sexual orientation is between opposite genders, obviously only within the bounds of a Nikah. Now as per Islamic law, there can’t be a third gender and gender isn’t something fluid that can transcend the boundaries of your biological reality, therefore transgender people, i.e. those who don’t conform to their biological gender, are seen as homosexuals by Islam when they express their sexuality with the opposite sex based on their perceived identity. Therefore, the content of this movie is characterized as homosexual as well and therefore even more objectionable and disgusting from the Islamic and cultural perspective.

7. But the sensor board has cleared it! Another weak but common argument is that once a movie gets a clean chit from the censor board, we shouldn’t have any objection. The argument should be reversed and it should be asked what validity does the sensor board hold if it clears such a movie in our country? Or going even further, what about all the movies and dramas that are filled with violence, promiscuity, and every other possible vice humans can think of, in the name of mirroring society? The Central Board of Film Censors, established under the Motion Pictures Ordinance, 1979[19] explicitly states as its first “Principles of guidance in certifying films” that “A film shall not be certified for public exhibition if, in the opinion of the Board, the film or any part thereof is prejudicial to the glory of Islam or the integrity, security or defence of Pakistan or any part thereof, friendly relations with foreign States, public order, decency or morality or amounts to the commission of, or incitement to, an offence.” It should be clear that within secular democracies like ours, such laws are only lipservice in front of the hugely powerful western agenda which is seldom without financing.

On a final note, yes we understand that we cannot limit all sorts of information and therefore the first and foremost line of defense remains one’s own morals, values, and beliefs, however, this can never become a justification for spreading such indecent content unbridled in society. Together with the ahkam of protecting ourselves and our children from hellfire[20], the ahkam to forbid the evil (nahi anil munkar)[21] are also very well-established and irrefutable. This highlights the importance and some of the challenges of parenting.

To conclude, it must be pointed out that the sensitivities around this issue are quite pronounced among the community in general where except for a few ultra-modernists among us, people are mostly disgusted by the theme of the movie which revolves around sexual rebellion and homosexuality. We, therefore, see a public backlash on this issue however many other important issues escape such public scrutiny. For instance, why is it that despite being called an Islamic republic, all kinds of violations of Quran and Sunnah are taking place under the auspices of various governmental bodies, be it widespread interest (riba), foreign interference, unjust taxation, promiscuity or many other such ills? May Allah (swt) protect us from all evils and enable us to fulfill our duties as parents and members of society.