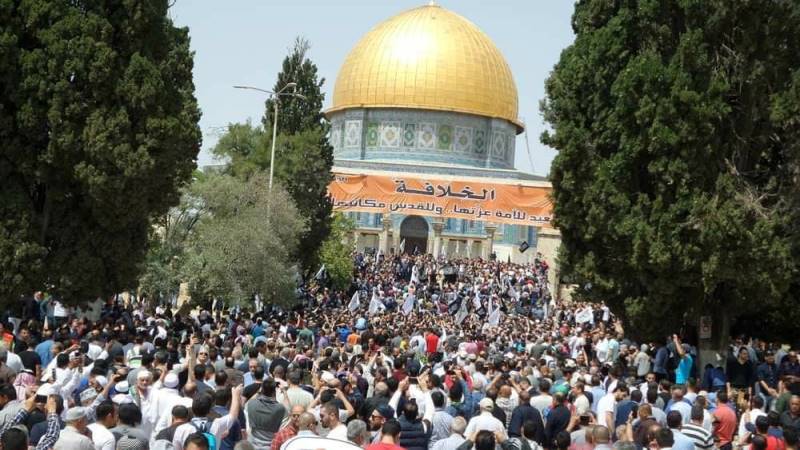 This week can for some be conceived as just another ordinary week, however it definitely is not. In this week there are two days which marked a turning point in the history of Islam, on 27th of Rajab the miraculous Isra and Miraj and on the 28th the fall of the Khilafah.

Isra and Miraj was the ultimate reward of Allah (swt) to His Prophet ﷺ after a period of tremendous hardship he faced in conveying the dawah of Islam. The Prophet ﷺ took a night journey from al Masjid al Haram to Masjid al Aqsa and ascended to the heavens by His Might. His patience, steadfastness and dedication was rewarded with meeting The Only One Creator. This was to sooth his sorrow and grief but it was also a crystal clear sign of Allah (swt) that after hardship ease will come. And that after weakness and oppression His Help and victory will definitely come.

It was no coincidence that one of the things the Prophet ﷺ brought us after his journey, was the latest part of Surah al Baqara, also known as Amanarrasulu, which is a supplication form which ends with the words أَنتَ مَوْلَانَا فَانصُرْنَا عَلَى الْقَوْمِ الْكَافِرِينَ   “And give us (as soon as possible) Your Victory over the people who do not believe.”

And as Allah (swt) assured, the tide turned in favour of Islam and the Muslims. The Prophet ﷺ was given help from an unexpected place which resulted in the establishment of an Islamic state in Medina and finally Mecca were Islam could be fully implemented. Now the belief, honour and safety of the Muslims could be realized and secured and the light of Islam could be spread to the rest of humanity. And it did.

Even after the Prophet ﷺ completed his duty and responsibility by conveying Islam to people and establishing Islam in the hearths, society and state. He left us his legacy, which is derived from the Quran and Sunnah and is build upon it; The Islamic State. The generations after him, took their responsibility of leading the Ummah as a successor of the Prophet ﷺ himself.

For centuries, one Khalifah came after another to rule by nothing than with Islam. But this came to an end on the 28th of Rajab which coincides with 4th of March 1924. This day the Islamic Khilafah system fell in Istanbul and systems of Kufr were established all across Islamic lands by the kafir occupiers and colonizers. The legacy the Prophet ﷺ left us behind, came to an end. The consecutive political succession of the Prophet ﷺ was no more.

This dramatic event caused far-reaching consequences for the position of Islam and the Ummah in the world. After a period of light and strength, the Muslim Ummah were submerged into darkness and weakness.

The slightest ignorance or negligence about this issue would not only be an insult for his Ummah who suffers daily due to absence of a Khilafah state, but also an insult for the legacy of the Prophet saw and all those millions who kept his legacy high for more than 13 centuries long.

Even though the exact date of Isra and Miraj is not definitive, the Muslim Ummah all across the globe takes the 27th of Rajab as the day of remembrance. It is by the qadaa of Allah (swt) that these two significant dates who had a big impact on the course of history, follow each other one after another. One day of hope, victory and authority and the other day of loss, defeat and weakness.

As if Allah (swt) wants us to remember that there is a delicate line between security and chaos, victory and defeat, authority and weakness. And that this delicate line is His Religion whereby the strength of our adherence to it makes us successful or makes us fail. And that hope, victory and authority which Allah (swt) gave to His Prophet ﷺ in Isra and Miraj is not impossible not is it far stretched, but it comes with a price. In order to gain this, we should be prepared to sacrifice as the Prophet ﷺ did and work as the Prophet ﷺ did to establish Islam and make it dominant till Allah (swt) is satisfied with us and gives His Help and Victory.