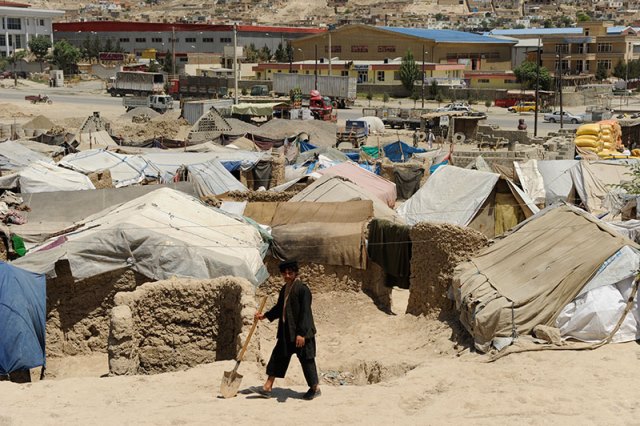 Look around at any of Afghanistan’s large cities – Kabul, Herat, Mazar-e Sharif, and Kandahar and it is easy to see that Afghanistan is facing an internal displacement crisis. Camps and settlements for Afghanistan’s 820,000 internally displaced people (IDPs); forced by conflict or natural disaster from their homes, sprawl out for miles on the city fringes, with thousands of new arrivals every week.

A new report by the Norwegian Refugee Council and Afghanistan has shed new light on the disproportionate risks Afghan displaced women and girls face and how, trapped in a cycle of inadequate assistance and growing impoverishment, they describe living in “prison-like”, deplorable conditions in Afghanistan’s urban IDP camps.

The so-called “National Unity Government” of Afghanistan for over six months now is busy in a tug of war between the two U.S. selected candidates, the presidents and CEO, to get the maximum for their own self and camp. Many Ministries are still vacant because of the internal rift and because each wants its own candidate to be the Minister. Moreover, the priority is given to the agenda dictated by the Obama administration, which was witnessed clearly in the recent U.S. visit of both Ghani and Abdullah. Despite tall claims both President and CEO failed to deliver the bare minimum so far to bring any betterment in the lives of the poor Afghans.

As per the above report, around one million Afghans are living in a disastrous situation, including women, children and the elderly. They have almost nothing to eat let alone other basic facilities. Most of them eat one meal per day. The number of IDPs that are mentioned in the report are from the major provinces, so one can imagine what would be the condition in the other provinces.

Indeed the elite that come to power through Democracy have their own agendas and schemes. They have no plan and desire for the wellbeing of their own people. Hence we see no mention of these IDPs in any of the speeches of these callous rulers. Indeed this is expected from secular Democracy and Capitalism which focuses all attention on the elite and a give and take relationship between them.

In order to resolve the dismal state of the IDPs and the Muslims of Afghanistan in general, Islam provides a comprehensive solution. Islam make it mandatory upon the head of state, the Caliph, to fulfill the basic needs of every citizen of the state, both Muslim and non-Muslim alike and to provide them with food, clothes and shelter. As well as provide them with healthcare and education. It is this system when applied humanity was living in harmony and tranquility. To attain what we deserve we must call for the system that is given to us by our Creator, Allah (swt). By re-establishing the Islamic Khilafah we could get rid of this dire situation that is caused by these corrupt rulers and their corrupt system, despite all the resources the Muslims of Afghanistan have at their disposal.