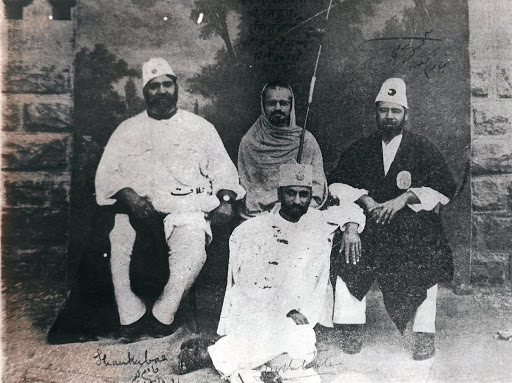 Inspired by Revelation (Wahee) from Allah (swt), through the Blessed Spirit, Gibraeel (as), the Messenger of Allah (saw) conveyed to his (saw) Ummah, «إِنَّمَا الْإِمَامُ جُنَّةٌ يُقَاتَلُ مِنْ وَرَائِهِ وَيُتَّقَى بِهِ» “Indeed, the Imam (Khaleefah) is a shield, from behind whom you fight and by whom you are protected.” (Muslim). Indeed the Imam of all Muslims is of central importance to our Deen. The Imam is the one who rules Muslims by all that Allah (swt) has revealed. He is the one Khaleefah who unifies all Muslims under a single Islamic authority. He is the one who is to be obeyed and he is the one who settles the difference of opinion by his order. So, what to speak of the loss of our shield, one hundred Hijri years ago, on 28 Rajab 1342 AH, corresponding to 3rd March 1924 CE? How did the Muslims of the Indian Subcontinent react to the events culminating in the destruction of the Khilafah?

When the Western colonialists raised their swords to slaughter the ailing Uthmani Khilafah (Ottoman Caliphate), the Muslims of the Indian Subcontinent mobilized in its defence, despite being under a brutal British occupation. After, the Italians attacked the Khilafah in Tripoli in September 1911, occupying Tripoli and Benghazi, there were public meetings all over the Indian Subcontinent calling for support of “our sacred Khaleefah the Sultan of Turkey against the most unrighteous and unjust war.” There were numerous demonstrations in October 1912, when the Balkan states attacked the Khilafah. The sincere poet, Allama Iqbal (may Allah (swt) have mercy on him), recited his poem “Jawab-e-Shikwa (Answer to the Complaint)” in the Bhadshahi Masjid of Lahore in November 1912 in order to raise funds for the Khilafah. Shaukat Ali and Muhammad Ali Johar from Utter Pradesh began efforts to mobilize the Muslims for support of the Khilafah, in the Tehreek e Khilafat (Khilafah Movement).

When the Western colonialists deployed the tool of Arab nationalism to strike at the Khilafah from the inside, the aware Muslims mobilized. After the Arab nationalist traitor, Sharif Hussain, fought the Uthmani Khilafah, in June 1916, demonstrations took place all over the Indian Subcontinent against his rebellion. On 26th June 1916, a resolution was passed in Lucknow condemning the “outrageous conduct” of Hussain. A year after the crusader General Allenby occupied the blessed lands of Masjid Al-Aqsa, ending the Khilafah’s authority there, a declaration was issued in December 1918, stating, “the fullest consideration should be paid to the requirements of the Islamic law with regard to the full and independent control of the Sultan of Turkey, Khalifa of the Prophet, over the holy places and over the Jaziratu’l-‘Arab (Arabian Peninsula) as delimited in Muslim books.”

After the Western colonialists occupied the capital of the Khilafah, Istanbul, the Muslims of the Indian Subcontinent remained restless. In February 1919, a fatwa was circulated which declared that the appointment of an Imam or Khaleefah was obligatory. On 21 September 1919, in a conference gathered in Lucknow, the Muslims declared that “the contemplated dismemberment of Turkey and the creation of a number of small states out of the component parts of the Turkish Empire with non-Muslim powers as mandatories is an intolerable interference with the Khilafat and will sow the seeds of permanent discontent in the Muslim world.” 17th October 1919 was declared as “Khilafat Day” to pray for the security of the Khilafah. Khilafat committees were established amongst Muslims and Khilafat conferences convened, funds were raised to save the Khilafah, a “Khilafat Rupee” was issued inscribed with translated verses of the Quran and a “Khilafat” journal was published.

Then when the British agent, the Turkish nationalist, Mustafa Kemal delivered the fatal blow and abolished the Khilafah on 3rd March 1924, the Muslims of the Indian Subcontinent were incensed. On 9th March 1924, Muslims convened to organize events for the retention of the Khilafah and issued a telegram warning that the abolition of the Khilafah “would open the door to the mischievous ambitions.” A circular was issued asking that the deposed Khaleefah’s name, Abdul-Majeed, must be mentioned in the Friday prayers.

The Tehreek-e Reshmi Rumal (Silken Handkerchief Movement) was launched, named as such because the letters exchanged between Shaikhul Hind and his colleagues, containing the outlines of a plan to recruit volunteers for an army, were written on a silk piece of cloth. To organize a military force, Maulana Ubaidullah Sindhi was sent to Afghanistan, Maulana Ansari to the tribes of the Frontier area and Maulana Husain Ahmad Madni set off to Hijaz in 1915 for support from the Uthmani Khilafah.

When the Western colonialists occupied Turkey, Muslims did not desist in their military efforts. The Fatwa circulated in February 1919 declared that Muslims must come to the aid of a Muslim country under attack from the kuffar. In May 1919, the Afghan Muslims suddenly launched an attack on the British, with leaflets being distributed in Utter Pradesh about Jihad against the kuffar, whilst in Punjab and Bengal leaflets were circulated about the prophecy of the return of the supremacy of Islam. From February to May 1921, the Muslims distributed a fatwa declaring service in the British army forbidden by Islam.

Indeed, the Muslims of the Indian Subcontinent strove to fulfil their obligation to defend the Khilafah. Indeed, they were right to predict the mischief that would result as the loss of our shield.

Since the destruction of the Khilafah of the Islamic Ummah, weakness, assault and exploitation has rained down upon us. Having incited rebellion on the basis of Arab and Turkish nationalism, weakening our state from inside until it collapsed, the British then carved the lands of Muslims as spoils into much smaller states, from the vast carcass of the former Khilafah. In the absence of our unifying Khilafah, the Western colonialists did not desist, carving up states from within states, such that we feel the full pain of the divide et impera (divide and conquer) policy of the Westerners. Despite our vast numbers, due to the absence of Islam as a way of life to strengthen us through Islamic unity, indeed the nations fall upon us, as we were warned by the Messenger of Allah (saw), «يُوشِكُ الأُمَمُ أنْ تَدَاعَى عَليْكُم كَمَا تَدَاعَى الأكَلَةُ إلَى قَصْعَتِهَا» “The nations will fall upon you, inviting others just like the guests invited to a meal.” They asked, “Will we be few in numbers on that day?” He (saw) replied, «بَلْ أنْتُمْ يَوْمَئِذٍ كَثِيرٌ، وَلَكِنّكُمْ غُثَاءُ كَغُثَاءِ السّيْلِ، وَلَيَنْزِعَنّ اللّهُ مِنْ صُدُورِ عَدُوكُمْ المَهَابَةَ مِنْكُمْ، وَلَيَقْذِفَنّ اللّهُ في قُلُوبِكُم الَوَهْنَ» “No you will be many, but you will be like the froth on the waters. Allah will remove fear of you from the hearts of your enemies and He will cast Wahan in your hearts.” They asked, “What is Wahan, O RasulAllah?” He (saw) replied, «حُبّ الدّنْيَا وَكَرَاهِيَةُ المَوْتِ» “Love of life and fear of death.” [Abu Daud].

After the destruction of the Islamic Khilafah state, the Western colonialists installed rulers over Muslims who ruled by other than all that Allah (swt) has revealed, through the systems of democracy, monarchy and dictatorship. Through the systems of misguidance, the colonialists had free hand to make sinful military alliances with Muslim states, inciting them to fight each other, whether between Iran and Iraq, or between Saudi Arabia and Yemen. This is whilst the current rulers either assist or consent to the real enemies of Muslims strengthening their occupation of Muslim Lands, whether in Palestine or Occupied Kashmir amongst many others. Moreover, the current rulers fight those Muslims who fight the enemies, denouncing them as “terrorists,” working hand in hand with the US crusaders, the Jewish entity and the Hindu State to crush any opposition to their occupations. Indeed, without an Imam ruling us by Islam we fell into what the Messenger of Allah (saw) warned us of, «لاَ تَرْجِعُوا بَعْدِي كُفَّارًا يَضْرِبُ بَعْضُكُمْ رِقَابَ بَعْضٍ» “Do not return to unbelief after me by striking the necks of one another.” [Muslim]

Through the systems of misguidance, the colonialists imposed interest based loans to plunge Muslim states into inescapable debt and impose economic conditions to cripple their industry and agriculture. Without the Khilafah to unify us, despite our vast lands, youthful population and resources being greater than most of the world’s major powers, we are drowned in poverty and humiliation due to rulers that do not rule by all that Allah (swt) has revealed. Allah (swt) said,

“Have you not seen those who have changed the Blessings of Allah into disbelief (by denying RasulAllah (saaw) and the Message of Islam), and caused their people to dwell in the house of destruction. Hell, in which they will burn, is an evil abode, indeed!” [Surah Ibraheem 14:28-29]

Indeed, the loss of the Ummah’s shield, the Khilafah, shook the Muslims of the Indian Subcontinent. So, one hundred Hijri years later, the loss of the Khilafah must spur the Muslims of the Indian Subcontinent to fulfil their obligation before Allah (swt) and His Messenger (saw) to restore it. Without doubt, the Muslims of the Indian Subcontinent, whether in Pakistan, Afghanistan, Bangladesh, India or Sri Lanka, are devoted to Islam. It is upon them all to strive ardently for the re-establishment of the Khilafah, seeking the dominance of Islam over all of the Indian Subcontinent as the Messenger of Allah (swt) gave glad tidings. The Messenger of Allah (saw) said, «عِصَابَتَانِ مِنْ أُمَّتِي أَحْرَزَهُمَا اللَّهُ مِنْ النَّارِ عِصَابَةٌ تَغْزُو الْهِنْدَ وَعِصَابَةٌ تَكُونُ مَعَ عِيسَى ابْنِ مَرْيَمَ عَلَيْهِمَا السَّلَام» “Two groups of my Ummah Allah has protected from the Hellfire: a group that will open India and a group that will be with ‘Isa ibnu Maryam.” [Ahmad, An-Nisa’i] Abu Hurayra (ra) narrated, «وَعَدَنَا رَسُولُ اللَّهِ صَلَّى اللَّهُ عَلَيْهِ وَسَلَّمَ غَزْوَةَ الْهِنْدِ فَإِنْ أَدْرَكْتُهَا أُنْفِقْ فِيهَا نَفْسِي وَمَالِي فَإِنْ أُقْتَلْ كُنْتُ مِنْ أَفْضَلِ الشُّهَدَاءِ وَإِنْ أَرْجِعْ فَأَنَا أَبُو هُرَيْرَةَ الْمُحَرَّرُ»  “The Messenger (saw) promised us the opening of India. If I was to come across that I will spend my soul and my wealth. If I am killed then I am among the best of martyrs, and if I return then I am Abu Hurayra the freed (from sin).” [Ahmad, An-Nisa’i, Al-Hakim].