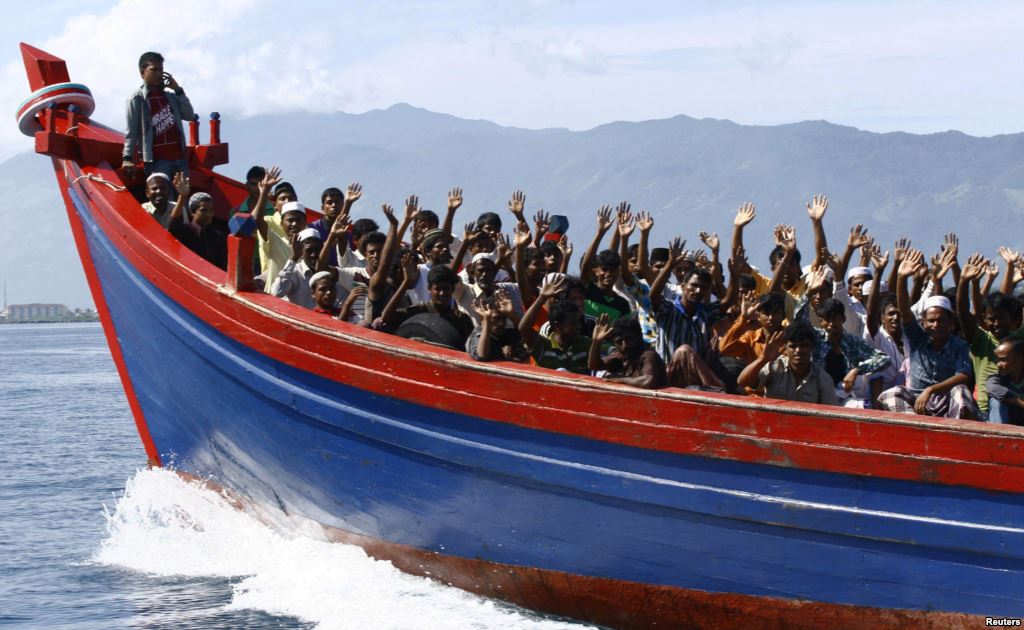 Bangladeshi authorities on Friday, 18th November 2016, prevented the Rohingya refugees, crammed into seven wooden boats, from ducking on the Bangladeshi side of the Naf River, which separates Bangladesh’s southeastern border from western Myanmar, said Nafiur Rahman, a local coast guard official, on Saturday. “They included 61 women and 36 children. We resisted them from entering our water territory,” he said, adding that all of them had been nationals of Myanmar, escaping an uptick of violent clashes in neighboring Myanmar’s Rakhine state. Rakhine, home to a large number of Rohingya Muslims, has been under a military lockdown since an alleged attack on the country’s border guards on October 9 left nine police officers dead. The government accused the Rohingya of being behind the assault. Since then, Bangladesh has heavily boosted security measures in a strip of land along its border with Myanmar and deployed hundreds of troops to patrol the area in a bid to push back the potential waves of Rohingya Muslim refugees, who flee the resurgence of violence and persecution back home. (Source: Press TV)

Few months back one wild Indian elephant was swept away by flood water all the way to Bangladesh and stranded in the flood hit area in the remote part of the country. This incident had received the highest level of media coverage in Bangladesh and the Bangladeshi government was swift to form a rescue team consisting of experts after the news had spread and had put great effort to save the life of that helpless wild beast. Of course the actions taken by the current Bangladeshi regime are praiseworthy and there is nothing wrong with it. But questions arise when the same authority and media turn a blind eye and remain silent to the desperate plea of the hundreds and thousands of persecuted Rohingya Muslims including men, women and children, who begged for shelter to the Bangladeshi authority to escape the barbaric torture of the Myanmar regime. Is the life of a wild beast is more sacred to Bangladeshi regime than the lives of thousands of Muslims?

In the UN Summit on Refugees and Migrants held on last September, Sheikh Hasina, PM of Bangladesh vowed to secure the rights of the refugees and migrants, saying, “the rights of the refugees and migrants had to be secured in all situations, irrespective of their status…” She also said, “Bangladesh is looking forward to work with Myanmar to find a permanent solution on the matter of refugees…” We want to ask Sheikh Hasina, what are the steps so far that she had taken when these helpless Muslims were gunned down by the Myanmar army using helicopter gunships? What did she do when Rohingya villages were burnt down by the merciless arson attacks and when the Rohingya Muslim women were brutally raped at gun point? What are the solutions her regime had proposed when these desperate Muslims had come to her door begging for shelter and hoping to get least amount of humanity? No, the merciless Hasina regime did not do anything but to push them back to the land of nightmare, leave them to their fate and increase border patrol guards to stop the influx!  Is this how she is securing “the rights of the refugees” who are coming at her doorsteps? Forget taking any physical steps to help or rescue those fateless Muslims, this despicable Hasina regime did not even utter any verbal condemnation against the cold-blooded murder and ruthless torture of the Myanmar army.

In June 2012, after few months of the violent crackdown on Rohingya Muslims by the Buddhist Military Junta, in an interview with Al-Jazeera, Sheikh Hasina said, “Rohingya fleeing violence in Myanmar is not our problem….” And it is evident that, the constant brutal persecution of the Rohingya Muslims is not at all any problem to the rulers of the Muslim world including Hasina, because they have failed to realize that the Muslim Ummah is like one body.  To Hasina, life and blood of a wild beast is more sacred than the lives of tens and thousands of Rohingya Muslims because she did not ever reflect on the famous Hadith of Rasulullah regarding a believer’s blood and property. According to the narration of `Abd Allah ibn `Amr ibn al-`As (ra) that he said:

“I saw the Messenger of Allah ﷺ performing tawaf around the Holy Ka`ba saying to it: ‘how pure and good you are!  How pure and good your fragrance is! How great and exalted you are! And how great and exalted your sanctity is! But by Him in Whose hand is Muhammad’s soul, the sanctity of a believer’s blood and property in the sight of Allah is greater than your sanctity!’“ [Targhib wa’ l-Tarhib of Imam al-Mundhiri, 3/276]

History is the witness that for more than one thousand years the blood, life and property of the Muslim Ummah were only protected by one single mighty state which was the Khilafah and unlike today’s unconcerned Muslim rulers, the Khulafa were the real guardians of this noble Ummah behind whom this Ummah used to fight and take refuge. Hence, this noble Ummah does not need these impotent rulers like Sheikh Hasina, El-Fattah Sisi, Erdogan, King Salman or Raheel-Nawaz who have failed to utter a verbal condemnation against the atrocity of the Burmese regime; rather this Ummah is eagerly waiting for a mighty Khalifah like Salahuddin Aiyubi, Sultan Mahmud, Mu’tasim Billah, who will break the torturous hands of the Myanmar regime and rescue our beloved Rohingya Muslim brothers and sisters from the atrocity of Buddhist regime.