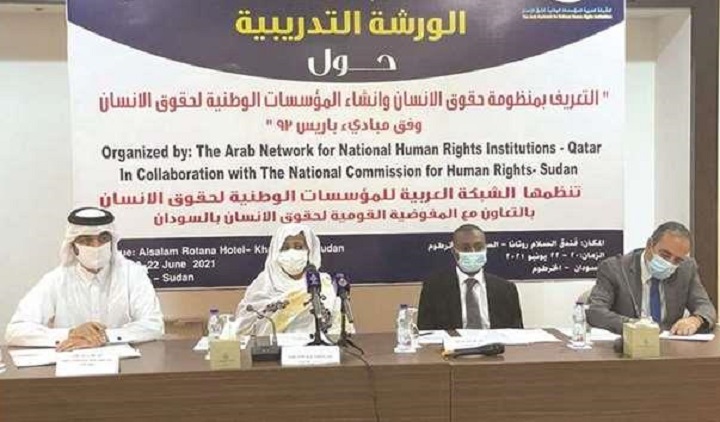 A member of the Steering Committee of the National Commission for Human Rights in Sudan, and a member of the Rapporteur of the Preparatory Committee for the training workshop to introduce the human rights system in accordance with the Paris Principles for the year 1993, Rashad Abdel Wahab, confirmed the completion of all arrangements for the launch of the training course today, Sunday, at the Salam Rotana Hotel, under the honor of the Sovereignty Council and some government and justice institutions. and civil society organisations. (Al-Muharrir: 20/06/2021).

Every day the Transitional Government unveils to us as it is dedicated to approving the Western principles in all areas of life. Are human rights principles worthy of attention at the level of the Sovereignty Council, whereas people are suffering from breakdown in all areas?! Human rights, that Western libel, is left with no popularity in Muslim countries, for it has been exposed and everyone has become aware that it is a new colonialism, and it is just a big lie, a glossy slogan and a loose term, used by paid tongues and used by the colonial countries as a pretext to interfere in the country’s affairs, plunder its wealth, and enslave its peoples, and in the end, people do not get even animal rights! Allah bless you.

The rulers of the Muslims and their media played a major role in marketing this term by obfuscating its truth with an aberration that made the murderer, the protector of human rights, and the murdered a terrorist extremist, an aggressor on “human rights”, as is the case in all occupied Muslim countries where pure Muslim blood is shed without these rulers blinking an eye and without a serious shift by the Western human rights theorists with their false organizations! And all the ploy of Western politicians is to cry over the Muslims who are being killed, expressing their “increasing concern” about violations of “human rights” in Palestine, Iraq, Afghanistan, Syria…etc. while they are the ones who trampled on human rights by supporting all those who fought Muslims, providing them with weapons, material support and creating wars designed according to their plan.

As for the so-called international organizations and bodies that claim independence and protection of human rights, how much they have called, met, decided and announced, to no avail, to dilute vital issues in which Muslims are slaughtered in a malicious and cunning manner in an international conflict in which they have nothing to do with it, claiming their eagerness for the alleged peace. On the land of Ash-Sham, the blood of nearly two hundred thousand martyrs, hundreds of thousands of wounded and detainees, and millions of displaced and exiled people were shed in the east and west of the earth, without the world that pays lip service to “human rights” moving a finger. Rather, Assad, the killer of children and women, was elected again and falsely won the highest 95%! And that is the case with all Muslim countries.

Talk by the West about human rights is refuted by the American death drones that bombard Muslims, without accountability or oversight, in Yemen, Pakistan, Afghanistan, Somalia, and before that Iraq, which Bush’s democracy and his country’s call for “human rights” have turned into killing, wounding, displacing and exiling millions of our innocent people. As for Guantánamo prison, it is an eternal slap to all those who pay lip service to human rights from the Kuffar and colonial West, and worse than that is that America gives itself the right to arrest and kill Muslims from their countries, under rulers who bow their heads to their masters and bully their people.

Human rights are just a glossy slogan to sow ash in the eyes, and their reality and those behind them have been exposed. The Ummah has surpassed all the enemies; the West and those who support it by falsifying the facts, and it is looking forward to its glory which will be restored by the Khilafah Rashidah (righteous Caliphate) State on the method of the Prophethood, soon with Allah’s permission.