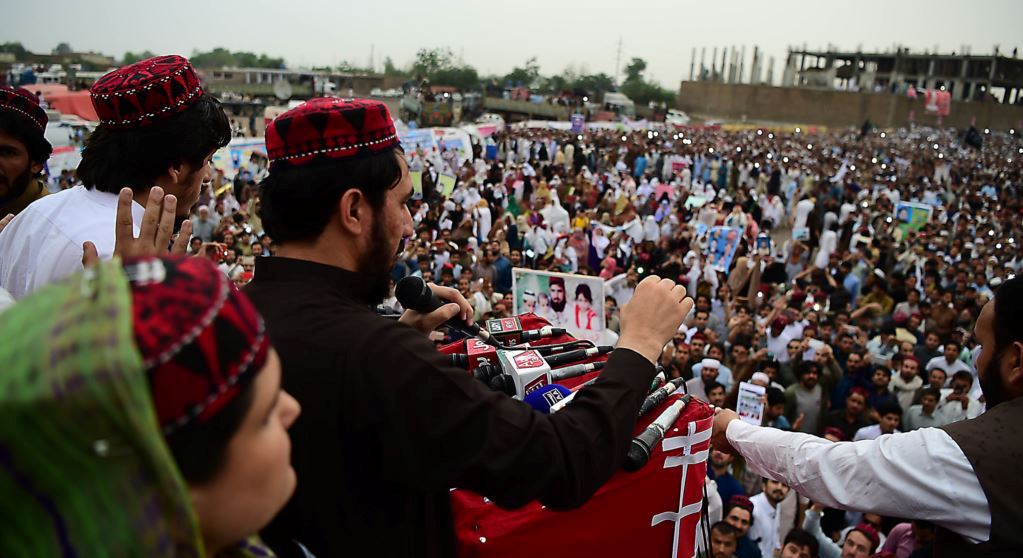 The simmering conflict between Pakistan’s armed forces and the Pashtun Protection Movement (PTM “Pashtun Protection Movement”) has intensified after the spilling of the pure Muslim blood, during the blessed month of Ramadhan on 26th May 2019, in North Waziristan in the Pashtun tribal regions. On the one hand, the armed forces and their intelligence are alarmed at the exploitation of the conflict by foreign powers. On the other hand, the Pashtun Muslims have been incited to join the conflict in large numbers, having suffered immensely since the US violated the region and instructed the rulers of Pakistan to crush the tribal Pashtun resistance to its occupation in Afghanistan.

Sacred Muslim blood was spilled in the sacred month of Ramadhan and the smouldering conflict was ignited into a fire. The spilled blood must prompt the breaking of swords, for it is blood that is great in the eyes of Allah (swt). RasulAllah ﷺ said, «قَتْلُ الْمُؤْمِنِ أَعْظَمُ عِنْدَ اللَّهِ مِنْ زَوَالِ الدُّنْيَا» “Killing a believer is more grievous before Allah than the extinction of the whole world.” [An-Nasa’i]. The blood that has been spilled must not be betrayed by hardening stances and intensifying the conflict. The spilled blood must compel the disputing Muslims on both sides to repent and return to their Deen to settle their dispute. Allah (swt) said, فَإِن تَنَازَعْتُمْ فِي شَيْءٍ فَرُدُّوهُ إِلَى اللَّهِ وَالرَّسُولِ إِن كُنتُمْ تُؤْمِنُونَ بِاللَّهِ وَالْيَوْمِ الْآخِرِ “And if you disagree over anything, refer it to Allah and the Messenger, if you should believe in Allah and the Last Day.” [Surah an-Nisa’a 4:59].

It is a tragedy that the current conflict arose even though previously the Pashtun tribal resistance worked hand in hand with the intelligence of the armed forces to uproot the Soviet Russian occupation, so decisively that the Russians have never dared to return. However, the current conflict arose because instead of working to uproot the US occupation of Afghanistan, Pakistan’s rulers ensured its protection by crushing the Pashtun tribal resistance. Pakistan’s rulers used force to suppress the deeply rooted Islamic sentiments that have mobilized the noble Pashtun for centuries. The rulers did not shy from using military operations, collective punishment, internal displacement, enforced disappearances and allowing drone attacks, in their reckless bid to serve their American masters. The rulers exceeded all limits in force, which only alienated and enraged the honourable Pashtun. Thus, force initiated the conflict and more force will only prolong the conflict and the swords that must be broken will be sharpened.

O Muslims of Pakistan in General and their Armed Forces and Pashtun Tribal Brothers in Particular!

Break any sword that points to a Muslim and direct your swords at our enemy, the hateful states of kufr that create division amongst us and exploit it so that they dominate us. Islam demands the severing of all ties with the hostile states, for they only seek our collective ruin. Far from being a source of strength, ties with hostile states are the source of our greatest weakness. Allah (swt) warned, مَثَلُ الَّذِينَ اتَّخَذُوا مِن دُونِ اللَّهِ أَوْلِيَاءَ كَمَثَلِ الْعَنكَبُوتِ اتَّخَذَتْ بَيْتًا وَإِنَّ أَوْهَنَ الْبُيُوتِ لَبَيْتُ الْعَنكَبُوتِ لَوْ كَانُوا يَعْلَمُونَ “The example of those who take allies other than Allah is like that of the spider who takes a home. And indeed, the weakest of homes is the home of the spider, if they only knew.” [Surah Al-Ankabut 29:41]. The kuffar will extend ropes to us, tying us to them only to worsen our situation. There is not a single place within the Muslim World where turning to the kuffar for assistance has brought anything but more destruction and pain. Thus, any appeals to the kuffar, approaching them and asking assistance from them in the conflict, must be rejected. The Muslims must gather in one row, allying with each other for power and strength, to uproot the disruptive US presence which has thrown our region into chaos for so long. Allah (swt) said, الَّذِينَ يَتَّخِذُونَ الْكَافِرِينَ أَوْلِيَاءَ مِن دُونِ الْمُؤْمِنِينَ أَيَبْتَغُونَ عِندَهُمُ الْعِزَّةَ فَإِنَّ الْعِزَّةَ لِلَّهِ جَمِيعًا “Those who take disbelievers for allies instead of believers, do they seek power with them? Verily, then to Allah belongs all power.” [Surah an-Nisa’a 4:139]

O Muslims of Pakistan in General and their Armed Forces and Pashtun Tribal Brothers in Particular!

The fires of conflict were ignited due to disobedience of Allah (swt) and His Messenger ﷺ and they will be extinguished by returning to obedience to Allah and His (swt) Messenger ﷺ. Allah (swt) said, وَاعْتَصِمُوا بِحَبْلِ اللَّهِ جَمِيعًا وَلاَ تَفَرَّقُوا وَاذْكُرُوا نِعْمَةَ اللَّهِ عَلَيْكُمْ إِذْ كُنْتُمْ أَعْدَاءً فَأَلَّفَ بَيْنَ قُلُوبِكُمْ فَأَصْبَحْتُمْ بِنِعْمَتِهِ إِخْوَانًا وَكُنْتُمْ عَلَى شَفَا حُفْرَةٍ مِنْ النَّارِ فَأَنْقَذَكُمْ مِنْهَا كَذَلِكَ يُبَيِّنُ اللَّهُ لَكُمْ آيَاتِهِ لَعَلَّكُمْ تَهْتَدُونَ “And hold fast, all of you together, to the Rope of Allah, and be not divided among yourselves. And remember Allah’s favor on you, for you were enemies of one another but He joined your hearts together, so that, by His grace, you became brethren, and you were on the brink of a pit of Fire, and He saved you from it. Thus Allah makes His Ayat clear to you, that you may be guided.” [Surah Aali-Imran 3:103]. It is a grave disobedience to call for bonding on any basis other than the brotherhood of Islam. RasulAllah ﷺ said, «مَنْ قُتِلَ تَحْتَ رَايَةٍ عُمِّيَّةٍ يَدْعُو عَصَبِيَّةً أَوْ يَنْصُرُ عَصَبِيَّةً فَقِتْلَةٌ جَاهِلِيَّةٌ» “One who is killed under the banner of a man who is blind (to his just cause), who raises the slogan of family or supports his own tribe, dies the death of one belonging to the days of Jahiliyyah (Ignorance).” [Muslim] So let the Muslims reject any calls to tribalism or nationalism and grasp the rope of Allah (swt) firmly, for this is the key to our strength.

We cannot expect any resolution to the conflict from the current rulers, as they do not rule by all that Allah (swt) has revealed. Instead, under their sinful, incompetent leadership, the conflict will only intensify. RasulAllah ﷺ,«إِذَا وُسِّدَ الأَمْرُ إِلَى غَيْرِ أَهْلِهِ فَانْتَظِرِ السَّاعَةَ» “When the affair is given to other than its rightful people, then await the Final Hour.” [Bukhari]. It is upon us all to abandon the current rulers and work for that which will ensure our unity and strength before the enemies, the Khilafah (Caliphate) on the Method of Prophethood. It is the Khilafah alone that will tear up all ties with the hostile states, closing their spying diplomatic missions, expelling their mischievous personnel and uprooting their disruptive presence on Muslim Lands. And it is the Khilafah alone that will raise and motivate the Ummah upon Islam, rather than acting as a policeman for the West in its war against Islam. It will release the wronged missing persons to their families and restore the rights of all the citizens according to Islam. So let the Muslims strive for the ruling by all that Allah (swt) has revealed, which alone will heal the hearts of the believers, even though the kuffar will dislike it.