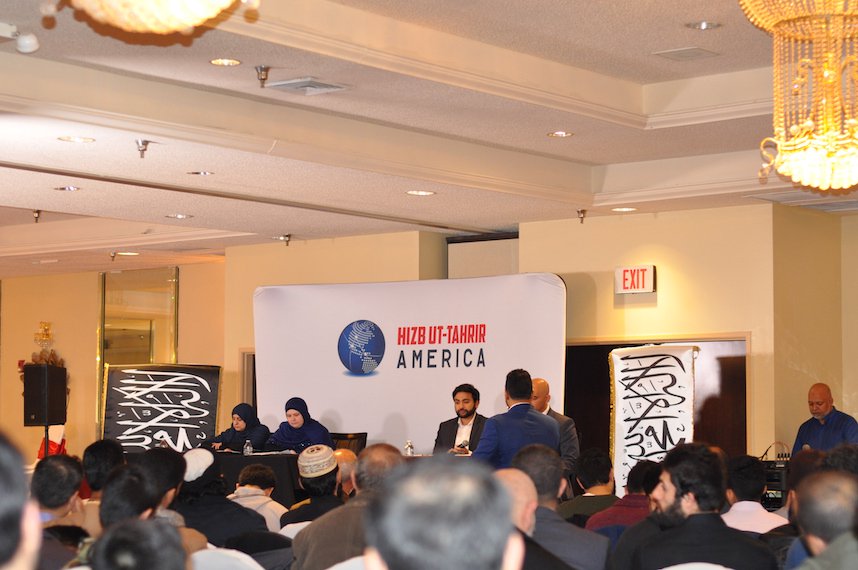 Chicago, 14 April 2019 – Hizb ut Tahrir / America successfully held its annual Khilafah Conference, as part of a global campaign occasioned on the anniversary of the abolishment of the Khilafah (Caliphate) in 1924. It is a global call to Muslims worldwide to stand up and fulfill the obligation to resume the Islamic way of life, as decreed by Allah (swt), by reestablishing the Khilafah on the path of our Prophet ﷺ.

This year’s conference was titled ‘Strengthening our Families: Securing our Future.’ The conference brought to attention the secular onslaught on the family and the response needed from the Muslim community. The attack on the Muslim mind seeks to build a secular Muslim identity – one that looks to secularism for solutions to our social, economic, and political problems. This secular Muslim identity that the West desires is to mold it to the narrow confines of a model minority that must conform to liberal values, rather than be a part of the global Ummah, that upholds purely Islamic values. The conference was started by reading the last 6 ayats of Surat Attahreem by Abu Anas. The conference consisted of four speeches.

Dr. Ghazi Sleem started the speeches by giving a poetry, titled ‘This is our Khilafah: a guidance for all of the mankind’. He talked in brief about the history of the khilafah since Abu Baker Assiddeeq till it was demolished by Mustafa Kamal. He talked about the leadership of Hizb ut Tahrir and the current Ameer Abu Yaseen. He finished the poetry by emphasizing on the necessity of reestablishing the khilafah and how it’s the mercy for all the mankind.

Dr. Abdur-Rafay, in the second talk, titled ‘Fitting in or Standing out,’ spoke to the quintessential dilemma weighing down on Muslims in the West namely, whether they should fit in and give into the secular tidal waves around them or stand out authentically holding onto Islam despite the overwhelming pressure. The reality, he continued, is that the Muslim Community is witnessing unabashed attempts to compromise Islamic values to conform to secular ones in hopes of gaining legitimacy in the West. Side stepping and twisting clear Islamic rulings on abortion, gender relations, and the family structure, to name a few. Emphatically, he concluded, that against the concerted efforts and policies drafted to remove Islam from the Muslims, the Muslim community must take a stand, be unique, strive to be the examples for their children, and to be real shepherds leading the masses and their society to salvation, just like the Prophets of the past. This translates into the fact that we have to build the mentalities and values of our youth and our families, based on Deen of Allah (swt), Islam, like those of the Sahaba (ra). He reminded us to always keep in mind that we are the ones with true concerns as well as true solutions, for the condition of humanity and their salvation from problems in this world and in the next, as we are the ones who have the light of Islam with us. This is, the responsibility and the honor that Allah (swt) has bestowed upon us and we have to stand out and carry this responsibility successfully in this world and in the next, in Sha Allah.

The third topic, ‘Empowering Youth to Lead the World,’ was addressed by two sisters Sr. Safia and Sr. Sara. This topic had two perspectives, one for the parents, the second for the youth.

In the first part, which addressed the parents, Sr. Safia noted that parents hold fear and anxiety for the future of the youth, and rightly so in light of secularism, capitalism, and their various by-products fracturing the community. Moreover, the pressure on the youth to conform to secular society is at an all-time high, via the government, think tanks, media, educational institutions, and even in the form of the heavy-handed push towards gender-free locker rooms and bathrooms. She informed the parents that it is very important for us to focus our efforts on the following four areas:

In the second part, which was addressed to the youth, Sr. Sara echoed the words of our Prophet ﷺ to take advantage of youth before old age, especially so under the ideological onslaught of today. Following are some of the very important points that she stated youth of our Ummah, need to remember at all times:

She concluded that the youth of today’s generation are the leaders who will be responsible for re-establishing the Deen of Allah (swt) through the Islamic Khilafah state, in Sha Allah.

Br. Haitham, in the last and keynote talk titled ‘Rise to the Challenge,’ asserted that parents take great care in ensuring the well-being of their children; however, “gone are the days where we worried [just] about after school fights… now we have drugs, zina, LGBTQIA-LMNOP agendas, cutting, cyber bullying, trafficking, xenophobia and Islamophobia”. Accordingly, he continued, the greatest threat to our children and our future comes from the wrong ideas that shape their thinking, moral compass, and reality, add to that the fact that they are left with very little protection. Today, in the absence of the Khilafah state, the first and most important line of defense against this onslaught that we are left with is the family. Thus, we have to work very hard to make our homes like the Dar Al-Arqam of the days of the Sahaba (ra). Where we, just like the Sahaba (ra), need to understand the ills that are consuming the world, their roots in the Secular-Capitalist Order, and prepare our children to become the leaders of change. We have to teach our children to care about others around them. We have to educate them about the ills of secular-capitalist way of life, like the life and poverty in the ghettos of United States. They should understand the abject poverty and its practical meaning in the form of global human hunger, the exploitation of children and women among others. They need to be educated so they can challenge the secular narrative and provide viable solutions from the Deen of Islam.

Their discussions, within our communities, at Masajids and universities should be about which of the current two systems secularist-capitalism or Islam, is best for families, society and humanity. They should present how Islam addresses poverty, injustice, industry, and how Islam’s economic system would work to ensure the prosperity of mankind, how Islam’s judicial system would provide true justice for all. He reminds us that it will be a catastrophe if our children do not know that they are the ones who have the solution to all of humanity’s problems, the Deen of Islam. Furthermore, he reminded us that, parents need to take a very pro-active role, and we need to be at the forefront of the intellectual fight against secular ideological onslaught. We need to exemplify the values of Islam in our lives so our children can see true walking talking models of Islam to follow. He reminded us that we Muslims are the only ones who can rise up to the challenge today. He concluded that rising to the challenge means, to work to re-build the strong ideological Khilafah State, which will be the one that will help defend humanity from the onslaught of secular-capitalist destruction and misery. Moreover, we should always remember that Allah (swt) is with us and that victory is only for the righteous.

Hizb ut Tahrir is a global, Islamic political party working to resume the Islamic way of life by reestablishing the Khilafah upon the method of the Prophethood in the Muslim world. The party does not seek or attempt to establish the Khilafah in any of the western countries including America. The party does not use or approve of militant means to achieve its goals.