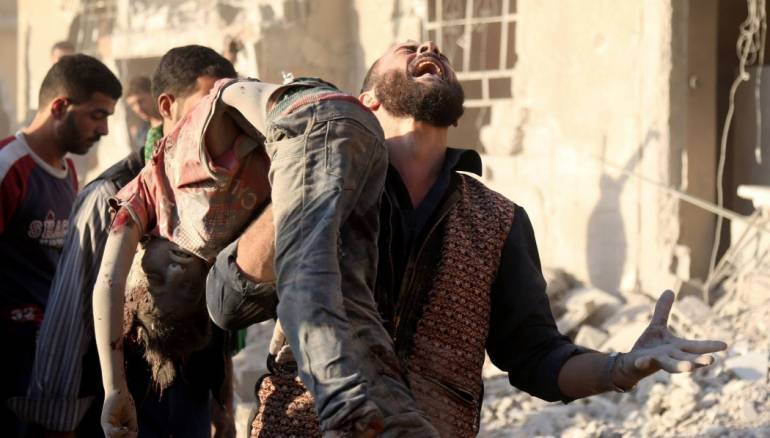 The Syrian tyrant and the Russian guarantor escalated their bombardments on the liberated cities and towns of northern Syria; they used rocket launchers and artillery shells, as well as warplanes that had been absent for months from the skies of liberated areas.

As a result of this escalation, there were many massacres against children, women and the elderly, and the displacement of the population in those targeted areas amid the astonishment of the people and their rage. The Russian guarantor kills and displaces and the Turkish guarantor prevents the factions from crossing the red lines and only observes in silence.

What is happening against you of brutal massacres is only a way to subject you to accept the outcomes of Sochi, the most important of which is to create a buffer zone behind which the tyrant of Ash-Sham and his aides will be protected.  It will serve as a big prison and will prevent you from leaving it.  And the objective of your revolution of toppling the regime will be hard to achieve. In addition to the opening of international roads that will enable the tyrant of Syria to penetrate the liberated areas; and grant him international sovereignty over them.

It is clear to all the role of the Turkish regime and the role of its check points, they are only for observation and not for your protection as some of you may think. So do not tie yourselves to dreams that are only found in your imagination and far away from reality. It has become apparent that the ruling regimes in the Islamic countries are not there to protect their people; but rather to kill them in case they just thought of revolting against them; how will they therefore protect other people?! As it has become clear to you, these regimes care only of achieving their interests and the interests of their masters, even if the cost is the body remains and blood of Muslims.

Your submission to the resolutions of international conferences will not save you from the crimes of the tyrant of Ash-Sham, and the crimes of its masters. Your silence from saying the word of truth has enticed the weak souls to trade with your sacrifices. You have no choice but to be patient and steadfastness; and to reject all these decisions. You must also raise your voice in the face of anyone who wants to tamper with the fate of your revolution, which has made precious and generous efforts for the liberation from injustice and tyranny and to establish the rule of Islam.

And know that the only guarantor to you is Allah (swt); He says in His Noble Book: وَنُرِيدُ أَنْ نَمُنَّ عَلَى الَّذِينَ اسْتُضْعِفُوا فِي الْأَرْضِ وَنَجْعَلَهُمْ أَئِمَّةً وَنَجْعَلَهُمُ الْوَارِثِينَ * وَنُمَكِّنَ لَهُمْ فِي الْأَرْضِ وَنُرِيَ فِرْعَوْنَ وَهَامَانَ وَجُنُودَهُمَا مِنْهُمْ مَا كَانُوا يَحْذَرُونَ “And We wanted to confer favor upon those who were oppressed in the land and make them leaders and make them inheritors * And establish them in the land and show Pharaoh and [his minister] Haman and their soldiers through them that which they had feared” [Al-Qasas: 5-6]

And He is the One who says: يَا أَيُّهَا الَّذِينَ آَمَنُوا إِنْ تَنْصُرُوا اللَّهَ يَنْصُرْكُمْ وَيُثَبِّتْ أَقْدَامَكُمْ “O you who have believed, if you support Allah, He will support you and plant firmly your feet” [Muhammad: 7]

So rush to the support of Allah (swt) and work together with Hizb ut Tahrir, the frontrunner who does not lie to his people, by working to establish the Khilafah Rashida on the method of Prophethood, that implements Allah’s Law on the land, and protect the Muslims and looks after its affairs and carries the message of Islam, the mercy to mankind. Allah (swt) says: