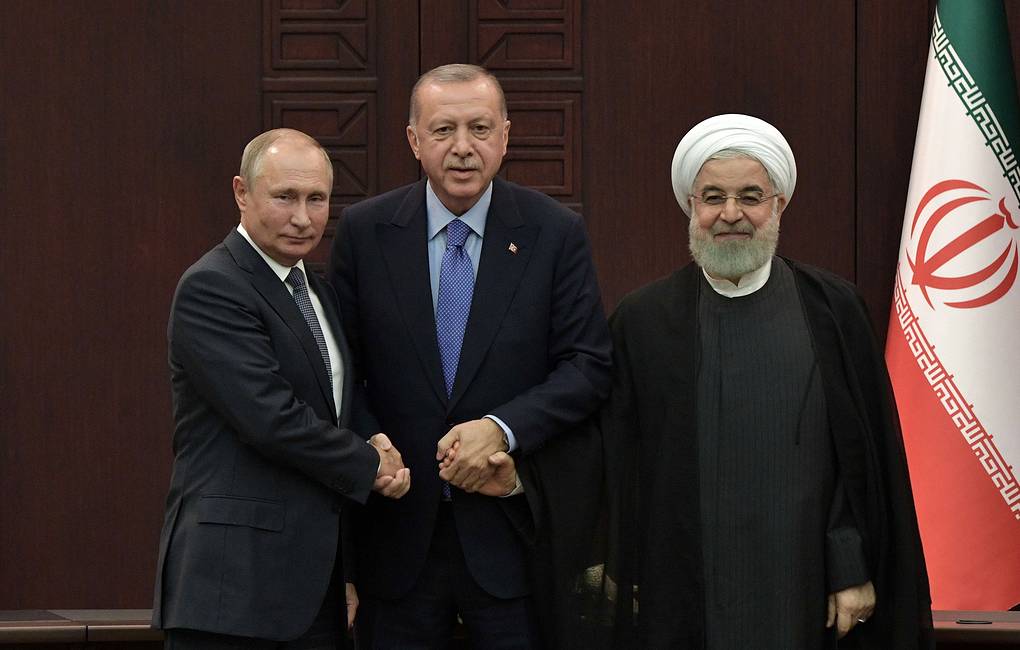 “Do not incline towards, nor rely upon, those who are bent on evildoing, or the Fire may touch you”

On Monday, September 16, 2019, a new tripartite summit on Syria was held in Ankara, bringing together Turkey’s President Erdogan, Russia’s President Putin, and Iran’s President Rouhani. The joint statement issued at the end of the summit strongly affirmed, “The preservation of the sovereignty and territorial integrity of Syria and adherence to the purposes and principles of the United Nations. And that there will be no military solution to the conflict in Syria.” They agreed that the solution would be solely by the Syrians themselves, and within Syria, through the UN facilities, and a political process consistent with UN Security Council Resolution 2254. They expressed their satisfaction with the successful conclusion of the Constitutional Commission and expressed their readiness to facilitate the commencement of the work of the Constitutional Commission in Geneva, in accordance with the decisions of the National Syrian Dialogue Conference which was held in the Russian Sochi.

This fifth tripartite summit, which was held according to the Astana formula, is no different from the previous four summits or the Sochi Agreement. There is nothing behind the sophistry of the “formation of the new Constitutional Commission”, which nothing is known of it until now except the repetition of what was mentioned in previous summits. The main purpose of these successive summits is to produce the political solution that America has defined in Syria, and to return Syria to the oppressive Assad regime. The disputes shown by these three leaders with America have nothing to do with the truth, because what brought the three presidents together, distributed roles among them, and defined their areas of work is America. But when they claim that they have done what they did against America’s will, they only fool themselves and the groups who are forced to believe them. Aside from those, the ones with political insight see the truth clearly as we outlined.

The decisions of the summit, which was held under the tutelage of America, and the statements that ensued in it, outraged the Muslims. It was only welcomed by Assad’s supporters and the secularists who support the Syrian regime. When Erdogan says, “We currently host 3.6 million Syrian refugees who have fled injustice, terrorism and massacres in our territory,” does he not know that those who sit with him at the same table are those who carry out the terrorism and massacres in Syria? Does he not know that Rouhani is protecting the unjust Assad? Does he not know that the Iranian army is the one committing the massacres in Syria? Does he not realize that the one who rains bombs and kills Muslim children in Idlib and the rest of Syria is the terrorist Tyrant Putin? Aren’t Russia and Iran not Assad’s murderous partners in his crimes and massacres?

Oh Muslims! You have shed rivers of tears because of the grievances that have been going on in Syria for many years, you helped the refugees, you were generous in sending your aids to the oppressed inside Syria, and you shared with your Muslim brothers and sisters their sorrow. But your rulers today are working to hand over your oppressed Syrian brothers to the oppressors under the job assigned to them from America, leaving them under the mercy of murderer criminals. If you know this, you must hold them accountable and show your position in the face of this betrayal against the blood of Muslims.

And you, President Erdogan! Why are you working on legitimizing Assad, who has killed more than 500,000 people of Syria? Why are you sitting at the same table with the traitorous and deadly Iran, America’s partner in Afghanistan and Iraq yesterday, and today in Syria? How do you agree with the Kafir Russia, which is committing massacres in Syria in every way? Beware of the wrath of Allah: وَلَا تَرْكَنُٓوا اِلَى الَّذ۪ینَ ظَلَمُوا فَتَمَسَّكُمُ النَّارُ وَمَا لَكُمْ مِنْ دُونِ اللّٰهِ مِنْ اَوْلِيَٓاءَ ثُمَّ لَا تُنْصَرُونَ “And do not incline towards, nor rely upon, those who are bent on evildoing, lest the fire [of the hereafter] touch you: for [then] you would have none to protect you from God, nor would you ever be succoured [by Him].” [Hud:113]