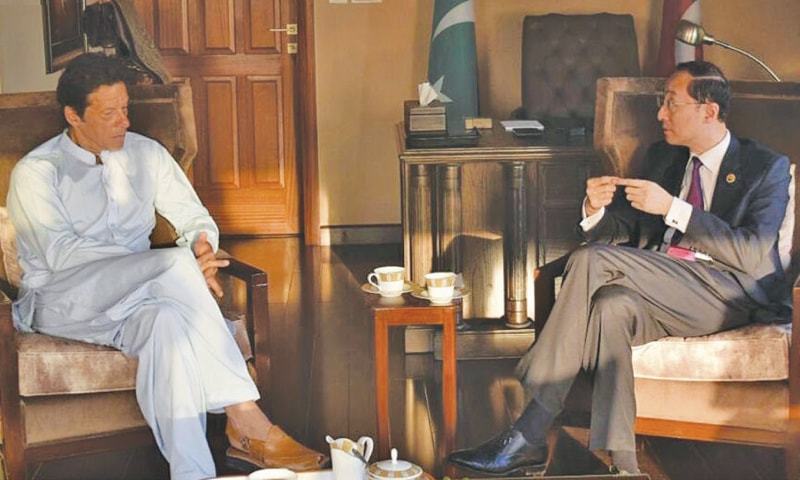 Pakistan’s Prime Minister Imran Khan has dodged a question on the reported detention of as many as two million Muslims in the western Chinese region of Xinjiang, saying he “didn’t know much” about the issue.

In an interview with the Financial Times released on Wednesday, the leader of the mainly Muslim nation was questioned about his stance on the mass detention centers where many of China’s Muslim-majority Uyghurs have been sent. Activists and former detainees say the camps are designed to eradicate Uyghur culture and Muslim religious practices.

“Frankly, I don’t know much about that,” said Khan, whose government is a major beneficiary of Chinese aid. (CNN 29th March 2019)

For the leader of a Muslim country that is doing a lot of business with China, has citizens whose Uyghur family members have been abducted or denied from travel with their Uyghur spouses to Pakistan and has access to the news as much as anyone else does, why would the Prime Minister of Pakistan deny knowledge of the treatment of the Uyghur Muslims in China, not for the first but second time when directly asked in an interview?

In February, Turkey denounced the camps, describing them as a “great shame for humanity.” Other Muslim-majority countries with close economic and diplomatic links to China — including Saudi Arabia, Malaysia and significantly Pakistan — have refrained from speaking out. The response of the leaders of the Muslims at the plight of the Uyghurs is not surprising as they are blind, deaf and dumb to the situation of the Ummah. If they make mention, it is not followed by any action. Their love for their positions, self-image and money is a motivation that far outweighs any ounce of humanity or sense of responsibility.

Despite multiple witnesses from inside the camps describe facilities resembling prisons, physical and mental abuse, and compulsory rote lessons in Communist Party propaganda which have circulated the social media and some mainstream media, the Muslim leaders deny or pay lip service and carry on with their dealings with China, feeling no shame!

Between 2008 and 2017, Islamabad purchased more than $6 billion of Chinese weaponry, according to think tank CSIS. Pakistan has also benefited greatly from Chinese infrastructure spending, as part of President Xi Jinping’s global Belt and Road initiative, and is one of China’s biggest arms buyers.

Today the Ummah is yearning to witness the likes of Muhammad bin Qasim or Salahudin al Ayubi (may Allah be pleased with them). Despite not living in the lands they liberated, Sindh and Al Quds respectively, their vision was not limited to their interests or any deals with the Kafir who is trying to commit a genocide of Muslims.

Muhammad bin Qasim came from Taif and Salahudin Al Ayubi from Iraq. How much information, knowledge and details did they need to step up and move to defend the oppressed?! Hearing of the imprisonment and torture of Muslims ignited their Iman and their concern for the Muslims in lands far away motivated them to move and apply the Islamic solution to the problem, jihad in the path of Allah (swt).

Leaders today do not possess a limitation of information but the limit for their actions today are motivated by self-preservation, money, and diplomacy for interests, as RasulAllah ﷺ predicted:

Thawbaan (ra) narrated that the Messenger of Allah ﷺ said: «يُوشِكُ الْأُمَمُ أَنْ تَدَاعَى عَلَيْكُمْ كَمَا تَدَاعَى الْأَكَلَةُ إِلَى قَصْعَتِهَا»، فَقَالَ قَائِلٌ: وَمِنْ قِلَّةٍ نَحْنُ يَوْمَئِذٍ؟ قَالَ: «بَلْ أَنْتُمْ يَوْمَئِذٍ كَثِيرٌ وَلَكِنَّكُمْ غُثَاءٌ كَغُثَاءِ السَّيْلِ وَلَيَنْزَعَنَّ اللَّهُ مِنْ صُدُورِ عَدُوِّكُمُ الْمَهَابَةَ مِنْكُمْ وَلَيَقْذِفَنَّ اللَّهُ فِي قُلُوبِكُمُ الْوَهْنَ»، فَقَالَ قَائِلٌ: يَا رَسُولَ اللَّهِ وَمَا الْوَهْنُ؟ قَالَ: «حُبُّ الدُّنْيَا وَكَرَاهِيَةُ الْمَوْتِ» “Nations are about to unite (and call) each other to set upon you, just as diners are invited to a plate of food.” It was said: “Will it be because of our lack of numbers that day (i.e. will be small in number)?” He ﷺ said: “Rather, you will be many on that day, but you will be like foam (that floats) on the river. Allah will remove the fear of you from the hearts of your enemies and put Wahn into your hearts.” It was said: “O Messenger of Allah, what is Wahn?” He ﷺ said: “Love for the dunya and hatred for death.”