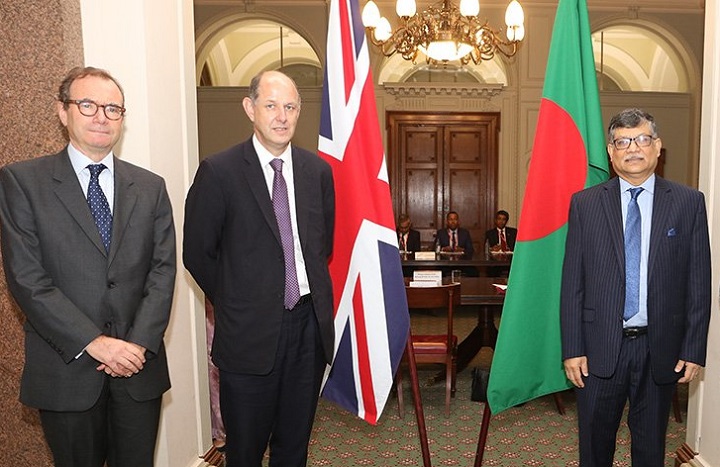 Being colonial master, historically, Britain has had strong ties with the ruling Hasina government in Bangladesh. Her government has always been nurtured by Britain so that they could retain their influence over this land. Due to her geo-political strategic importance, Bangladesh now has become a hotbed for neo-colonial and regional powers. When America and China are flexing their muscles to secure their respective shares in this land, Britain will certainly direct her agent, so that they, America and China, cannot take the upper hand and are dealt within the framework of British interests. At the 4th Strategic Dialogue held in London on September 9, 2021, Britain recognized Bangladesh as “critical stability provider” in the Indo-Pacific, which is currently a vital theater for American strategic rivalry against expanding Chinese influence. Thus, Britain is showcasing the necessity of Hasina to remain in power on the pretext of stability, whereas people of the country cannot bear her treacheries and zulum anymore. So, it is obvious that Britain now wants her historical agent Hasina to ensure her master’s interests in the power politics of this region. Even though the shameless Hasina regime has kept on denying election rigging, extrajudicial killing, enforced disappearance etc. to their own people, they confessed these candidly before their master at the dialogue and pledged to sort these out; that lucidly depicts how loyal Hasina’s regime is to her master. Interestingly, when America criticized Bangladesh’s human rights situation with similar allegations of election rigging, arbitrary killing, and forced disappearances etc., Hasina government has rejected those allegations vehemently and rather asked America to ponder upon its own human rights violation (“Bangladesh rejects US human rights report as ‘one-sided’”, bdnews24.com. March 13, 2020).  When Colonialist America is playing its cards of human rights, environment, development, etc. against Hasina, her master is also extending the support to rescue a failing agent; also, telling her off before the people revolt because of them. All these strategic rivalry are tricks of disbelieving Colonialist powers and Hasina regime is maliciously entangling us into these death traps to secure her throne.

O Muslims, Hasina, as well as all other secular rulers exist only to serve the interests of the Kuffar-Colonialists. In the end, we can expect no good from Hasina or any other Western-backed secular rulers other than that they will throw us into the traps of US-UK as a victim of their geopolitics. O People, we warn you about the ongoing rivalries of disbelieving powers against Bangladesh and the traitors like Hasina who will not fail to materialize the plots of the enemies of Allah (swt) at our expense. We urge you to rush towards re-establishing the promised second Khilafah Rashidah (rightly guided Caliphate) on the method of the Prophethood, which will abolish the agent ruling classes of the belligerent colonialist Kuffar and their influence from this land for Islam to be dominant once again over our affairs through the establishment of the comprehensive rule of Islam. Allah (swt) says,

“and never will Allah give the disbelievers over the believers a way [to overcome them]. [Surah An-Nisa’a 4:141]