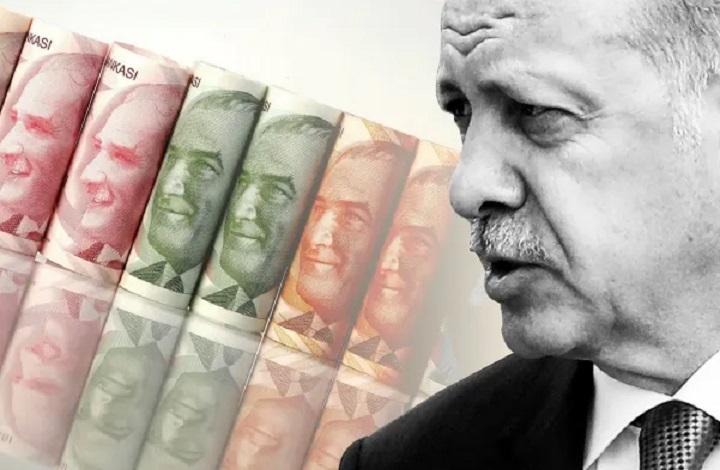 Over the past two months, Turkey was going through a major economic crisis. The Turkish lira is constantly declining day by day. Although Wednesday heralds the arrival of Thursday, yet the wrong policies that were implemented over the years are waving an invitation to usher crises. Although the exchange rate has also increased, officials are only watching the developments, even the minimum wage announced by President Erdoğan as good news for the year 2022 remains below the rising inflation level. While the figure announced by Erdogan for the minimum wage was 4253.4 Turkish liras, which was equivalent to $274 at the time, today it is equivalent to $258. This situation alone is sufficient to show the great predicament that the country is suffering from. Especially with the expected rise in prices in the new year, the minimum wage will not enable our working brothers even to meet basic needs.

Populist rhetoric and promises, along with political fears in the face of the crisis, are causing the budget deficit to increase even more. An attempt is made to cover the budget deficit by investing foreign capital or borrowing at a high interest rate (usury), or by printing money without cover. Turkey has had a budget deficit since 1970, and it is doubling over time. The AKP government is multiplying the budget deficit through unnecessary expenditures. With the construction of highways, bridges, canals, tunnels, and spending on airports and city hospitals, budget deficits have become impossible to cover. Of course, the roads, bridges and hospitals that the people need should be built, but within the framework of the available capabilities. Also, printing money without a cover and projects implemented using debts with high usurious returns bring the state another step towards disaster. In addition to unnecessary investments, corruption, bribery, and bids offered at random and outrageous prices, all make the economic crisis an inevitable result. Therefore, corruption and waste are the causes, and the budget deficit and the economic crisis are the result.

In these days in which inflation exceeds 70% according to unofficial figures, the Turkish lira loses its value day by day, people become worried because of the high cost of living, Hizb ut Tahrir is offering a correct and radical solution based on a sense of responsibility. Unlike other political parties, it stems from Islamic thought and not from Capitalism, which is the main source of the problem.

In this way, we in Hizb ut Tahrir / Wilayah of Turkey, will explain in detail how to reduce inflation, how to stop the abnormal rise in exchange rates, how to revive trade without foreign investors, how to remove obstacles to agriculture that is almost non-existent, how to eliminate unemployment, and how interest (usury) and the stock market exploits our employees, how to establish a tax-free economy, and what the basic resources of the economy consist of. We will soon share with the public our work entitled, “Islamic Solutions to Economic Crises in 10 Articles”.

In this study that we prepared on the basis of the Islamic economic system, when providing solutions to economic and moral crises, we did not resort to any ideology other than Islam. Because Islam is the only ideology capable of producing real solutions to economic, political and moral problems. Islam is not a Deen that locks people up in mosques only! Islam is not a Deen confined between the person and his Lord! Islam is not a Deen that must be remembered on religious occasions and ocassions! Rather, Islam is a system that directs all areas of life. It elevated the Muslims in the past and elevated them to rule the world. Islam today still has the same strength! As the Islamic economic system is the only way to salvation not only for Muslims but also for all humanity caught in the clutches of capitalism, which made it lose its sense of mercy. You are not helpless! Because Islam is the only direction to solve all crises.