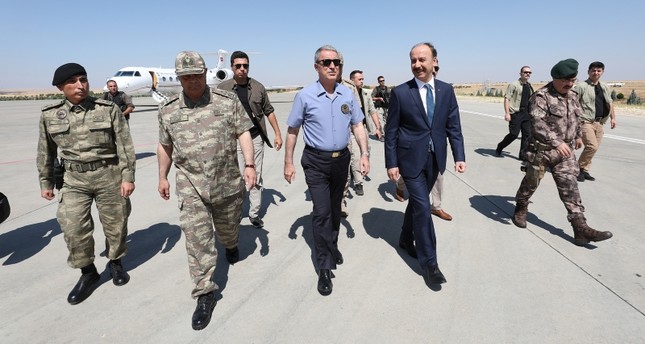 While talks on a “safe zone”, determined to be coordinated in northern Syria, have been accelerated between the US and Turkey, Foreign Minister Mevlüt Çavuşoğlu stated “there are many issues yet to be elaborated.”

Çavuşoğlu said, “US President Trump has promised 20 miles and YPG has to be removed. There are lots of Syrians and especially Kurds who want to return to that region. What we say is that America’s stalling tactic will not apply. They used such a stalling tactic in Manbij unfortunately and did not keep their promises.” (BBC News 15.08.2019)

Comment:
Friendship with the US does not only make you lose your Hereafter but also poisons your current life. A number of crumbs may appear to be of great interest to you in short term. But as time goes on, the costs you have to pay are twice as big as these crumbs, causing your compass to go astray. If you had done your politics not on the axis determined by the Kuffar, but on the orders of your Lord, you would have made those you followed servants of yourself. Thus, you would reach Allah’s approval by being the protector of the Muslims, and you would be the sorrow of the unbelievers disgracing them. Unfortunately, the fact that the rulers who are far from realizing this are leading the Muslims and are causing the disbelievers to continue their hegemony over us.

The level of abasement is clearly indicated by the fact that Turkey’s rulers, who are not able to step a single inch out from American policies in foreign politics, still strive to solve even issues within their own borders according to the road map determined by America. These rulers pretend to be playmakers at every opportunity, though they were the pawns in every game. And maintaining politics of cooperation with America, despite admissions, like “the USA stalled us in Manbij, Trump promised us, or rather betrayed us”, is politics that lacks any rational explanation and foundation.

There is no means that America would not utilize for its own benefits. By the same token, there is no country that would not sacrifice for its benefits. Since the first days of the Syrian war, the USA built their policies towards the maintenance of the regime, and imbedded all powers into the process of this policy. Just as it contributed to the fall of Aleppo through its so-called terror operations following the promises of the USA, Turkey should be aware that it will be a mediator in carrying out new oppression, destruction, and massacres in this so-called safe zone game. In actual fact, the agenda of a safe zone along the border from Latakia to Cizre signals the start of the Idlib operation, which is clearly obvious by the fact that the regime, Iran and Russian forces encircle Idlib step by step through penetrating the reputed ceasefire zones. The Turkish government officials deceive the Turkish public through epic words, like cleaning the east of the Euphrates from terror and statements about depths and lengths and joint patrols in order to hide their real intention which is handing over Idlib to the regime’s control. A huge immigration wave will be inevitable with the start of the operation on Idlib, which is inhabited by nearly 4 million Muslims. Currently, Turkey’s only concern is impending new flood of immigrants. The wall built along the border as well as the observation points established around Idlib have no function other than providing intelligence to the regime. The aim of the Astana meetings was to gradually enclose the opponents in Idlib and its surrounding. And now, the final part of the plan is to bring an end to the Idlib issue with a safe-zone. The fact that all disbelievers agree on the safe-zone plan reminds us of this verse:

The United States want to ensure the safety of the eastern part of the Euphrates on behalf of YPG through the safe-zone process. At the same time, it wants to pave the way for an operation against it through distributing the population of Idlib across various areas in various depths and lengths. Furthermore, the statement of the Foreign Minister, Çavuşoğlu, during this process of creating a safe zone, that “there are Syrians who want to return” to these areas, reveals another intention which is the probability of sending a part of the immigrants to these so-called safe zones, as a consequence of the government’s failure in the last elections, the deteriorating economy, and the created negative public opinion towards Syrians. In fact, the government’s recent deportation policy towards Syrian refugees proves that this process is part of this politics.

Those who make use of their mind and who are capable of thinking have to know that they cannot make friendships with the disbelievers, because they are their own friends:

“And never will the Jews or the Christians approve of you until you follow their religion. Say, “Indeed, the guidance of Allah is the [only] guidance.” If you were to follow their desires after what has come to you of knowledge, you would have against Allah no protector or helper.”
[Al-Baqarah 120]

Every rational person sees that the disbelievers destroy regions they enter, slaughter and plunder, exploit and make that region insecure. In spite of this fact, our rulers, who are friends with these disbelievers, are incapable of remembering the past. While the massacres of these disbelievers continue in Iraq, Afghanistan, Libya and Chechnya, talking about the safe-zone is nothing but a mental disease.

Both deceiving and being deceived has become a custom for our rulers. Don’t you ever think?

For sure people will bring about a system with a ruler, who uses his mind according to the laws of Islam. And in that day the disbelievers will suffer fear and defeat, while the Muslims and the oppressed will rejoice safety and victory.