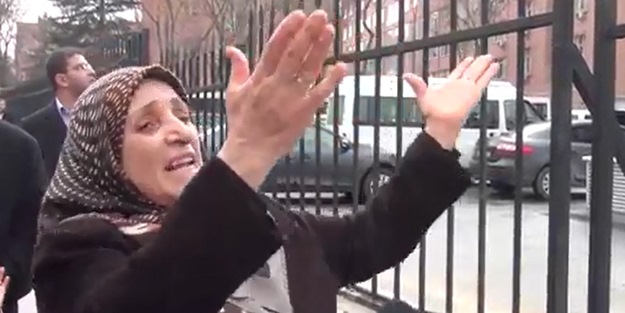 On Friday, June 23, 2017, Yılmaz ÇELIK, a honorable dawah carrier of Hizb ut Tahrir, has been detained in the evening on an iftar meal by the police of the Ankara Security Directorate of Anti-Terrorism Branch with close to 20 policemen. Yılmaz ÇELIK was sentenced to prison for 15-years before Eid ul Fıtr, which was executed with the approval of the 9th Criminal Office of the Supreme Court of Appeals. Yılmaz ÇELIK was sentenced in two separate court files, filed against him one in 2007 and the other in 2009 and has been condemned to membership of Hizb ut Tahrir for 7.5 + 7.5 years, 15 years in total.

During the period of the Turkish governments ruled by the British-Kemalists, Muslims were hanged on gallows and our values ​​were violated. Wars were openly made towards the headscarf and the Qur’an. The bilateral of those years is well known by all the segments in Turkey. The February 28 process, which we have not yet forgotten and can not get rid of because of the persecution, is filled with the anguish that these secular Kemalists have let the Muslims tasted. Now, those who are in power are the American-conservative democrats… They are also persecuting Muslims like secularists. Besides these American conservatives are very skeptical in every period about finding executors and executioners who practice their persecution.

The partnership between AK Party with the Gulen group until 2013 which is currently called “FETÖ”, is not a secret, forasmuch as they themselves accept this partnership. During the period of Afghanistan and Iraq occupation, AK Party government launched a very heavy struggle strategy against Hizb ut Tahrir, who revealed and explained the occupation policies of the unbelievers and the betrayals of the collaborator governments, and illuminated, warned and most importantly awakened Muslims on these issues. Almost every year in every city of Turkey, Hizb ut Tahrir members who worked for the beginning of an Islamic life and for the resignation of Khilafah Al Rashidah (Righteous Caliphate), operations were organized; arrests and unlawful trials and hundreds of people were sentenced to prison. American interests and the Gulen group’s so called “service” overlapped with the global malice policy, in this period those who wanted the caliphate were put on the target board.

They tried every possible method to stop the works of Hizb ut Tahrir, they slandered, they made false news, they tried to disgrace them in front of the public, they tried to simplify them, they tried to show them little and even tried to do something that will never happen. They set up traps by trying to show Hizb ut Tahrir as an armed organization so that they can judge them like they judge the other violent organizations. They tried to establish a relationship between the secular Ergenekon spectacle of Islam and the Caliphate with Hizb ut Tahrir. They made numerous accounts but they forgot one account. That account was the account of Allah. Allah is going to account both in this world and in the other world. Every cloud has a silver lining, conflict between the interests of the government and “FETÖ” began to clash. And this struggle made all the cruelties, the unlawfulness, the compasses, the pitfalls, revealed it as bright as the sunlight. However, we saw that the unlawfulness of the illegality that was revealed was only towards the secular Kemalists who were trialed by Ergenekon and Balyoz cases. Ergenekon and Balyoz defendants who were victims of the illegal trial of the Gulen group (“FETÖ”) during the rule of AK Party in 2002-2013 were acquitted individually, their certificate decisions were made and they were rewarded with millions of liras of compensation.

About the heavy punishment given to members and sympathizers of Hizb ut Tahrir, not one pen was moved. Not even a small step was taken to correct these tragicomic trials that have been going on for years and which have convicted and condemned hundreds of Muslims. We said, “The persecution of judiciary towards Hizb ut Tahrir” and we have shared these illegalities with the public one by one. Everyone heard the judiciary in the persecution. Although legal remedies have been tried, individual applications have been made to the Constitutional Court, but even though 2.5 years have elapsed, there hasn’t been a process yet. The courts were given retrial petitions, but none were accepted. The prosecutor, the judge, the law enforcement and the high judicial judges who are in charge of the Hizb ut Tahrir proceedings are now in prison with a claim to membership of “FETÖ”, although the names of these judges were published individually, not one official came out and said that unlawful decisions were taken in these files. On top of that, based on the ridiculous case-law decision of the 9th Criminal Court of the Supreme Court of Appeals, which the lawyers of the “FETÖ” judges took on Hizb ut Tahrir, they started new judicial proceedings on the members of Hizb ut Tahrir in 2014 and 2016.

O ruling governors, know very well that whatever law you have established against Hizb ut Tahrir judgments will remain unsold. Because you are abet of all these injustices, unlawfulness, and cruelty that have been made. You collaborated with the Gulenists yesterday and today you have found more cruel partners to enforce your judgment.

Here is the evidence of file of Yılmaz ÇELIK to this, who you removed from the iftar meal during the blessed Ramadan and sent him to prison by separating him from his loved ones, family, friends, dawah friends and most importantly from the Islamic Dawah without any crime made. Yılmaz ÇELIK was sentenced to penalty for having responded to the defamation and lies of “FETÖ”, known as the Gulenist. You did not hear wrong I’ll tell you once again: Yılmaz ÇELIK was punished for answering the slanders against Hizb ut Tahrir, and was sent to prison for 7.5 that was made by Samanyolu News, Zaman Newspaper, Aksiyon Magazine. How bad is the account that you have made, rulers! Don’t you ever take lessons from your previous partners?

Let’s come to the other 7.5 years criminal offense that has completed the 15 years of prison to Yılmaz ÇELIK? Yılmaz ÇELIK, was complaint by the President of ATO Sinan AYGÜN for sending an Eid Message to some official and civilian institutions in Eid ul Fıtr in 2007, by that he was punished for 7.5 years and imprisoned because he said Eid Mubarak. What shall I say that is enough for you as a shame!