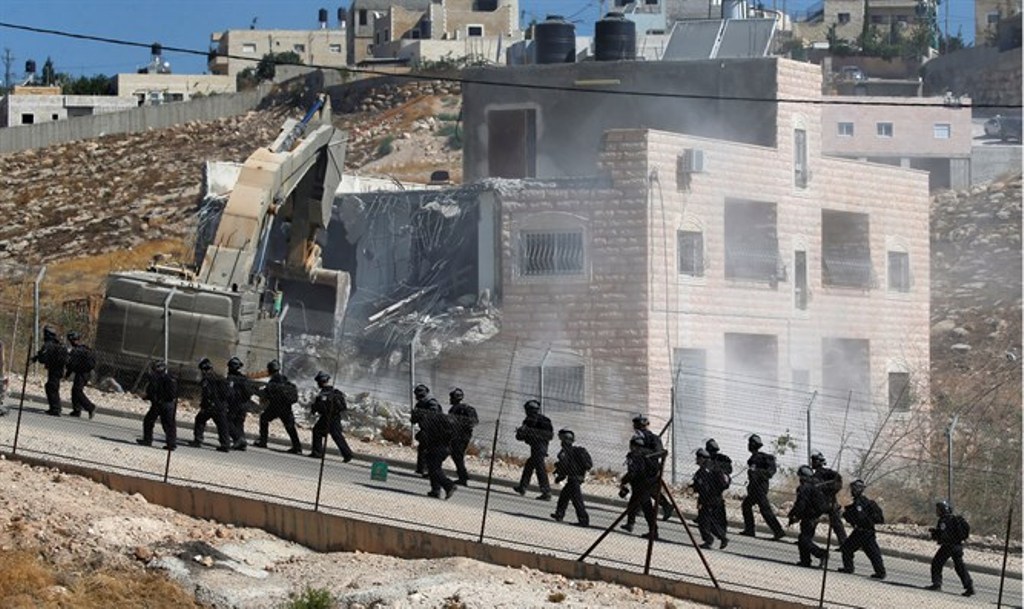 “The media reported footage of women and children screaming at the moment the occupation forces expelled Palestinian families from their homes to demolish dozens of apartments in the Palestinian Authority-controlled Area of Wadi al-Homs on the outskirts of occupied Jerusalem, claiming that they were close to the apartheid wall.”

The Jewish entity continues its aggression and defiance of Muslims and the so-called international law by confiscating more land, demolishing houses and displacing its people throughout occupied Palestine, especially in the city of Jerusalem and its environs, in order to expand its control and surround it with settlements from all sides after connecting them to each other through the Palestinian territories. It tries to remove everything that hinders the implementation of this plan, as happened in Shuafat, Beit Hanina, Al-Ram and Silwan neighborhood, which they call the “Holy Basin”, which is most exposed to Judaization and eviction, as nearly 657 houses are subject to Judaization under the pretext of being unlicensed. Now they want to evacuate the area of Wadi Al-Homs, which is close to the Apartheid Wall and is under the control of the Palestinian Authority from its owners, because it is an obstacle to settlement expansion. It was announced a few days ago that the Brown Line (light railway), which will be launched from the Gilo district to pass through the neighborhoods of Sur Baher, Mukher, Silwan, Bab El Amud and end in Kalandia, will be connected and it will destroy all the land and buildings in its path.

As usual, as if they were exonerated of the guilt of wasting Palestine and Jerusalem, the Palestinian Authority officials and the various movements have denounced this act as a war crime and ethnic cleansing, demanding the so-called international community, international institutions and human rights organizations to address the forced displacement which is implemented with total support of the US administration. President of the Palestinian Authority, Mahmoud Abbas, has sent letters to all international human rights and diplomatic bodies to inform them of this dangerous development aimed at uprooting Palestinians from their land, and recommended to stand with the citizens whose homes are targeted. He called for steadfastness and confronting the dangers of settlement, which is taking place in the Palestinian territories, as if he were anxious and concerned with them!!

This is your Quds (Jerusalem), and this is your Aqsa; both are subjected to constant Judaization and the attempt to obliterate their Islamic features. These unarmed people are exposed to expulsion and displacement with the blessing of America and the West, reassured that none of our incapable Ruwaibidhat rulers will oppose them, but on the contrary they bless these steps as they bless the Deal of the Century to please the Jewish entity and America and to preserve their thrones and chairs…

Is there not among you a right-minded man? How are you still patient about these conspiracies and negligence?! What more are you waiting for? Have you not had enough of the hollow and false words and statements from the agent subservient Palestinian Authority, the owner of the security coordination, while it approved and signed on all the terms of agreements and projects, which gave rise to what is happening of demolition of your homes, confiscation of your land and your displacement!

The liberation of Jerusalem, al-Aqsa and Palestine will not be by resorting to the international courts, which are originally conspiring, nor with compensation money that you may be given for some of what happened to you. It will not be with humiliating and shameful agreements and concessions, nor by your standing behind those who put their hands in the hands of your enemy, shaking hands and conspiring with them. Rather, it will be by cutting off these hands and those heads that plan to Judaize all of Palestine, demolish al-Aqsa and establish the alleged temple. This will only be done by the armies of the Ummah under the leadership of the Imam of the Muslims, who they fight behind and are protected by him.

So, remove the cloak of fear, cowardice and surrendering to the status quo and hold them accountable for the continuous abandonment of human beings, stone, land and honors, and call upon the Muslim armies, not international organizations. Allah (swt) says:

“And do not incline toward those who do wrong, lest you be touched by the Fire, and you would not have other than Allah any protectors; then you would not be helped.” [Hud: 113]