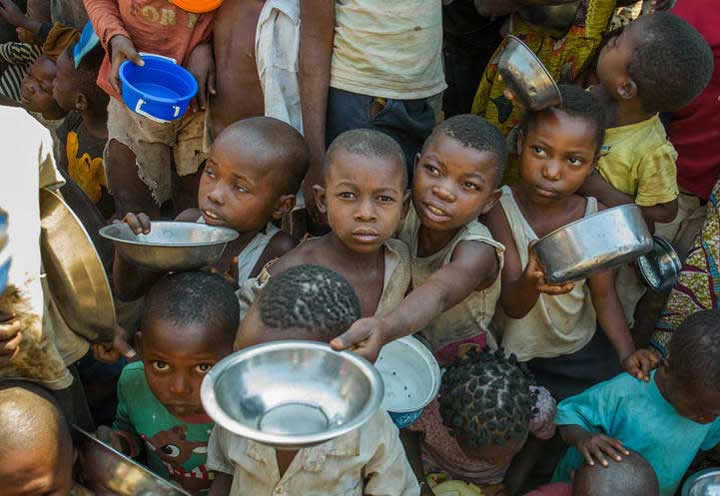 The World Bank confirmed in a report published on 07 October 2020 that the number of poor people in the world will increase and that “by the year 2021 this number may reach 150 million people living at $1.90 a day, less than the price of a cup of coffee in a developed country. “80% of the new poor people will live in middle-income countries”. “Children will be half of the poor” and women will “represent the majority of the poor people in most regions.” (France 24, 7/10/2020)

In its report on 10/12/2020, British newspaper Daily Express mentioned 6 places around the globe, saying that any of them could witness the launch of a war between two countries that would spark a major war in the whole world. What do they promise? What do they preach?

Hunger, poverty, unemployment, wars, victims and devastation are many titles associated to the world order that leads humanity today. Titles that are only foreshadowing a dark way that carries people down into the darkness. No two differ from what humanity suffers under this system, in which all its masks have fallen, and its true face has emerged: a savage system that feeds on people’s tragedies and leads them with iron and fire to impose and preserve its existence.

A leadership that has no concern behind it other than domination and hegemony in the world by all means: by maneuver, by force, by control over the necks. It leads people to make them its slaves, so it leads them as it pleases, so that it can maintain its own existence and defend. A failed leadership based on an incomplete man-made system unable to lead the ship and dock it in a safe land, floundering among the waves of renewed human problems and calling on organizations and associations to use them to whitewash the blackness of its concepts and laws which it is artful to change, renew and revise from time to time to show its quest and continuous work to get out of crises. It made the days of the year global days that cover its failure and inability to solve the growing problems (International Day for Women, Children, Older People, Health, Environment …), and to show a world order that takes care of people and seeks to solve their problems and that it alone is capable of leading them and that there is no alternative to it. However, the facts refute its allegations and reveal its ugly face: a corrupt, brutal system that only watches over the interests of a few capitalists and tramples on millions of people, so it inflicts woes and imposes on them by force its concepts and its leadership, and they obey it by coercion.

It is the nature of nations that they are led and always looking for leadership in life to govern them according to their ideas that they believed in. Therefore, it was necessary for someone to lead the nation to reform it with his righteousness, but if he lacks the ingredients of a true leader and searched for sovereignty and the rise of thrones, it will perish and be lost and will be executed by its enemies. What people live today under the capitalist system (poverty, oppression, and injustice) reflects the image of this leadership that seeks only to achieve its interests, striking their hopes for a well-off life.

The Islamic Ummah – and humankind in general – cries out for a correct leadership that sees good life in it and follows it with contentment and satisfaction, proceeding after it, confident that it will rest it and humanity in a safe land, and it will rid them of all life’s troubles and problems. As this leadership will move them in a specific and planned direction and motivate them to work and give, so that their interests are achieved in the short and long term. Leadership – in its true sense – is a responsibility towards the group that is led, and it is not a love of display or sovereignty, for whoever this is his goal, he would lead people to destruction and make them an easy prey for other countries, as is the case with Muslim leaders who made peoples like orphans at the tables of scoundrels. These rulers followed the West and became their servants instead of serving their people (and the master of the people is their servant). They were severed from the Ummah and did not adopt its ideology and did not carry its creed, but rather a “registered brand” made by the West according to its standards, in order to carry out its orders and malicious plans, so that it would be able to lead the Ummah, enter it into its hole, tighten the screws on it and orients it without its awareness according to its capitalist, corrupt view that excludes Islam and expels it from life. This is an inevitable result of every nation leaving others to create its leaders and not making them by itself.

So when the Ummah of Islam was under the command of its leaders whom it made and were among its righteous sons who feared Allah in it and sought its goodness and prosperity, and implemented in it the rulings of their Lord, it was leading the world with the light of Allah, glorious and strong, spreading Allah’s mercy and guidance to the worlds, but when its state fell and the enemies ruled over it and made for it leaders who are misled agents, it weakened, its honor became violated, its lands are robbed and the blood of its sons is shed.

“This day I have perfected for you your religion and completed My favor upon you and have approved for you Islam as religion.” [al-Maida: 3].

According to what was stated in Ibn Kathir’s interpretation of this verse that “This, indeed, is the biggest favor from Allah to this Ummah, for He has completed their religion for them, and they, thus, do not need any other religion or any other Prophet except Muhammad (saw). This is why Allah made Muhammad (saw) the Final Prophet and sent him to all humans and Jinn. Therefore, the permissible is what he allows, the impermissible is what he prohibits, the Law is what he legislates and everything that he conveys is true and authentic and does not contain lies or contradictions”.

Therefore, only Islam, which is the religion of Allah, which

“Falsehood cannot approach it from before it or from behind it; [it is] a revelation from a [Lord who is] Wise and Praiseworthy.” [Fussilat: 42], can lead the Ummah of Islam and all humanity. Likewise, the Ummah of Islam, which is the best of a nation brought out to the people with the legislation that Allah has bestow upon to enlighten its path and directs its life, is alone the source of the best leaders who this world can be blessed with if they adhere to Islam and its rulings and follow its guidance. Those leaders who have the sense of responsibility and fear of accountability from their Creator have always sought to break through difficulties and lead the Ummah and the people to safety on the basis of a distinct civilization that raises the status of the human being and elevates him to the highest levels of thought and gives him a good life. They walked on a path illuminated with a civilization that has high and sublime characteristics that distinguish it from all other civilizations, and how can it not be when it is from the Creator Who best knows the affairs of His servants? As for other civilizations, they stand helpless, failing in the face of the increasing problems of the people, and find no solutions to them. Leaderships that bring people back to the world of injustice and darkness because they are from the imperfect, impotent human being.

Today, the Islamic Ummah is looking for true leaders to restore to it its lost glory and its stolen dignity; it wants to overthrow the system in order to replace it with the system of its Aqeedah that will free it from subordination and dependency. However, it needs a conscious political leadership that leads it on the path of its Prophet, and follows his methodology of change and in the leadership of the Ummah and all the people.

After his first revelation, the Prophet (saw) formed a party based on Islam. This party that gathered the best leaders who spread this religion and elevated the status of its nation. And if the Ummah became at the tails of nations due to its deviation from the law of its Lord and the betrayal of its leaders, Allah (swt) sends someone who would be recruited to lead the Ummah of Islam for true leadership and to renew for it its religion. Sheikh Taqi al-Din al-Nabhani, who was guided by Allah to follow in the footsteps of the Prophet (saw). This renewed leader was aware of the conditions of the Ummah and was aware of the origin of the disease and prescribed the remedy. He set his goal and made it the title of his work “The resumption of the Islamic way of life by establishing the Khilafah (Caliphate) State” that will uproot the existing world order, change the face of the world and restore leadership to the Ummah of Islam that will bring about an unprecedented revival.

This leader established his party and explained its thought, method, and goal, and instilled that in his followers, and he was certain that his goal would not be achieved without the Ummah, wrapping around it and supporting it, so he worked to take its leadership to make it recognize the right path to revival, to regain its authority and restore its glory and dignity, which is what he adopted and he stressed to his Shabab the necessity to join the Ummah and live with it and to take care of its affairs and warn it of the dangers that threaten it so that they will gain its confidence and be able to convince it of the good that the party wants for it – as a leader and the forerunner that does not lie to its people – by its support for the Hizb and its idea and its work with it to achieve its goal.

If the enemies have worked, and still working – and striving hard to create new leaderships for the Ummah after they revolted against the first leaders who have afflicted them by the scourge and seeking to fight the sincere leaders – to which the Ummah can turn their attention and hope for salvation – by restriction and prosecution at times, imprisonment, arrests, and murder at other times, this has not and will not distract the sincere sons of the Ummah from fulfilling their responsibility towards their Ummah and towards all of humanity. (لِيَقْضِيَ اللَّهُ أَمْراً كَانَ مَفْعُولاً وَإِلَى اللَّهِ تُرْجَعُ الاُمُورُ) “so that Allah might accomplish a matter already destined. And to Allah are [all] matters returned.” [Al-Anfal: 44],