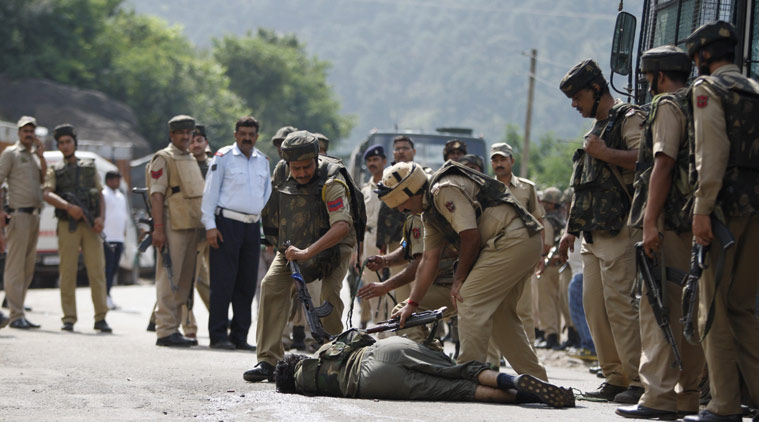 On Friday 1st March, Indian Airforce Wing Commander Abhinandan Varthaman, who was captured by the Pakistani military when his fighter jet was shot down on entering Pakistan airspace, was returned to India on the order of Pakistan’s Prime Minister Imran Khan. Khan proudly presented it as a “peace gesture” to de-escalate tensions between the two countries. This so-called peace-offering was proudly reciprocated by India’s Prime Minister Narendra Modi on the same day, by heavy shelling on the Pakistani side of the Line of Control by Indian troops which killed two Pakistan soldiers. This was followed the next day, by the return of the body of Shakir Ullah to his family by Indian authorities – a Pakistani prisoner, who was savagely beaten and stoned to death in an Indian jail in revenge for the attack on Indian troops in the Pulwama district of Indian Occupied Kashmir. His body was handed over at the Pakistan-India Wagah border – the same location where Indian Commander Varthaman had been returned to Indian hands just a day earlier – adding further to the bitterness of this act of self-inflicted humiliation by Imran Khan.

Rather than using the capture of the Indian pilot to pressurize India to release those thousands of innocent Muslims imprisoned by the Hindu state for standing against its brutal occupation of Kashmir, Pakistan’s ruler uses it as an opportunity to call for peace with a mass murderer which has the blood of tens of thousands of Muslims on its hands. Instead of responding with military force to the savage occupation and vicious persecution of his Muslim brothers and sisters in Kashmir – which includes thousands of enforced disappearances, torture, rape, blinding with metal pellets and extrajudicial killings and slaughter – he calls instead for peace, normalization and improved ties with this aggressor and usurper of land, and labels acts of resistance against occupation as “terrorism”. According to the Association of Parents of Disappeared Persons, over 8,000 Muslims in Indian Occupied Kashmir have been abducted by Indian security forces. Their whereabouts are still unknown.

Occupation, slaughter, and brutality inflicted upon the Believers should not be met with olive branches and calls for compromise and normalization with the murderous Hindu state, which reflects nothing but weakness and submission to this enemy of Islam. Rather it demands the liberation of the Muslims of Kashmir from the clutches of their oppressors by mobilizing Pakistan’s formidable army – indeed the world’s 6th largest army – to defend their Ummah as commanded by Allah (swt): وَمَا لَكُمْ لاَ تُقَاتِلُونَ فِي سَبِيلِ اللّهِ وَالْمُسْتَضْعَفِينَ مِنَ الرِّجَالِ وَالنِّسَاء وَالْوِلْدَانِ الَّذِينَ يَقُولُونَ رَبَّنَا أَخْرِجْنَا مِنْ هَـذِهِ الْقَرْيَةِ الظَّالِمِ أَهْلُهَا وَاجْعَل لَّنَا مِن لَّدُنكَ وَلِيًّا وَاجْعَل لَّنَا مِن لَّدُنكَ نَصِيرًا “And what is [the matter] with you that you fight not in the cause of Allah and [for] the oppressed among men, women, and children who say, “Our Lord, take us out of this city of oppressive people and appoint for us from Yourself a protector and appoint for us from Yourself a helper?” [An-Nisa: 75]

Imran Khan has tried to toy with the Islamic sentiments of the Muslims of Pakistan by talking repeatedly about his vision of shaping Pakistan upon the template of the Madina state established by the Prophet ﴾. However, his submissive dealings with the Hindu state are far from Islam, and the antithesis of the actions of the magnificent Madina state and the glorious Khilafah that followed it which ruled by Islam alone, defending the blood of the Muslims and fighting for the interests of the Deen. Rather, his ‘peace-making gestures’ with an occupying and murderous regime, simply flout his credentials as yet another puppet to the US, aiding its agenda to make India a regional power for the sake of American interests while Pakistan capitulates to the Hindu state on every front. What a huge insult this is to the magnificent legacy of the great general of Islam, Muhammad ibn Qasim, who on the order of the Umayyad Khalifah, Al-Walid ibn Abd al- Malik, rescued those Muslims who had been captured by the Indian Hindu king – Raja Dahir – liberating the whole of Sindh from the despotic Hindu rule in the process.

This month of Rajab marks the anniversary of the destruction of the glorious Khilafah. It should be a reminder to this Ummah of the distinguished caliber of leaders that we lost when this state was removed from our lands. In their place, we are plagued with spineless rulers who place their necks under the feet of the enemies of Islam who persecute, rape and murder Muslims. Indeed, earlier this month, it was reported that police burnt down around 250 Muslim homes, businesses and a mosque in Meerut, Utter Pradesh, India, while Imran Khan continues to be the cheer leader for normalization of relations with this anti-Muslim regime, rather than instilling fear into its heart such that it dares not harm a single Believer. Truly the Muslim Ummah will have no security and no honour in the absence of this System of Allah (swt). Therefore surely, if we wish to see an end to the occupation of our lands, and the persecution, suffering and slaughter of Muslims across the world, we must place our attention and exert our full efforts on establishing the Khilafah Rashidah – the Righteous Caliphate based upon the method of the Prophethood.

“Allah has promised to those among you who believe and work righteous deeds, that He will, of a surety, grant them in the land, inheritance (of power), as He granted it to those before them; that He will establish in authority their religion – the one which He has chosen for them; and that He will change (their state), after the fear in which they lived, to one of security and peace: ‘They will worship Me (alone) and not associate aught with Me.’ If any do reject Faith after this, they are rebellious and wicked.”