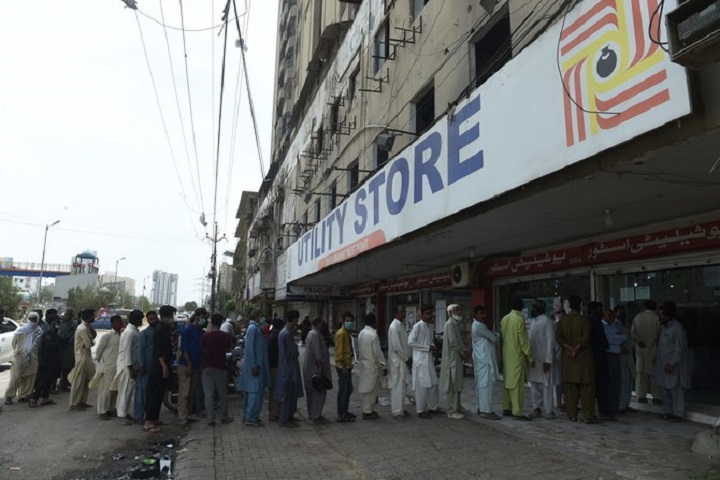 The 3 November 2021 address of Pakistan’s Prime Minister, Imran Khan, regarding inflation was to prepare opinion for another batch of catastrophic IMF economic policies. The so-called 120 billion Rupees “relief” package announced for 20 million people, amounts to only Rs. 1,000 per person per month, for six months. This is whilst the middle classes and poor are crushed by inflation, with sugar at nearly Rs. 150 per kg, cooking oil is at Rs. 350 per kg and the unit cost of electricity is over Rs. 20. Yet, submitting to the American economic order, Pakistan’s rulers tie the local currency to the dollar, causing the Rupee to depreciate by more than 55% against the dollar since August 2018, unleashing rampant inflation with the plummet in the purchasing power of the Rupee. However, the regime of “tabdeelee” (change) refuses to issue currency based on gold and silver, as the Messenger of Allah (saw) declared, despite its claim that it wants to establish a state like Madinah. Indeed, the failure of every civilian and military leadership is because they all shackled Pakistan’s economy to the current international order.

Inflation in the Khilafah state is eliminated through the legal rulings of the system revealed by Allah (swt). As Riba (interest) is Haraam, the Khilafah will refuse to pay the current Rs. 3,000 billion annually spent on interest payments, releasing large funds for the Islamic obligations. The Khilafah state will develop heavy industry, infrastructure projects and telecommunications as state property. It will efficiently supervise the public property of energy and minerals. It will thereby end the looting of trillions of rupees from the common man, to line the pockets of private investors and multinational companies, after privatization. The Khilafah will end the dollar hegemony by issuing currency based on gold and silver, ending rampant inflation by preventing the relentless printing of fiat, paper money to service government debt. The Khilafah will bring direct relief to all people, businesses and industrial units, by eliminating all indirect taxes and many of the regressive, direct taxes upon goods and services. The Khilafah will not impose any taxation on imports for its local traders, Muslim or the non-Muslim Dhimmi, so any benefit of lower prices in the global market can be passed on to the citizens. Unlike the elite capture in Democracy, where laws are made for the benefit of a select capitalist elite, in the Khilafah the Shariah state laws cannot be manipulated, as they are derived from the Noble Quran and the Blessed Sunnah. The Khilafah will immediately impose punishments on monopolies, cartels and hoarders. No one can buy the courts of the Khilafah, with its swift decisions based on Shariah law. The Khilafah will provide food security for the region by implementing Islam’s radical laws regarding agricultural lands. And the Khilafah State will directly guarantee all basic needs for all its citizens, regarding of race or religion.

O People of Power! The truth has become clear. Whilst America’s economic order dominates us, there is no need for yet another failed experiment, at a time when the Muslims of Pakistan are deprived of even two meals a day. It is time to bury this rotten system and order. During the season of ‘Ukaz forum, and other such occasions, the Messenger of Allah (saw) himself would communicate not only glad tidings pertinent to the Garden (Paradise) but also news of promising prospects for the true believers in the Call of Islam. He would openly tell them that they would surely prosper, rule the whole of Arabia and subdue Persia, if they professed the most serious pillar of Islam, i.e. the Oneness of Allah (Tawhid). Thus, we invite you to follow our Beloved, the Messenger of Allah (saw), and become Ansar of this Deen Come forth to make Tawhid the foundation of the state and the Khilafah. Reject this American economic order and start a new world order based on Islam. Grant the Nussrah to Hizb ut Tahrir so that it can lead you in this project. So, respond!