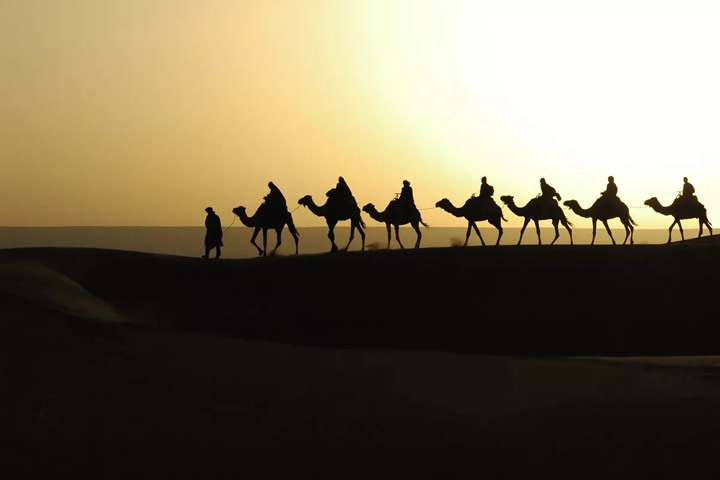 “This day I have perfected for you, your religion and completed my favor upon you and have approved for you Islam as religion” [Surah Al-Ma’idah: 3]

When Allah (swt) completed His Revelation to the Prophet Muhammad (saw), the Aqeedah, ideology, speech, and actions of the Arabs had changed so significantly that they transformed from being ignorant, ruthless, weak and backwards, to the best and most distinguished people to walk the earth.

With Islam, the people of the desert became the great Companions of the Prophet (saw) and struggled together with him (saw) until all darkness was driven out and the light of Islam penetrated all parts of the Arab lands. This light was so pure and powerful that it changed them inside out, from the individual level to that of the state. We see from the emotional expression of Jaafar bin Abi Talib (ra) in his response to the Najashi how Islam had changed the ignorant Arabs of Makkah:

“O King! we were plunged in the depth of ignorance and barbarism; we adored idols, we lived in unchastity, we ate the dead bodies, and we spoke abominations, we disregarded every feeling of humanity, and the duties of hospitality and neighborhood were neglected; we knew no law but that of the strong, When Allah raised among us a man, of whose birth, truthfulness, honesty, and purity we were aware; and he called to the Oneness of Allah, and taught us not to associate anything with Him. He forbade us the worship of idols; and he enjoined us to speak the truth, to be faithful to our trusts, to be merciful and to regard the rights of the neighbors and kith and kin; he forbade us to speak evil of women, or to eat the substance of orphans; he ordered us to flee from the vices, and to abstain from evil; to offer prayers, to render alms, and to observe fast”.

Truly, Islam was sent to perfect humankind and to create absolute beauty, peace and justice upon the earth. After 13 years of building and strengthening the iman and taqwa of the Companions, the Prophet (saw) received the wahi (revelation) to migrate to Yathrib, through the political efforts of Mus’ab Ibn Umair (ra) in Islamizing and winning the public opinion of the Aus and Khazraj. The transformation of Yathrib, as a Kufr State, into Madinah Al-Munawwarah as an Islamic State, marked the beginning of the conquest of Islam and the perfect implementation of Sharia throughout the Arab lands and subsequently to other non-Arab lands, resulted then to the lifting of all darkness from the people and humankind was able to return to the pure worship of Allah (swt).

For over a millennium, the Khilafah continued to be the superpower of the world, and even became the protectors of the innocent, be it Muslims or non-Muslims and be it inside or outside of its territory. Whenever Islam entered a new land, it would drive out people from all kind of darkness, oppression, or injustice. Suffice to say, the Islamic civilization in Spain left a profound imprint in the Iberian Peninsula and Europe, producing a beacon of thought, education, and culture. No one can forget the heroism of the great Mamluks in defeating the Mongol horde and stopping their vicious reign of terror on to the east and west. Furthermore, one is left humbled when enlightened by the might of the Ottomans, until even the Europeans used to fear it and seek protection from it, as evident from the famous story of Suleiman the Magnificent rescuing the King of France from the tyranny of Spain, and many others.

With the harrowing fall of the Khilafah, the kuffar and the traitors of the Ummah were able to carry out all their evil plans. After successfully taking away the guardians of the Muslims, they then took charge of the Muslim lands and controlled this noble Ummah. Every inch of the Islamic land was colonized by the kuffar and the united Ummah had, ever since, divided and weakened day by day.

Soon after, the Blessed Land of the Muslims, Baitul Maqdis was “officially” taken over by the Jews resulting from the Balfour Declaration, and from then on, no Muslim leader or army came to its rescue. The people of Palestine were tortured day in day out and the same fate befalls other Muslims throughout the globe. The Ummah has, from then on, lived in a bloody and bitter reality.

With the fall of the Khilafah, the Muslims lost their honour and identity. The West not only managed to conquer the Muslims lands, but also managed to implant their capitalist-corrupted ideology into the Ummah’s mind. The Ummah’s golden history and thought failed to continue after the fall of its great political institution.

The West did not stop there. They continually plan to change the entire narrative of Islam, primarily aiming to destroy the idea of Khilafah and Jihad, thus making Islam only a religion of personal worship, but never to have authority beyond the mosque. They have been doing everything they could in order to make sure that the Muslim superpower state will never come back. The West knows very well that without Khilafah, they will dominate the world without any significant challenge from any party.

Other than political dominance, the West also never stop trying to destroy the Islamic Aqeedah completely if they can, and to replace it with a liberal and hedonistic way of life like theirs. If they are able to do so, then the Muslims will be in the weakest condition, and this will prolong their dominance of the world. They had put tremendous effort to carry their hideous plans and to a certain extent, they succeeded. For a hundred years, Muslims have been living in misery and this has reached to such a critical point where evil and darkness seem to dominate today’s world. For a hundred years, without the Khilafah, the West succeeded in dominating the world without Islam to challenge them.