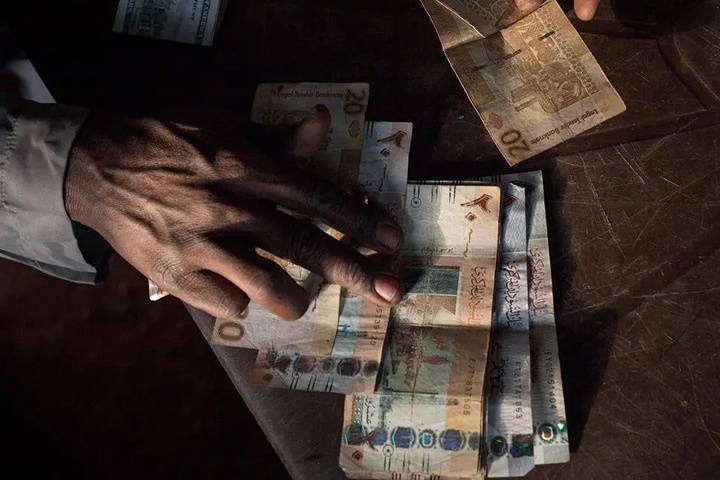 In a press release issued by the Central Bank of Sudan on 21/2/2021, it announced the adoption of a flexible, administered exchange rate policy for the purpose of unifying the exchange rate, to achieve nine points, most notably the fourth point of the statement: “Attracting foreign investment flows”. This policy comes from the Transitional Government as the last step to complete the implementation of the IMF prescription, after the government lifted subsidies on most goods and services, which the IMF kept demanding their price rise for the people of the country!

The source behind the economic and financial policy pursued by the Transitional Government is the kaffir colonial West and its institutions. With the transitional government’s signing, in September 2020, of programs of the Observer Monetary Fund, the government has accelerated the implementation of the fund’s prescriptions by removing subsidies on bread, fuel, and electricity, thus making people’s lives hell, and the revolution of the hungry began, so the Transitional Government hesitated and changed its skin in its second version, but instructions came from its masters to continue implementing the move to float the currency, as stated in the statement issued by Philip Ackermann, Director General for Near and Middle East, Africa and Latin America at the German Foreign Ministry in the conclusion of the Friends of Sudan Conference, which was held in online from Berlin on 28/1/2021.

The closing statement stated: “We stress the urgent need to address exchange rate reform without further delay” (Elaph, Issue 769 on 9/2/2021 CE), and on the same date, the US State Department spokesperson stressed on the Sudanese government “to proceed in particular with urgent economic reforms” (Al-Hurra website), of course he means by “economic reforms” to implement the fund’s prescription! British Foreign Minister Dominic Raab said, in the joint press conference with the Sudanese Foreign Minister in charge, at Khartoum Airport, on 21/1/2021: “The United Kingdom is ready to provide a progressive loan of 330 million sterling pounds to settle the arrears owed to the African Development Bank, if Sudan continues on the right track of the economic reforms agreed upon with the International Monetary Fund” (Russia Today).
On 14/2/2021, the head of the European Union mission in Sudan, Robert van den Dool, said, “Sudan must carry out comprehensive and rapid economic reforms” (Reuters).

World Bank President David Malpass welcomed the government’s compliance with their instructions, saying: “We welcome the news coming from Sudan about the unification and stability of the exchange rate. The Bank of Sudan has identified nine benefits for the people, including reducing smuggling, increasing financial flows, aid and investment.” (Al-Sudani Issue 5254) All this proves that this economic policy and floating the exchange rate are external dictations from the kaffir West countries and their usurious institutions.

This step by the Transitional Government is to satisfy the kaffir West, which wants to create conditions in Sudan for the introduction of its wealth-plundering companies, following the Paris Investment Conference in Sudan, to be held next May, and which the French President Macron invited the Government of Sudan for 14/1/2021. And this is what was indicated by the fourth point in the statement of the Bank of Sudan, and it is the same as what the statement of the American embassy in Khartoum referred to, coinciding with the statement of the Bank of Sudan! Welcoming the bank’s statement, it said, “The government’s decision will increase international investment” (Nabd News).

O Our People in Sudan:

After a hundred years have passed since the destruction of the Khilafah (Caliphate), and the absence of Islam from power, what have we gained from living under the doctrine of separation of religion from life, and ruling by other than what Allah (swt) has revealed, and the rule of disbelieving Western agents who do not hide their subordination and are not ashamed of their full compliance with the instructions of their masters. They continue to make you live in poverty, starvation, and miserable living, and even allow the enemies to laugh at our misfortune! The report of the United Nations Office for the Coordination of Humanitarian Affairs (OCHA) stated: “9.6 million Sudanese have suffered and are still suffering from severe food insecurity, and that the price of the food basket rose to 200% in the period from April to September 2020!” These puppet rulers commit all these crimes against the people of Sudan, without hesitation.

“…They enjoin what is wrong and forbid what is right and close their hands. They have forgotten Allah, so He has forgotten them [accordingly].” [At-Tawba: 67]

O Our People in Sudan:

The masks have fallen off the agents, and the confrontation has become direct between the Islamic Ummah and the colonial kuffar, and the Khilafah is the project of salvation and is the lifeline, it is an obligation from the Lord of the worlds on the neck of every Muslim «وَمَنْ مَاتَ وَلَيْسَ فِي عُنُقِهِ بَيْعَةٌ مَاتَ مِيتَةً جَاهِلِيَّةً» “And he who dies, and there is no pledge of allegiance (Bay’ah) on his neck, dies the death of the days of ignorance.” By Islam alone, liberation is achieved from the kaffir West and its corrupt civilization. By Khilafah alone we build our revival, resume our Islamic way of life, and achieve our vital issue, so we carry this great good to the worlds, break the bonds of Capitalism, liberate humanity, and please our Lord, and that is the great victory.