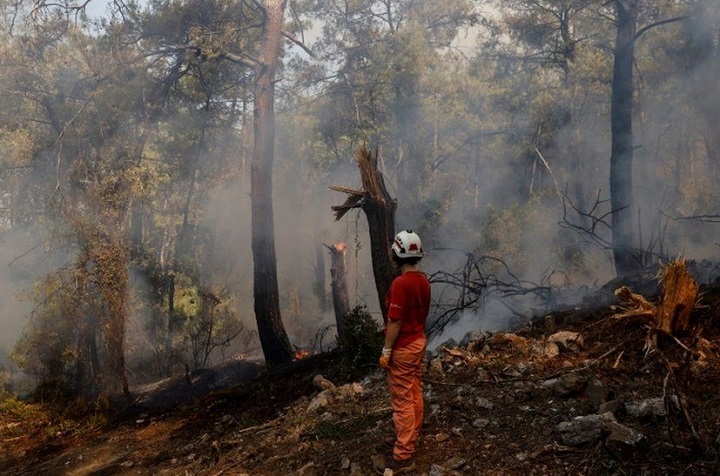 On July 28, 2021, at noon, forest fires occurred at 4 different points in Antalya’s Manavgat district. 960 personnel, 1 aircraft, 1 UAV, 19 helicopters, 201 water sprinklers, 30 earth movers and 30 water tenders are responding to fires… Houses in areas that could be affected by fire were evacuated. 320 cattle, 3,000 sheep and goats, 22 banana greenhouses, 15 vegetable greenhouses, 360 beehives and 15,000 decares of agricultural land were damaged by the fire. (https://www.afad.gov.tr/ulke-genelinde-devam-eden-orman-yanginlari-hk-2)

According to the news on the official website of AFAD (The Disaster and Emergency Management Presidency), the first fire started on July 28, 2021 at four points in Antalya’s Manavgat region at the same time. In the statements made by the Minister of Forestry Bekir Pakdemirli regarding the subject, it was stated that there was an environment for the spread of the fire due to the windy and dry weather. After Manavgat, fires started in many places and forest fires have occurred in 144 places so far. While some of these fires were extinguished and some of them were taken under control, fires continue at full speed in 10-15 regions.

However, according to these figures announced by the authorities, the forest fires that firstly started in the Manavgat region, could not be extinguished, and the fire spread to other areas, the forests in many regions began to burn and are still continuing to burn.

Although the burning of the forests and the fact that the people living in these regions are out of their homes, animals and gardens make us grieve humanly, we would like to make some evaluations regarding these fires. However, we do not want to discuss issues such as who was behind the fires or how they started. While it is possible that it was carried out by the PKK, as in some claims,it may have been created intentionally for the purpose of building a hotel, or by children or it may have been started naturally. Because the prominent issue in these fires is not the cause of the fire, but the following issues after the fire.

1-  The most important reason why the fires spread so quickly and cannot be extinguished is the remissness of the rulers and their looking after only their own interests. Due to the conflicts and interests between the government structures, 6 serviceable aircraft that are in the hands of the Turkish Aeronautical Association (THK) with a water carrying capacity of 4,900 LT were not used. According to the Minister of Forestry and Erdogan, these planes are outdated (!). As a matter of fact, these arguments are the same arguments that took place in the forest fires last year.However, on the other hand, the following statements were made by THK:” Currently, our 20 vehicle including 3 Beriev BE-200, the fire extinguisher amphibian with water carrying capacity of 10 thousand-liter, 15 MI-8 general purpose helicopters wih 2500 liter water capacity, 2 CH-47 Chinook general purpose helicopters with 7500 liter capacity are responding to the forest fires in every region of our country including the forest fires in Manavgat continuously.”(https://tr.euronews.com/2021/07/29/akdeniz-ulkelerinde-kac-yangin-sondurme-ucag-var-orman-yanginlari-thk)

2-  The Ministry of Forestry initiated a tender on January 29, 2021 to lease 5 aircrafts with a capacity of 10 thousand and 5 thousand liters. THK with a capacity of 4 thousand 900 L (100 L less) could not participate in this tender. The specification was deliberately prepared in this way. With this tender, three planes were leased for 153 days with a price of 203 million 107 thousand liras from the company that made the highest bid. Therefore, these planes consist of three of the planes currently being used in fires. In other words, Turkey does not have its own firefighting aircraft. Even Greece, which has much smaller territory than Turkey, has 38 firefighting aircraft.

4-  If the administrators in Turkey were serious about preventing the forest fires, they would have made the necessary preparations years ago. Because as of 2002, THK had 19 firefighting planes and they were responding to fires immediately. Currently, (due to the administrators who do not like the planes in the hands of THK) Turkey does not have its own firefighting aircraft. Because these rulers see fires, floods and earthquakes as opportunities for their own interests. They see each disaster as new tender and money opportunities, and their eyes are out on stalks. In such disasters, they only cry crocodile tears. They see the realization of their own interests as more important than solving the problems of the Ummah. As a matter of fact, a mayor from AKP was able to desist from saying in a live broadcast regarding the fires: “Instead of the burned houses, we will build houses with very low interest rates and repayment of twenty years.Even those whose houses were not burned will wish if their houses were burned also.” (!) In fact, while the forests were burning, Erdoğan was throwing tea packets at people like throwing a bone to a dog from the campaign bus in Marmaris.

5-  Interestingly, in the day that the forest fires started, “Law on the Amendment of the Tourism Promotion Law and some Laws” was published in the Official Gazette dated 28 July 2021 and numbered 7334. According to the “d” subclause of 1st clause of this law, forest lands can be opened to tourism investors by being included in the scope of “public interest” even if they are “outside the Culture and Tourism Development Zones”. All immovable in these areas whose “location, capacity and borders will be determined and announced by the President’s decision” will also be included in the scope of tourism. With this law, it would be possible to build new hotels in burned forest areas. However, apparently, things may not go as planned and they could not control the fire and extinguish it. The fire will burn them too.

6-  All these aside, one of the most important signs of these fires is this. Despite the corona pandemic, in order to increase tourism revenues, Erdogan and his entourage showed all kinds of convenience for tourists to come from Russia, and lifted the quarantine measures.Only mosques were exempted from this. They disregarded the orders and prohibitions of Allah in order to get inflow of foreign currency. They thought it would prolong their life. However, these fires and what happened after them seem to upset both Erdogan and those around him. On the one hand, tourism areas were seriously affected by the fires, on the other hand, their incompetence and arrogant attitudes were not welcomed by the people. These events comprise basis for developments that will shorten their lives with each passing day.

7-  However, despite all these events, Erdogan will not accept responsibility and guilt, as he always does. Although all orders came from him, he will bill it to some ministers. He will discharge some of them. In this way, he will play innocence by creating the image that the ministers cannot do their job properly and he is not to blame, and that it is not normally possible for him to keep up with everything.

“The wrongdoers will come to know what ˹evil˺ end they will meet.” [Surah Ash Shu’ara: 227]