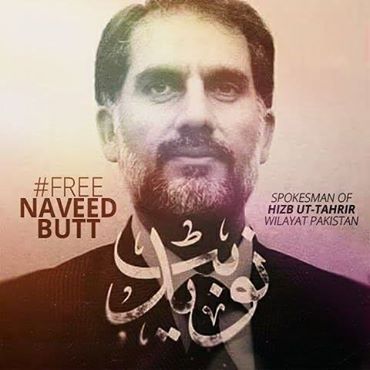 Bajwa-Imran Regime Fails to Comply to the Production Order in the Missing Persons Case of Naveed Butt, but Springs to Action at Every Demand of its Colonialist Masters
The Official Spokesman of Hizb ut-Tahrir in the Wilayah of Pakistan, Naveed Butt, remains in abduction since 11th May 2012.

On 27 December 2017, the commission issued a production order that substantiated the fact that Naveed is held by the intelligence agencies.

It was issued to the relevant government authorities but Naveed Butt has still not been produced in any court of law.

The case of Naveed Butt confirms that the current system is blind when it comes to justice for Muslims, springing to life only to serve the colonialists.
O Muslims of Pakistan!

The rulers of Pakistan rapidly restored the attacking Indian fighter pilot Abhinandan to his family in “compassion,” but heartlessly deny Naveed even a single phone call to assure his family of his safety, in over seven years.

So let all fair-minded Muslims demand the release of Naveed Butt.